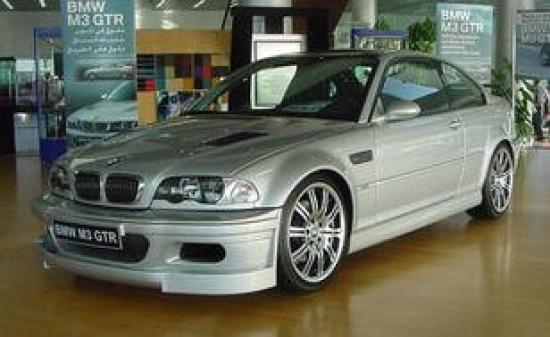 @BR2
Trust me, they ride like absolute shite. True, you'd think they'd be able to soak up bumps riding that high, but these aren't 4x4s. Like I said, the suspension has to be very, very stiff in order to protect the fenders when such huge wheels are stuffed into them. The ones I've had the misfortune of seeing have no give whatsoever. Doesn't help that those tiny little tires are rock hard and don't absorb any shock at all. I saw one guy actually lose control of his car because it bounced so violently when he hit some debris in the road. Would've been hilarious if he hadn't been just two car-lengths ahead of me at the time. Luckily I've got great brakes.

I never did wonder about the ride quality, I actually dont think it would be that bad, Given how tall the cars are, They may just glide right over bumps, Dunno, But im more curious on how they get in and out of the cars?..

And cmon, We would all be very excited to drive that Turbo Mustang, Admit it, We would be giggling ike a bunch of school girls, It looks rediculous, But not bad, Toned down would be better, But its workable. Get rid of that blower, Spoiler, Smaller rims and spliter, And it looks great.

@BR2
I might be wrong about this, but I think the name "Donk" is derived from the sound cars like that make when they hit even the slightest imperfection in the road. As you can see with those poor Camaros, there's no room for suspension travel at all, so you can imagine how stiff the ride has to be to keep the tires from chewing up the fenders. Makes an Exige feel like a Maybach.

That is a horrible yet hilarious name for a car LOL Donk!

And anyone who does that should be castrated, Specially to a ZL1!

I think big rims look great, Even making a car look much better, But not this kind of shit, Thas straight heracy.

Pleas, Give me the adresses to all these people, So i can go kill them myself.

WARNING: Looking at these images may cause, Anger, Hilarity, Sadness, Wtf-ness, Murderous Intent, You have been warned.. 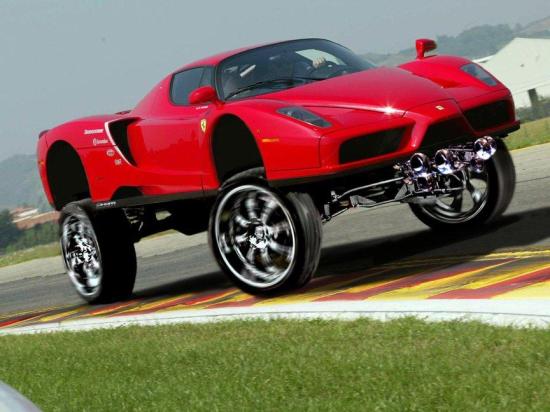 im glad that we dont have these cars in europe.
they are even worse than the hella flush community.

@ BR2+: A donk is a custom car that has been lifted and fitted with gigantic wheels with very low profile tires.

It blows my mind and sometimes even appauls me what people do to their cars. Donks are very popular around where I live and I think they look retarded. Anyone who lifts their car and puts gigantic wheels with tiny paper thin tires on their vehicle obviously knows absolutely nothing about cars and cares more about how their car looks than how it runs and in their tastelessness thinks it looks cool.

BTW, the Camaro representing "Turbo" is not THAT hopelessly bad. It is childish and overdone, but not completely ruined.

But I fu-king HATE those raised up Camaros!... Tasteless vandals! And why a ZL1, WHY???

And here is another one! Also a Civic, from Russia with love! 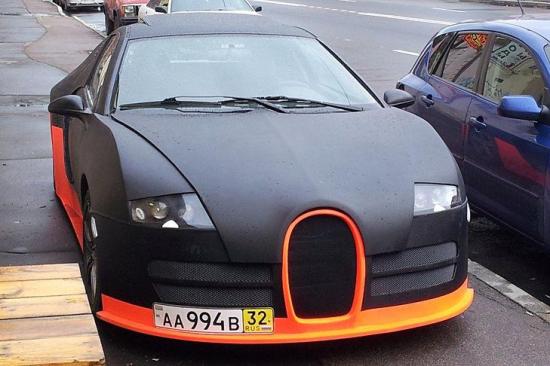 The only reason why to love the Underground series is the gameplay. It was really exciting. But indeed, they could have included more exotic vehicles there... And the physics were crappy. That's why I much prefer Most Wanted, which is one of the best racing games.

Pretty much every pre-Carbon NFS games were cool. But after they definitely have lost the charm... Well, Hot Pursuit 2010 had an excellent variety of cars with schick graphic, exhaust notes and physics!, but the gameplay was crap... And now with latest production it's getting just worse...

I guess this one produces more than 500 hp, and the owner is the king at black jack and is the polygam male.

This one has the only one deserving competitor ā€“ Devel Sixteen.

Oh, and now this is the masterpiece of my local tuningwerk. Zazupra! 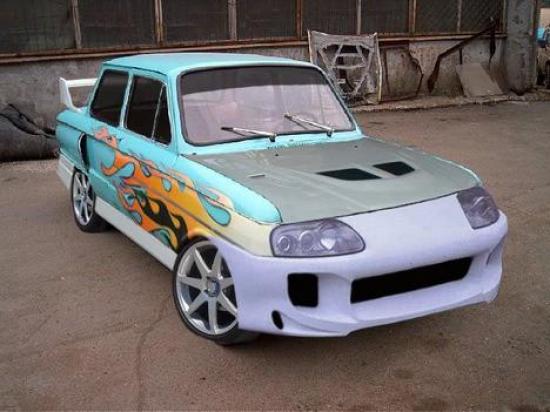 @Shaggy
You are right, spoilers like this were introduced in 1968, the car in the picture is a Lotus from the year 1969. Just a year later these high mounted were prohibited.

@lafars
I know, and that makes it even worse, IMO. Not only was it made to advertise a kiddy movie that had NOTHING to do with cars, but it was a movie that ended up being a massive flop, so it was all for nothing. And I can't be the only one who sees something inherently wrong with a supercharged Camaro being used to advertise a movie called "Turbo".

@BR2
Driveable, maybe. The question is, would you want to drive it? Personally, I'd rather shoot it until it resembled a giant metal sponge. And then blow it up. And then gather the scrap together and have it crushed into a cube. And then piss on said cube, have it melted down and fashioned into a lamp. Which I would then shoot. Sure, it may not be that bad in comparison to some other things, but seeing an American car RICE'd out like that makes me want to dropkick a nun. Ignoring the fact that the Camaro is actually built in Canada, and uses a chassis that originated in Australia...

That gold Camaro, though...No comment. There are no words to describe the level of violence I would love to inflict on the knuckle-dragging clown who did that.

@ BR2+: I agree with you, especially about the donked out Camaros, that just looks stupid.

@ Fangio Man: I know spoilers were introduced around that time period.

@BR2
Which racing series that Scion is from?

that Camaro makes me want to punch someone

Its actually real and drive able! But to be honest i dont think it looks that bad, Stupid, but not to bad, Beyond the crazyness. 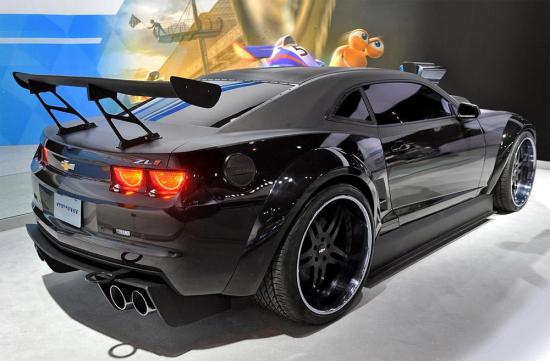 But THESE right here, Are straight up UN called for, There owners should be Burned, Castrated and Decapitated. 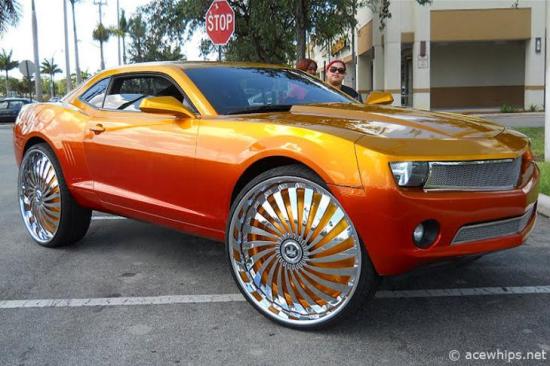 Look in the background of the camaro, that camaro was produced to advertise "turbo"

@BR2
My good sir, I believe you have just won at life. I haven't laughed that hard in ages! That silver thing with the "jet nozzles" hanging out of it actually made me spit Mountain Dew all over my keyboard. And that RV...I take comfort in the idea that it has to be something made as a joke or for some kind of ridiculous contest. And the fact that it's a piece of crap RV.

However, that Camaro makes me want to punch someone. It's bad enough when people put those retardedly huge wheels on them(I look forward to their first run-in with a nice-sized pothole).

@Shaggy
Almost, only a year away. ;D

Got you beat. At minimum 8,000Lbs of Downforce at 32Mph, That race car wouldnt stand a chance against these behemoths. Nah man, Don't you know? Any Enormous spoilers like these in fact produce much more downforce then cars like a P1 or S7 Simply putting a big spoiler on instantly gains huge results, Wooden spoilers work the best. This guy at maximum prolly doesn't go past 110Mph due to all the downforce he is producing. This guy would prolly set the HillClimb Record! A LaFerrari wouldn't stand a chance against this thing in ANY form of race, Game Ova.

Those bodykits serve no aerodynamic function, therefore they are useless and ugly. A kit would have to be aerodynamicly tested in a windtunnel so that it has the best possible efficiency (credit to the "veyron" for at least trying)

Nfs shift becomes an exception to this because it's pro-racing

As NFS fans, I didn't even see all NFS Hero cars in the movie. And that makes me upset. All of this hero cars is not appeared in the movie. Instead, it replaced by some cars that never appeared in NFS games (Except by modding of course). Yeah, I had to check other magazines and they all say the same. Pretty ...

Pretty insane performance... I believe it has about 370-380 horsepower.