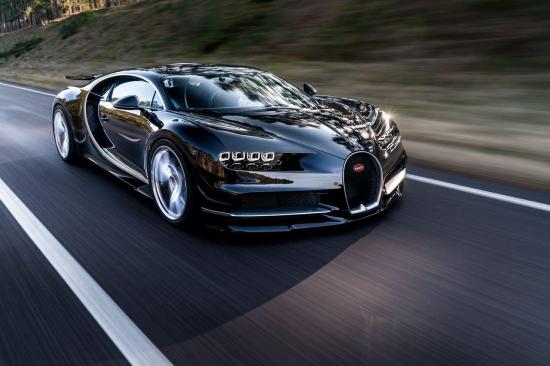 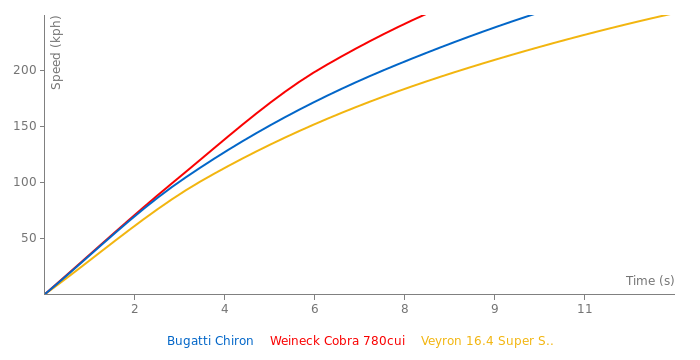 Quote>"Customers and prospects who have not yet made up their mind, may need to speed up: Of the 500 vehicles planned for the Chiron family, more than 450 have either been delivered or are scheduled for production at the Atelier in Molsheim. So there are less than 50 vehicles available for order."

She's nearly finished her sales cycle. In a way I'm glad but that means there's only 12-18 production left.

If we look back she's been a commercial and profitable success and a crtical one too. I think when history looks back to remember her she'll be remembered as and regarded as one of the finest ever.

That's really all I can say.

For a car weighing over 2 tonnes, ofcourse it has the power and torque but still.

Current "record" is 17.95 seconds with a car with a far superior power to weight ratio.

Taking into account that Bugatti have nearly finished the production run there are HUNDREDS of these stock production cars delivered.

Then provide a Source plus Citation plus Quotation.

The above figures are verified. Contact Bugatti or Racelogic or the TUV.

It's in datasheet you provided, just few lines below.

You do understand "elasticity" is a measure of flexibility of cars power and torque whilst already rolling and motion right? To overtake? That's an IN gear figure. As opposed to standing start smashing through the gears. It's probably measured in the SAME gear. It doesn't state so though. Completely different measuring criteria.

There is no info about it being measured in the same gear and most probably it's not. If I have to guess, it maybe reaction lag or downshift time count in.

Well the Bugatti stuff I'm moving away from slighlty too. As I said to someone some of these hypercars come with too much "baggage". There's always something up! Ha!

Nevertheless, great to see someone still discussing it! Have a nice day!

Oh don't worry. All different kinds of (slight) divorce! There's amicable ones and ones where a mistress is involved! LOL!

Loris Biocchi Ehra Lessien pre production prototype Bugatti Chiron in the National Geographic Documentary>276.51MPH converted from 455km/h, it's on the clock and the cars speeding. You can see movements and reflections in the dashboard/windscreen.

Now ultimately there ARE Bugatti Chirons that are electronically NOT limited and Andy Wallace confirms he's driven one in testing leading up to the record breaking 304.773MPH run.

The car's DEFINITELY got that in it as the Bugatti Veyron Supersport hit 270MPH rounded up peak speed.

The Bugatti Chiron is aerodynamically FAR superior, beyond just raw numbers and has superior firepower. 22.22% more.

The ex boss and head of technical development of Bugatti stated it was capable of 285MPH. Previously the Bugatti Veyron Supersport went over their estimations and calculations.

The rumours swirling around before it's release were 292MPH or 470km/h.

Can she go that high? Well my calculations come in at under that figure and on a good day at Ehra Lessien I absolutely believe she'd get very close. She's stable AF at high speeds. Johhny Bohmer Top Gear Chris Harris have driven and/or witnessed this for themselves.

So is the screen shot absolute proof? Well, for me it is yes, not absolute but proof regardless.

Will we see a standard specifications top speed run without a speed limiter? I've a feeling we will yes!

Anyway hopefully this groundwork will be proven. Unless Andy Wallace confims what speed he hit...

Quote>"Sources close to the deal say that talks began two years ago when the Volkswagen Group approached Rimac to help it develop a hybrid version of the Bugatti Chiron. Rimac offered to create an entirely new hybrid hypercar with a naturally aspirated engine for less than it would have cost to update the existing car. Instead of buying the bulk of the new car's engineering from Rimac, Volkswagen offered the startup a merger. The sources said VW had been considering shuttering Bugatti rather than commit the investment required to make it fully electric in time."

Firstly with BOTH Porsche and Lamborghini in house AND Audi with V8's V10's and V12's between then hell they could rip the turbochargers off the W16's and whislt heavy it'd be a powerful unit, what on earth and specifically what experience or expertise do Rimac have in the design of a brand new naturally aspirated engine? They DON'T have ANYTHING. This is weird.

For the moment absolutely no comments!

So I converted Car and Driver Magazine's test results in MPH and converted them into km/h and compared them with the times from the original 0-400-0km/h PIONEERING productions record. As best as as possible with high resolution replay and 0.25 playback speed the times were WITHIN a 0.5 seconds variance. Obviously YouTube counters don't have 0.1 seconds timing capabilities or facilities so I'm VERY happy with the result.

Quote>"Well, the Michelin tires specially developed for the Chiron have been tested up to 470 km / h as a precaution, and even up to 490 km / h at their top. Incidentally, on a tire test bench for aircraft, "no car test bench can achieve these speeds," says Head of Chassis Development Jachin Schwalbe."

Please note original link is in German. I translated it. But the truth does eventually come out! The link is dated in mid 2016 and states the Michelin tyres were tested to 292.044MPH and even higher to 304.472MPH.

This was also reported in the British press the Daily Telegraph a year later to 279MPH plus+ and in the National Geographic Channel documentary BEFORE the Bugatti Chiron went into production in 2016 and on the screen it showed 285.1MPH. So Bugatti ABSOLUTLEY had the tyres for a top speed run for the Bugatti Chiron from before the get go. I guess the Bugatti Chiron Supersport project became more important. I want to know the speed of the stock model!

Where is that topspeed from? As far as i know it is limited to 420 kph and they only reached 460 kph in computer simulations.

There are two bugatti chirons.

Bugatti Chiron start at 2.4 million but yes the Tesla is a better deal but if your buying thinking of buying a Chiron you are probably pretty wealthy

The reply system is broken

So it's the fastest. It's not beautiful like the Huayra.

Why are there not stats for this car?

People often talk about the Chiron not being as special as some of the other hypercars out there. I spent a whole afternoon at my friend's supercar showroom, and we couldn't stop ourselves from gravitating back to the Chiron. The exposed engine, the ridiculously wide wheels, the carbon, the interior, the details. But the price was just fantastic. damn... I made sure I took off my denim jacket before I got near the thing. Wouldn't want to put any scratch on it.

From Bugatti's Official facebook page. These acceleration runs were done on the same day as the 0-400-0 run.

Can anybody update this please? 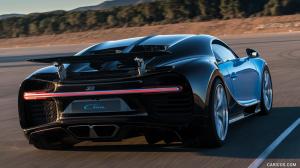 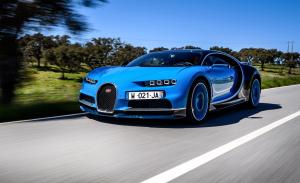 Well, Porsche gets away with it when they accuse other manufacturers of cheating. https://trinitun er.com/v4/forums /viewtopic.php?t =210733 ...

What's with the ridiculous attempts to constantly accuse Porsche of cheating? Have you been ...

Without any stupid rollout!

Well, we probably never will find out how fast it's gonna be. Considering it ...

Thing is, I can't take this car seriously. It's marketed as some kind of ...