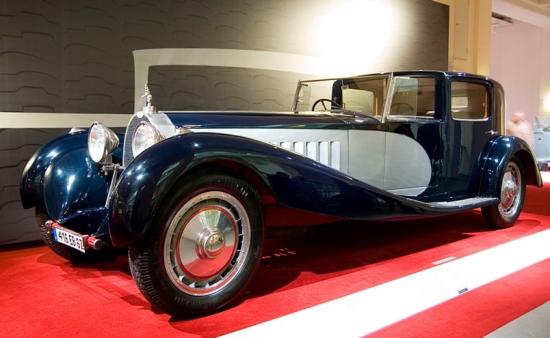 @ Fangio Man: Never, but as much as I would love to drive this car, I think that parking it would be a very daunting task. The closest I can come to that is when I had my Pontiac Grand Prix, it leaked power steering fluid, sometimes it would be completely empty and I had to park it in a parking space at work (we have the worst parking lot in the world) I had to manhandle the steering wheel. XD

@Shaggy
When did you park a 4.3 meters long, 3 ton car without power steering the last time? :D

@ Fangio Man: Your guess is probably more accurate, I'll bet it's a nightmare to try to park.

"The hood makes up half the length of the car!"

The hood makes up half the length of the car!

@Shaggy
I saw one of these in Sinsheim. I still can not believe... :D

@ Fangio Man: Awesome car, the open front and closed rear cabin remind me of a V16 Cadillac. That 12.7 liter, 775 C.I V8 has got to be one of the largest automobile engines ever built. Can anyone say big block? :D

With the Royale Bugatti wanted to create a luxury car for high ranking persons. It was intended for kings and emperors and correspondingly high were the standards applied by Bugatti in its design. Its engine was based on the prototype of an aircraft engine which had been developed by him in 1923, commissioned by the French government. The huge 8-cylinder engine had a capacity of 12.7 liters and thus was the largest unit of its time intended foar a series automobile. Cylinder and crankcas were integrated in one block. And although this gave tremendous stability to the engine in spite of the enormous combustion pressure, grinding the valves, a frequently necessary routine at that time, required to dismantle the engine and to desassemble it completely.
There can be no doubt that with the Royale Bugatti had once more succeeded in writing automobile history. But from a financial point of view this monumental vehicle was a failure. With a price three time that of a Rolls-Royce he had distanced himself too far from economical realities that were marked by the world economic crisis. It was not until 1932 that the first car was delivered, and in the end but three specimen altogether found a buyer. The prototype as well as the other specimen which had been produced were sold to collectors after the war.

SVJ on Nurb F1 track Pzero Corsa Tires No time said but I ...

If it was an Italian test then why is the text written in what ...

It would be too risky and costly for them to kidnap someone in the ...

They didn't hang MT so

Did Ferrari hang this guy for failing to meet or exceed ...

In that case, yes, it needs separate page. According to https://fastestl aps.com/tos ...

do you have a scan?