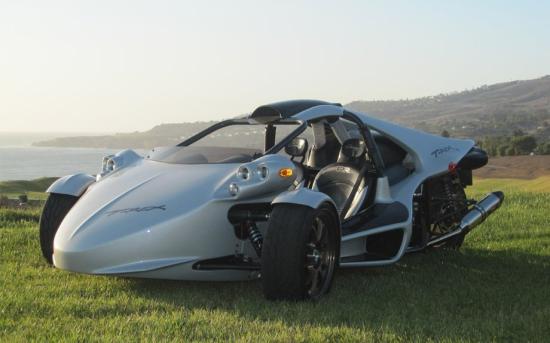 We are quite proud of that little piece of technology !!! :-)

Heuuuuu origine country USA.... Just no! He come from Canada. Province of Quebec in a small town of Boucherville.

This and Morgan 3-wheeler are probably the fastest road-legal tricycles ever. Anyway, I consider T-Rex more like a car than motorcycle.

T-Rexs have been around for years. I've seen them around but usually they are where other motorcyclists are gathered.

I don't consider them "bikes" since they have a steering wheel but that's just my opinion. I don't think Can-Am Spyders are "true" bikes but they are also listed as motorcycles.

As far as I know, any state that has a helmet requirement would also require a helmet for a T-Rex although the police would probably think of it as a car if they are unfamiliar with them.

Ps not all states have helmet requirement for this trike. It has a cage and racing seat belts.. Not sure its considered a bike in europe.

Strictly speaking you are right. On the other side this is a two seater trike type of vehicle with car like pedals and shifting. Most car sites have been testing it for a reason - its something inbetween a car and a bike. So if you wanna abide by regulations, yes in most states a bikers license is required but DO YOU see it as a bike or something that may pass as a car if you are more open minded ?

Legislation being different from state to state or province, it will vary from having a car to a motorcycle driver's license. Since it is registered as a motorcycle, legislation will usually follow the motorcycle path (IE license driver). Please verify with your local department of transport

This one might get removed. Where I live, it is considered a motorcycle and a helmet is required just like for a motorcycle.

It is a blast to be tracking this thing. What else revvs up to around 11000 rpm as a 2 seater: