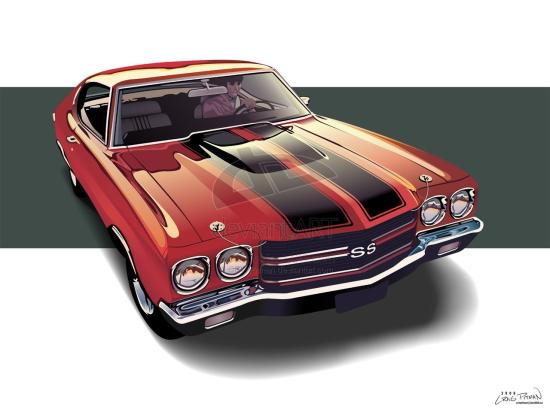 how much bph does it have

IN 1970 BACK FROM NAIM BOUGHT A NEW 454 LS5 chevelle hard top 3:31 posi m22 ROCK CRUSHER AT 6500 RPM and speed o IN THE TWILLITE ZONE WITH ON I 65 FROM BOWLING GREEN KY TO E-TOWN FOLLOWED BY 2 1970S TRANS AM POLICE CARS WITH 455 ONE BLEW UP NEAR BONNIVILLE KY COVERED 90 MILES IN LESS THAN 47 MINIETES TIRES WERE F-78-15 from my moms car dont know cicumferenc of them 2 days latter had craddock chevy dealer re glue my white vinal top back on ps one hood pin bluwe out. sorry about my penmanship I woeked as a mecanic tell recently I better at blue coller jobs than being a desk bitch

@ Kctransplant: You're absolutely right, most old school muscle cars were geared for acceleration rather than speed, that's not saying they weren't fast for their day, though.

What many people fail to realize is most big block muscle cars had their top speeds limited by gearing rather than drag. With the right gear ratio an LS6 EASILY made enough power to top out at 160 MPH. But like I said, it depends on the gear. 4.10's would top out somewhere between 120-130 because they would hit the redline there, but a 3.31 rear gear allowed the car to go much faster before hitting it's redline, given acceleration was a lot more violent with a 4.10 geared car.

I dunno about the other country but it looks like someone exports it into Japan. Cuz when my father bought it, the previous owner doesn't know how it can reach Japan. He said he just bought it from other people. The one that my father bought is the CRV transmission code. Just like this one

This is probably the second rarest Chevelle SS after convertible version. A lot of Chevelle SS using Muncie M22 with 4.1 final ratio as standard transmission and 3.90 ratio as optional. However you can order order one Muncie M20 3.31 final under COPO just like Monte Carlo. It's the rarest one because not many people order it. Some of them also fitted with aluminum head which will reduce weight a lot. This data i got from my father book. It contain factory specs of this car even performance data.

Migrating to new server! Do not add any data until I remove this message ...

It's a fake FPC. It still sounds like a muscle car on crack. ...

That I believe is only a rumour. I can could be ...

What "credit?". Both those cars had NOTHING to do with the ...

Is it a small margin?

So you're saying you bought a Mclaren F1, and you know ...

OH Ooooohhhss!! She got some spaghettiOs, witsum whip cream all over ...

And the MC20 should have much quicker estimates than the Roma. ...

Because there is no comparable data. One car has factual 1/4 time and the ...