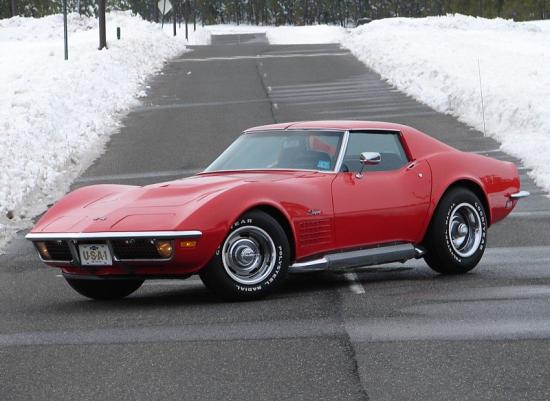 It might do a 10.6 dragstrip ¼mile time but the one thing it'll never do is chase a C7 ZR1 or C8 Z06 from traffic light to traffic light, let alone beat them on the dragstrip.

That said, I never thought ANY American manufacturer would make a 710hp naturally aspirated V8 street legal even in this day and age. The C8 Z06 versus this should go head to head on the strip.

If the SS454 LS6 range of cars were muscle cars, then the ZL1 and LT2 were muscle 'vettes.

How on earth was this the first 700hp American car and not the Hellcat, which we all have been told earned that (official) title for YEARS now?!

If this is the guy out of MN its legit, super-bike territory!

Anyone, ignore the troll who said this car is fake! It's not fake and it's not even a one off car. This is special production created by Chevy.

@ Super8: 10.5 seconds, that's pretty quick, after driving this car down a 1/4 mile drag strip, it would probably take 10.5 hours for my face to return to normal.

@ Shaggy: Yeah that's unheard because Chevy not publish it to public. But after Gib Hufstater interview in 1999, he unveiled the car performance. One of them is 200 mph top speed but i forgot when and where that car was tested. In the other side, Motor Trend on 1969 also test this one and estimated the car top speed is over 190 mph. This car was also mentioned on Classic Corvette the first 30 years complete with car performance when chevy test it. Zora Duntov himself claim that the car can do 10.5 sec for 1/4 mile.

Waiting the top speed to approve. It's 200 mph according to Chevy. This is the first Corvette that can reach 200 mph. The second is C6 ZR1

@ Super8: I know you can't wait, last time I had a broken bone, I was still too young to drive, I broke my left leg when I was 6 and my left arm when I was 14, the broken arm was my fault, I was just being a typical teenage white boy, stupid, I slid down a slide on my stocking feet, tripped, and landed on my arm, my forearm was bent like an unfolded paper clip, hurt like hell, I was in a cast for 10 weeks. I know you miss driving you car. Take it easy, dude, I hope you get better soon.

@ Shaggy: Not yet. At least i need about 6 week to make sure my bones is ready to use for walk. So i still can drive my Galaxie.

@ Super8: How's your leg coming along? Can you drive your Galaxy yet?

@ Super8: I'll bet it's satisfying to leave all those Civics and Integras in the dust, too. I have a friend who has a slightly modified 1994 Honda Civic with a custom paint job, rear wing spoiler, body kit, and cat back exhaust. She's not a serious car nut like me, though, she likes cars, and at least knows her Civic has a 4 cylinder engine. My coworkers say that my truck is fast, I was giving a couple a ride home from work, Tuesday, the way I pass makes them think my Dakota has a V8, it's just a V6 that acts like one, I don't waste any time overtaking when I'm on a 2 lane, I see power and acceleration as a safety feature.

@ Shaggy: I believe some cars like Shelby Cobra can reach 180 mph + if using modern part. Last time i drive on 1 mile strip, i reach 164 mph using my Galaxie. My brother Impala can also reach 158 mph and reach 13.1 sec for 1/4 mile. It's really fun to smoke the other kids who drive modern tuner cars with dinosaurs car. Some kids on my school call me "Female Cobra" since i using big block Ford but fitted with power steering and hydraulic clutch even i'm a boy.

@ Super 8: I imagine it didn't take long for them to repair her motorcycle, being such a small vehicle. My dad had a motorcycle once, a cruiser style Honda with a V-Twin, I was little when he had it, he mostly rode it to the Naval base in Jacksonville NC, he was in the U.S. Navy. He sold the bike when I was 6 or 7. I think he mainly got the bike so my Mom wouldn't have to pick hip up every day, saved some wear and tear on the family car, a 1987 Dodge Aries coupe, lol, my parents had some lame cars when I was growing up. When my parents first met, My Dad had a 1971 Dodge Charger with a 383 and automatic transmission. My mom had a Dodge Colt.

@ Super8: An LS-6 Chevelle, awesome car, I think Chevrolet should have kept the Chevelle and ditched the Monte Carlo, a stock Chevelle LS-6 with the close ratio Rockcrusher 4 speed will do 131 MPH flat out, the aftermarket transmission your dad put in it must be a long ratio, 170 MPH doesn't surprise me, with the right transmission, it'll do it, it has the power, 450 horsepower is nothing to sneeze at.

@ Shaggy: The craziest engine i ever seen in my life is the LS6 454. My father had 1970 Chevelle SS LS6 and he kept it until now. He bought it before he marry my mom. Most of the engine part is using modern part. And the result is insane. At the first try he can reach 11.20 sec for 1/4 mile using standard M22 Rock Crusher 4.11 final. Because the fuel consumption gone crazy, he change it into M20 with 3.36 final. When my brother drive it, he can reach almost 170 mph with digital speedometer. But that power makes my father must change the brakes into more powerful brembo brakes because it cannot stop. He also change the tires and LSD into more powerful one to make sure the traction is not break.

@ Shaggy: Her bike is already repaired even it was greatly damaged. Now i can live peacefully in Osaka again and i swear i'll never back to that country again unless i have bussiness to attend.

@ Anon: It's actually semi gross. But according to car performance, it might be have close to 600 hp.

@ Super8: I'm glad your leg is healing and you won the case, I'm sure health care in Indonesia is a far cry from that in more developed countries like the U.S.,U.K., and Canada, hope you get well enough to drive soon, I know you miss being behind the wheel of your Galaxie, by the way, did your friend get her motorcycle fixed?

@ Super8: I love mopars, I expected modern parts to provide better performance, Top end, the mid-size Mopar muscle cars like Dodge Charger, Plymouth Roadrunner, and Plymouth GTX are faster top end, but the smaller one like Dodge Challenger and Plymouth Cuda are quicker, so quick, in fact, when it comes to acceleration, nothing from that era short of a big block Corvette or 427 Shelby Cobra can touch a Hemi Challenger or Hemi Cuda, but top speed with close ratio transmission is 132 MPH VS 142-145 MPH in a Charger, Roadrunner, or GTX. Strangely I was once a huge GM fan, until my Pontiac literally went up in smoke and flames, I became a Mopar man after test driving my Dodge Dakota.

Since we are talking about 1969 isn't that power output in GROSS terms?

@ Shaggy: I heard you are mopar man eh? I got something great for you. There a lot of old Dodge that using modern part just like my Galaxie. And the result is great! Charger and Roadrunner 426 Hemi can reach 12 sec for 1/4 mile with close ratio and 160 mph + with wide ratio. Challenger and Hemi Cuda can reach less max speed but it has faster acceleration.

@ Mental: I guarantee the traction will break until you reach 4 gear if equipped with 4.11 final.
@ Shaggy: My legs are doing fine but i still can drive my Galaxie since the clutch is still to heavy for my leg. I win at the court and i pay none for hospital. And you wouldn't believe it, public health relation in here was soo bad. You will be find it difficult to pay even you have a money. And the medicine is very expensive in here.

@ Super8: By the way, how's your leg doing? Has your case made it to court?

@ Super8: 710 horsepower?! Holy Crap!, this car is hell on wheels! They picked a good engine for this Corvette, the 454's huge displacement gives it great potential, it's a shame this is only a 1-off car.

Damn, it's more powerful than the modern ZR1. And weighs approx the same... This was a Mad car and I believe the desire, though the driver would rather crap his pants, LOL.

But this car is created to be only a leader at the drag strip. And at the track, I don't think it would set the best times.

According to a statement by Gib Hufstater (a Chevrolet developmental engineer) in a 1999 interview, "Tom (Langdon) built the engine, I built the car. He got about 710 horsepower out of it." The car redline is about 7500 rpm thanks to perfect modification.

It would also be lowered by about 0.5 inches.