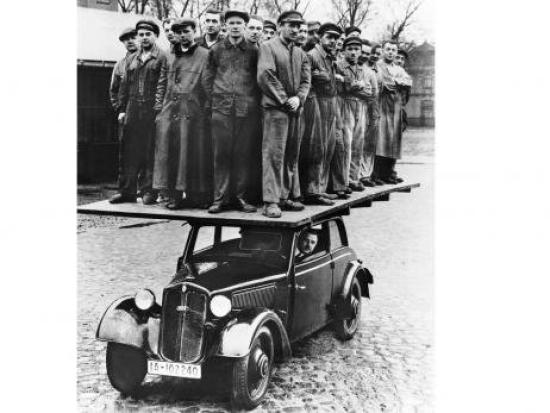 @ Fangio Man: LOL, it looks like driver is sticking his head out the window as if to ask a question, I would normally think directions, but in this case. "Has anyone seen ze ignition key?"

@Shaggy
So much suspiciousness under those guys...

@Fangio Man & CoolShirtGuy: I just sat here yesterday imagining what would happen it the car started moving, the platform would slide off the roof and the men would fall off, landing on top of each other, a 20 man pile-up. Those guys must really trust the driver, or someone else has the ignition key.

@CoolShirtGuy
There are obviously more than 20 men. ;)
But you are right, the car would not move.

@Shaggy
I doubt the car would even move if the driver stepped on the accelerator. In the picture, there are 20 men that you can actually see. Let's say each of them weighed 160lbs; even with just those 20 guys, that would still be 3200lbs pressing down on the car, more than double its own weight.

With next to nothing for torque, this thing would be lucky to move two inches with that kind of weight on it and no momentum to build on. Would still be funny to watch, though. Even the slightest jostle probably would've had everyone jumping off.

It would have been funny if the driver took off at full throttle. :D

I think it should be a demonstration to show how safe the car is or something...

LOL?... What the..? What's with the picture?... Why would they do that?... LOL, well, the roof is strong. Very strong, that's a lot of weight! Doesn't that guy inside the car worry that the roof might sag?