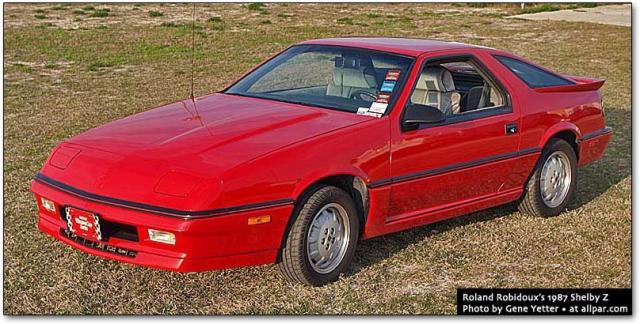 I had an red 89. The car was pretty quick given it was the 80's. While it would be slow by today's standards a few "tweeks" could easily fix that!

First, these cars are FWD, not RWD. Second, all the people commenting about how fast the Shelby Daytona was has clearly never driven a decently quick street car. They are embarrassingly slow. EMBARRASSINGLY SLOW!

I saw one of those black Shelby Z at the local Dodge place one night the next day I was there early to see if I could test drive it, the salesman said sure he took it and put gas in it brought it around a told me to get in, I sat Down look around and ask what that gauge was he said the one got the turbo I said what it a turbo he said so we left he kept telling me to get on it to fell the power when I saw a long straight road I put it back to 3rd gear and turned it loose red lined every gear when I went to 5 th gear the speedometer was on 115 he never said another word till we pulled back in the dealership,I bought it the next day had so much fun it that car till I hit a deer at a 100 mph one night.

I had 2 Shelby Daytonas. 87 and 89. They were 2 of the quickest cars I've owned. The 87 sold itself on the test drive when it toasted a Trans Am with ease. At the next stoplight, the guy wouldn't even look at me. Over the next 3 years I embarrassed more cars than I can remember. One car mag said nothing good about it in their review. Low tech, 2 valve motor compaired to the competitions 4 valve blah blah........
Last paragraph they said it was the fastest car on they had on the track in a long time.
I put 250k on the 87 and 375k on the 89. Minor repairs as expected

Well, I'm a mopar guy so I should hate on this car. But I can't becquse it's very beautyfull! The only thing they had to do was to make it rwd or awd and put a 4.0-5.7 ci V8 in the shelby version

This car has decent power and performance, it's not to be laughed at.

The car is a 1980s next gen Charger that uses Shelby's mods from the GLH and GLHS.
Its an American engine with stronger engine hardware than GLH/S and a detuned turbo setup to prevent warranty issues from the potential power.
I have one with the and it can outrun and of the cars listed here as "rivals".
Only a V8 with forced induction can beat it.

These cars were modified by Carol Shelby and built by Dodge. If you'll do your research you will find that this little 4 banger was putting out almost the same hp as a similar year model Mustang or Camaro.

I believe this car is FWD isn't it?

@ Super8: To be honest, I like this car, I would make a great car for commuting to work.

It has a Mitsubishi engine.

Ugh.. this car doesn't deserve to be called neither "Shelby", nor "Daytona".

It's just too plain simple. I'd suppose it to be a Mazda if didn't know.

Called Daytona but doesn't has a big rear wing.

you didn't the special f40 lm you ass

This is spacetime bending fast.

you probably haven't heard what the staff at lambo factory say about vw executives ...

Doesn't have the widest tyres.

This comments section will always be full of people claiming "actually ...

Oh come now it stills looks and sounds like a magnificent ...

The other aspect is that the ventilators will not save many ...

Surprised its not higher