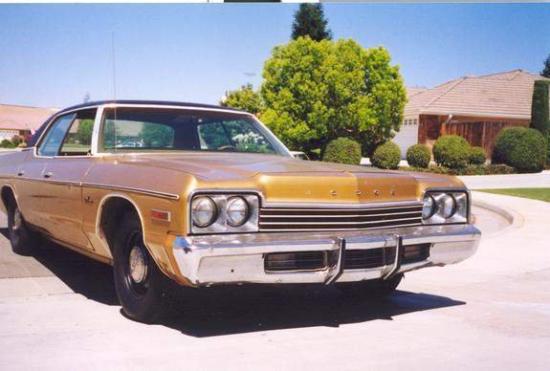 If went to college, parents would buy me a car. Chose "74" ex-C.H.P. Monaco! Just like "Blue's br's"! for$750.00 Dad asked me"you sure? You can get something else? For more $$$" Nope! Part of it was B/W paint job, part was the 440H.P. sticker on the dual snorkel air cleaner,part was it's lines, cuz I sketched it all the time. Went to SanFranciscoCityCollege fall 1978, their was this guy who had a "75" ex-C.H.P. Monaco! who also attended. We mean mugged each other for some weeks, chirpped tire's an such. Then came 1day, We're both waiting at the red, to get on So.bound 280 at Geneva, it was on like Donkey Kong! Let me put it this way, aknow the needle on my "Certified Speedometer" went way past the 140mph it went to! The freeway parted like the red sea. 2 B/W, Dodge Monaco's, 1000cfm Thermoquaded 440H.P. thumpin, barrellin yer way! Who won? It was Neck to neck, determined by , who would brake last. an that oppertunity came at N.B. 101 overpass, traffic stopped. Well adidnt lift off the gas till he did, which I had twist ground the gas pedal into the firewall. Man,then it was both feet on the brake pedal, pullin on the steering wheel, Whewww! Stopped in time with tail squirmin all over the road. After that, I was so pumped full of adrenaline. It was hard to talk to him, now a friend. I was taking Welding/Machine shop on campus, an Aviation at the ext. Hanger at S.F. airport. Miles per gallon? bout 4/5 cud'nt keep up w/gas bill. Soon traded the Monaco for a 69 Charger! That's one of my Monaco stories.

All old big power cars would spin more than a new car of today because they 1. had skiny tires 2. tracks were not as sticky as today 3.most tests were done on side streets,parking lots or dusty tracks.Hell some even in the rain..

I had a 68 Chrysler 300 2 door hardtop 440 tnt and it blew the doors off of a 1987 Buick Gran National Turbo car back then,I left my Brother in the weeds all the time from a roll,start (he always hooked better than me,but I know how to drive) He took his car in to 5 different dealers to check it out,but they said it was fine..he even tested several other new ones..Huh,he was always ticked off...I raced him against my 400 4bbl fury,and he beat me by 2 car lengths.He was still ticked as I wasn't far enough back,like the 5.0 Mustangs were of the day..

Times were off for recording 0-60,1/4 mile as the cars spun..more thannew performance cars...thus slowing times down..

And high performance version of the 440 or not..Yes you could get both versions,even in 74 even up into 78..

My Mom's first car she bought was a 1974 Dodge Monaco sedan. She got into an accident, a younger woman in another car hit her and totaled the Monaco she didn't like the car, she says that it was too big and too thirsty. I think it's a cool car, myself.

Here's something cool to do, find one of these in a junkyard, restore it, stuff a Mopar 540 Crate Hemi under its hood, mate that to a Hurst transmission, and put the car on 20" 9 spoke wheels. Yeah dude! ;)

Automobile-Catalog.com has the horsepower at 230 and the top speed at 123MPH. This is like the coolest of all hoopties.

The REAL Bluesmobile was a Cadillac.
Elwood traded the Bluesmobile for a microphone....then he later bought the Dodge

This is the real "bluesmobile" 440 Magnum V8. When they driving this car in The Blues Brother the car reach it's Top Speed @ 125 mph