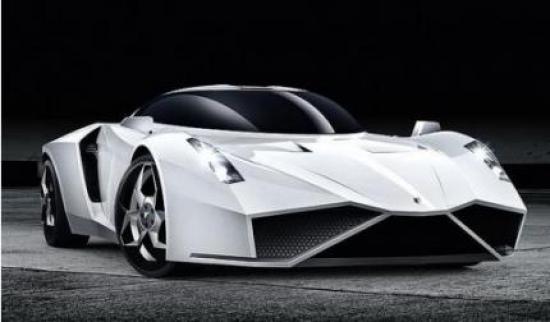 Did it come to production or remained a concept?

Is it really in production or is it still a concept?

Its one of my top 10 cars on the world,but,why they called it eWolf

rimac is about to show their e-supercar, 1088hp watch out for that one.

The e-1 by car manufacturer e-WOLF GmbH is a first: an ultralight carbon/aluminium-construction chassis with innovative flat cell technology, formula racing technology and approval for on-road use. Thanks to its innovation and technology, the e-1 achieves performance values that have been impossible in its class until now: 0-100 km/h in under 5 seconds. For safety reasons, its top speed is limited to 250 km/h. e-WOLF differentiates itself in the market by virtue of its consistent use of lightweight construction elements in addition to its 100% electrical drive system. All of the technologies, components and assemblies it uses are "Made in Germany".

A Li-Tec battery with CERIO® flat cells is the key component. It features a higher temperature tolerance and improved safety relative to other technologies. This innovation was nominated for the 2007 German Future Prize, a great honour. Its special low-volume composite anodes can store significantly more energy than most other products now in the market. Each flat cell (the battery has a total of 84) weighs just 1 kg and measures 23 x 18 cm. That means it is only a bit larger than an exercise book. Another important aspect of the Li-Tec battery with CERIO® flat cells is its cycle stability and unrivalled service life (10 years) and range (over 300 km). That makes Li-Tec the spearhead of current flat cell development.

To demonstrate the technology, an open-wheeled version of the e-WOLF electric sports car will be exhibited at the IAA 2009. e-WOLF has planned its sales launch (customised limited edition) for the beginning of 2010. "Our aim is to offer a 2-seater extreme sports car in 2011: the e-WOLF e-2," said Kai Schönenberg, Marketing Manager at e-WOLF GmbH. "It will achieve dynamic vehicle performance that is sure to be very impressive." This innovative 4-wheel drive vehicle will be powered by 4 high-performance electric motors with direct coupling. "Here at e-WOLF, we can certainly envisage our e-2 participating in a 24-hour race in the next few years," said Schönenberg. e-WOLF is being marketed worldwide, with promotions concentrating initially on the Near East and Japan. e-WOLF is in a different league - it does not compete with the big sports car manufacturers. e-WOLF targets a market segment that has been neglected until now: extreme sports cars for a particularly elite clientele. To put it plainly: it is an electric sports car with a capacity for acceleration that puts it on the edge of technical feasibility.

Newly established e-WOLF GmbH is part of the Maiworm Group. The company has accepted the challenge of developing and manufacturing extreme performance electric sports cars. The e-WOLF company concept does not provide for accumulating know-how on the technological development of electric vehicles. Instead, e-WOLF negotiates strategic alliances and project partnerships that allow it to consciously draw upon the expertise of institutes and companies working in this area. In turn, e-WOLF enjoys the significant advantage of always being able to incorporate the cutting edge of research in the design of its vehicles. Dr. Werner Hufenbach, Director of the Institute of Lightweight Structures and Polymer Technology (ILK) at TU Dresden, confirmed that cooperation between the institute and e-WOLF will continue to be a major focal point in the future. "We are certainly going with the trend in this respect, and I am also personally convinced that electromobility will change the world. We have a major opportunity here that we plan to make the most of," he said. The Institute of Lightweight Structures and Polymer Technology (ILK) of the TU Dresden, the Saxon Centre for Lightweight Construction (LZS) and Li-Tec Battery GmbH are some of the most important e-WOLF partners.

e-WOLF technology in the FUMO ion 1 by Multicar

By supplying innovative powertrain components (motor, battery and control systems), e-WOLF GmbH is participating in the development of the FUMO ion 1 transporter by Multicar. Powered by electricity, Multicar is ideal for municipal administrations and garden and landscape contractors working in inner cities, recreation centres or spa towns. A prototype of the FUMO ion 1 electric transporter will be on show at eCarTec 2009 in October. Field trials will be conducted as the next step

I found some info but can't confirm how accurate it is.....

The German company EWolf has announced their second electric sportscar model, the e2, which is set to rival any Ferrari or Lamborghini. The EWolf e2 is four-wheel-drive and is powered by four electric motors, one for each wheel. In total, the EWolf e2 develops more than 400kW and 1000 Nm of torque. Although the manufacturer has not released any official performance figures, we should expect some impressive numbers, since the car weighs less than 900 kg.

For safety, the EWolf e2 is equipped with a crashbox, formula racing technology, and an optional sound module since the electric motors make virtually no noise at all.

A complete re-charge of the EWolf e2 takes, according to the manufacturer, less than 30 minutes and the car has a range of more than 300 km.

The EWolf e2 is expected to go into production sometime in 2011.

Well thats what SuperCars are all about, there wouldnt be SuperCars if we didnt have the Immaginations of a lil kid:)

then u gots some cleaning up to do lol

No future or concept cars allowed.

Thank you for this video TypeF173. Steve Sutcliffe is a good driver. Best regards ...

Nice colour. But we have one of these in Dublin, and it looks horrid. ...