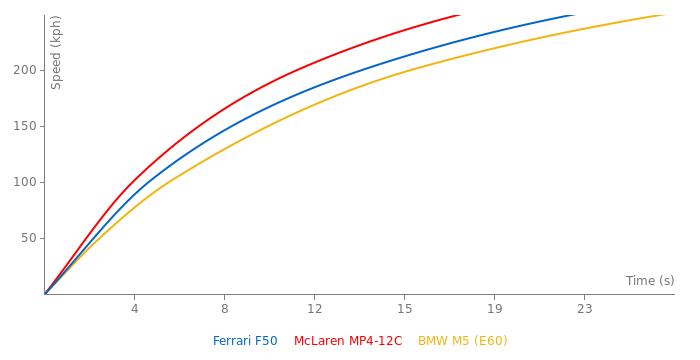 Ah yes, Ferrari's road legal F1 carThey gave it inboard suspension (like an F1 car) they removed all the rubber bits from the suspension, and gave it an F1 type damping system that was semi-adjustable and computer controlled, like an F1 car. The engine has five valves per cylinder (I don't know why that didn't catch on in performance cars) and is of small displacement, only taking up 4.7 liters and based on the engine from the 641 F1 car. It has aerodynamics like an F1 car, with a fan up front replacing a huge splitter and a massive wing in the rear. The engine is part of the chassis, which itself is a carbon tub from the 641 F1 car, and all of it's body components are of carbon fiber. Although she doesn't have a paddle-shift, the manual is just like the one used in earlier F1 cars, and the brakes, while not being carbon ceramic, are still race grade. And finally, the performance. Although top speed was somewhat slow, around 203 (the highest Car & Driver got was 194 MPH), 0-60 was acomplished very fast in 3.7 seconds and the 1/4 in 10.7 according to Motor Trend.

I know it's technically not a quarter mile (402m) but still.

Change the main photo to the following: I think BM clocks faster performance because unlike other magazines,they use pro drivers.Infact thats the only magazine which I completely trust for lap times.I think that's why F50 is slower than F40 in most tests.Regarding tsukuba time both F1 and F50 are slower because of damp weather,F40 did 1;06.45 in similar conditions.

Yea, I question ALL of BestMotoring acceleration times, They are SOOOO much faster then Anybody else, Off by huge margins, And i dont see any superior launches or shifts then anybody else, Hell these are the same people that tested the GTR and it was faster in the Mile then an LP640..

Not that, I ment the fact that you said tere were no HyperCars in the 90s.

Now i know that term is subjective, And stupid if you ask me, But given "What" peopel call "HyperCars" today, They certainly well did exist in the 90s, Way beyond the level of the F50.

@BR2 i say the F50 and F1 etc are hypercars but i dunno if others consider it. don't care any but the F50 is a legend for sure.

My mistake yes back in 90's no hypercars, i was considering it in modern terms, and YES the king remains to be the mighty McLaren F1 probably the finest car ever made. Even in terms of Ferrari the F40 out performs on straight lines. its not a ground breaker, but a better feel, especially above 4000 RPM.

I agree somewhat, That the front end could be better, I always did think it was a little "Weird" for the time, But i certainly wouldnt call it ugly, I think it looks bloody fantastic, Specially from the rear, IMO the F1 doesnt hold a candle to this in the looks or sound department. If anything the F1 is WAY to plain for what it is, And spending THAT much on it doesnt really justify it for me. Now if were talking about 90s cars in the looks department, The R390, And 962LeMans are 2 of my all time favorite looking SuperCars from that era, And would take them vastly almost over any car from any period. But i certainly understand why someone could call the F50 not the best looker, But i certainly wouldnt.

Beauty is in the eyes of beholder. I think its a handsome car from every angle. I can see how someone may not have taste for the front end / headlights of the F50. But you, CoolShiftGuy must spend more time looking at it. After a while you will start to like it lol

Its the "le'ts get rid of popup headlights" era for supercars. Jaguar XJ220 has similar headlights and indicators.

No wayyy, the F50 is a great looking car! And it's my favorite Ferrari, ever.

Yep. Sorry, but I think it has the ugliest front end ever put onto a Supercar. The F40 looked like it was trying to appear happy, but was actually depressed and not hiding it very well. But the F50...It reminds me of a dumb face someone would make for a selfie.

I mean, look at the McLaren F1, then look at this thing.

He disrespected my favorite car lol

Not to mention it was ugly as sin and EVERYONE knew it. I mean, look at that bottom picture; when even a black paint job can't make your car look remotely cool, there's a problem.

This is not a car you would've found on a poster on some kid's wall back in the 90's.

"Hypercars" never existed back then. And in the presence of the Mclaren F1, it could never be called "hyper"

Underrated hypercar, Never forget that V12 is a upgraded module from the Ferrari 641 driven by Alain Prost, last of its kind, this is probably the rarest F series hypercars produced from ferrari besides the Mighty 288 GTO. A Organic Hypercar. 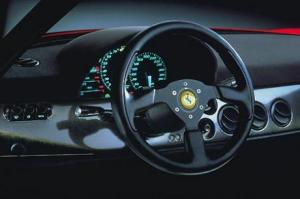 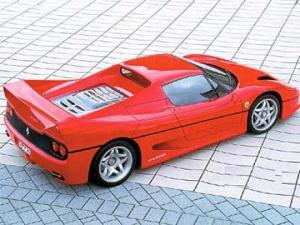 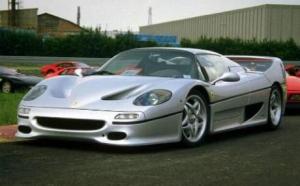