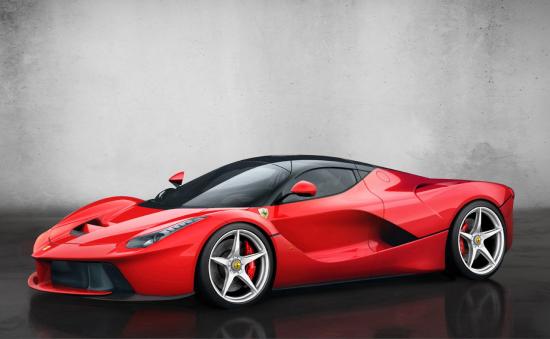 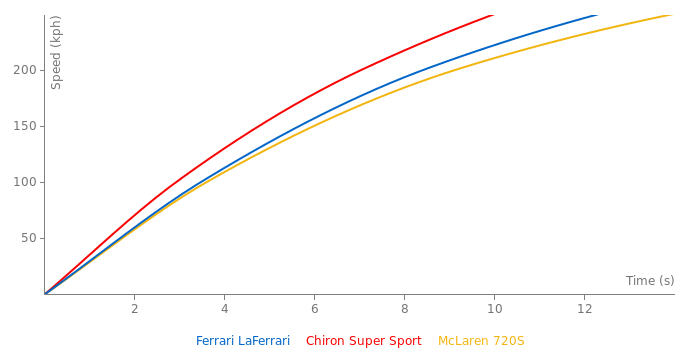 Leaving this for the Ferrari or more correctly LaFerrari fans! 1/4 mile PLUS 1/2 mile verifed data X2! I'll pull it out tomorrow when I've a chance, and God knows what's going on with the pink and silver Bugatti Chiron, it got smashed! LOL! Half way through it mind it might make a comeback!

"Since it's an LMH type, Ferrari was able to develop its own chassis for the 499P, as opposed to the LMDh types in the same class whose chassis must come from either Dallara, Multimatic, Ligier, or Oreca. The 499P meets the class's balance of performance standards by topping out at a combined 670 horsepower, and though LMH type rules do not mandate a hybrid system like those for LMDh, it does have one. And unlike LMDh cars, the 499P is allowed to be FOUR-WHEEL drive, with an Xtrac seven-speed sequential transmission sending power from the gas engine to the rear wheels while a differential splits torque from the single ratio electric motor up front.

The 499P derives its name in the Ferrari racing tradition, referencing the displacement of its 2992-cc twin-turbocharged V-6, which shares the architecture of that found in the 296GT3 but has been reworked not only to reduce weight but to fulfill its unique role as a load-bearing piece of the 499P's structure. The electric motor at the front axle is powered by a 900-volt battery pack, charged by Ferrari's Energy Recovery System (ERS), which recharges during deceleration and braking and requires no external power source.'

Quite an incredible machine.🙂 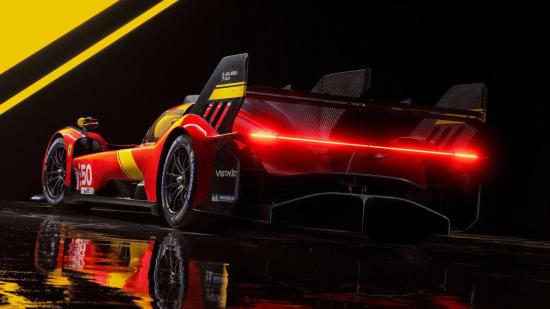 A year since Ferrari announced its commitment to the program, it’s finally revealed the new 499P Le Mans Hypercar racer in full.

After months of teasers and strenuous rounds of initial testing, Ferrari has given us our first look at its new Le Mans Hypercar contender, the 499P. Launched as the marque’s first top-flight endurance racer since 1973, it will go head-to-head with the likes of Toyota Gazoo Racing, Scuderia Cameron Glickenhaus and Peugeot when it makes its race debut at the 1000 Miles of Sebring in 2023.

The LMh-class 499P is built upon a completely bespoke carbonfibre monocoque, with its hybrid powertrain also unique. Powering the front axle is a single electric motor capable of delivering a peak of 268bhp, drawing power from a 900V battery pack developed using technology derived from its hybrid Formula 1 cars.

Ferrari revealed that it considered the use of V12 and V8 power plants at the project’s inception, but the need to keep weight as low as possible, it settled on a bespoke 120-degree 3-litre twin-turbocharged V6 (499 being the displacement of each cylinder). As per the regulations it produces a maximum of 671bhp, and although it shares architecture with the V6 from the 296 GT3, it doesn’t share any specific parts.

Both the combustion engine and electric motor produce the maximum output allowed under LMh regulations, but to ensure LMh and LMDh cars are competitive with one another, those peak outputs are constantly adjusted to ensure the 499P’s combined output doesn’t exceed 671bhp (500KW)." 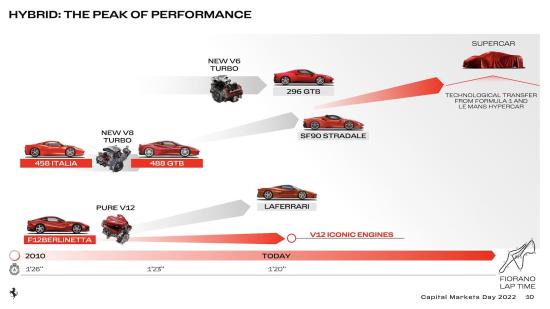 CARSCOOPS
Ferrari Will Unveil LaFerrari Successor In 2024, Per Allegedly Leaked Document
BY SEBASTIEN BELL October 24, 2022
Ferrari may build a total of 828 units of its, as-yet unnamed, upcoming supercar if a recent table posted to the Auto Pareri forum and shared with us by Mahmud Maha is to be believed. The car, apparently codenamed the F250, is set to be unveiled in October 2024, according to the document.
It shows that the standard car will be unveiled on that date, and that Ferrari will build just 599 of them. The Italian supercar maker has long based its production figures on how many units it believes it can sell minus one, in order to maintain its exclusivity and cache.
Per the document, a track-only XX version of the car will be unveiled in July 2026. Production of that model will be substantially more limited, and the automaker will build just 30. Launched in 2005, the XX program gives Ferrari’s best clients access to track days where they can drive the purist version of its latest supercars at special events all over the world.
Finally, the spider (or convertible) version of the car will be unveiled a year later, in October 2027. Ferrari will make 199 of those, to bring the total across all models up to 828 examples of the supercar.

The purported document further lays out the testing schedule for the F250 and claims that the test program for the test mule (mulotipi) started in July of this year. We saw a Ferrari hypercar testing before then, but that may have been the Le Mans racer, not this road car.
The paper adds that the prototype will start testing in February, while pre-production models are set to start arriving in January and March 2024. Although it’s hard to be sure if this is a real internal document or not, we do know that Ferrari is working on a future supercar.
According to a presentation about its future business plan, the automaker is planning a range-topping supercar that will have technology transferred from Formula 1 and its Le Mans Hypercar program.

Indeed, the head of Ferrari’s LMH program recently told Autocar that its new racecar is “a good laboratory” and that his “staff has ideas that we can put on the car that will be good for the future [road cars].”
That and the business plan would suggest that the upcoming supercar will be powered by a hybrid powertrain. Unfortunately, we may have to wait until October 2024 to find out for sure.

Quote>"It’s not every day that an all-new hypercar is announced – and even rarer that we see one of those creations actually produced, but a startup from Rome, Italy, called Angelelli Automobili that was founded by Davide Angelelli back in 2015, is trying to keep its dream alive with something they’re calling the Superpeformante D-One."

Interesting so far so good!

Further>"Among them, the lowest claimed output is 1,000-hp (745 kW) thanks to a combination of a gasoline engine and electric motors. The company even THINKS that it can top out OVER 300 mph (482 kph)."

I stopped reading there!

This has me asking, is Marca a reliable source for car knowledge?

Link contains a HELL of alot of verified metrics!

Bugatti Veyron gets TRASHED by Laferrari in England!😂

Ferrari Gang! Sexy Metrics is BACK! But this time on the sexy LaFerrari's case! Well here goes~

Quote>"The 2015 Ferrari LaFerrari is one of the quickest production car ever created by Ferrari. In their initial Ferrari LaFerrari performance tests, Automobile Magazine was able to reach 1/4 mile in just 9.6 seconds at 157 mph."

Confirmed on the Zeperfs database albiet in km/h>

Automobile Magazine no longer exists, it was apparently bought out by the same group owners of Motortrend. I'll continue to look for scans etc to support this.

And that's really it, there's nothing else to state. The Holy Trinity keeps on surprising.

(And (some) of the guys at Ferrarichat believe it's completely legitimate.~ perhaps even actual owners?🤔)

Laferrari 0-100 and 0-200km/h from a Source I KNOW has been used on Fastestlaps. Motorsport Magazine!

And the Lamborghini Aventador got destroyed, but then there's a huge power disparity anyway so to be expected.

This will certainly be addressed! ;)

Now, I wonder if I've missed something for the Laferrari? Reference 0-180MPH? Well let's find out! I did say I wouldn't look at these hypercars again. But that's like having a fit supermodel girlfriend and not making out. NOT happening!

Out of the Holy Trinity, this is the only one that HAS a direct predecessor! The LaFerrari served as the Son of Enzo.

The Porsche 918 and McLaren P1 were relatively designed from the ground up. Not just that, but their purposes distinguish themselves completely from their supposed "fathers" the Carrera GT and F1 (yes, I said F1; the SLR is a grand tourer).

Quote>"That news, though UNCORROBORATED, contradicts some earlier reports that suggested Ferrari would add hybrid technology to its V12s but stick with naturally aspirated power. The source claims that while the cylinder count won’t drop, the V12’s cubic capacity will be reduced from its current 6.5-liters."

Quote>"If, as rumored, Ferrari drops a V12 into its upcoming Purosangue SUV, then that too would probably be a natural fit for a turbocharged V12 and its strong low-rev pull, while all-wheel drive would help control a power output that could theoretically top 1000 hp in its most extreme form."

Very interesting indeed. Ferrari apparently stated previously they would never produce an SUV. Now they are.

Looks like 1000hp, once a Bugatti stronghold albiet over a decade ago is becoming common place amongst more manufacturers.

Aston Martin have TWO projects at either near, or over that level. Mercedes Benz AMG have one too.

And I'm talking about manufacturers with LEGACY status, not a "hypercar" manufacturer traditionalists.

There will be HUNDREDS of these beasts. No THOUSANDS!

Like the Porsche 918. We saw one on the motorway coming out of Bournemouth to London on business. Stunningly beautiful car in the first morning light. It looked like a ****ing UFO in comparison to the mundane vehicles surrounding it. Never will forget it.

Dynamically balanced, as all things should be.

I tried putting Daytona SP3 as successor to LaFerrari on Wiki page and a biased mod reverted it saying "Unsourced."

One of the very reasons to NEVER TRUST WIKIPEDIA!!! Wikipedia has a SELF-SERVING AGENDA. 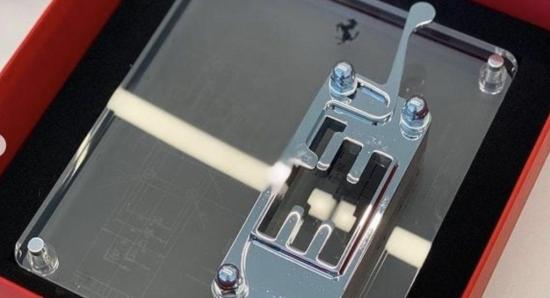 as per the rumors, this will be an icona based on laferrari with 812c engine and will be revealed on 11/2021 at finali mondiali ferrari challenge

forza ferrari, may the v12 engine live for another 1,000 years and turns all the corrupt politicians into stones for the pigeons to take a dump on them :) 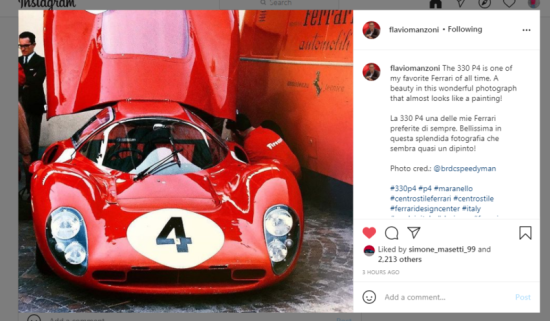 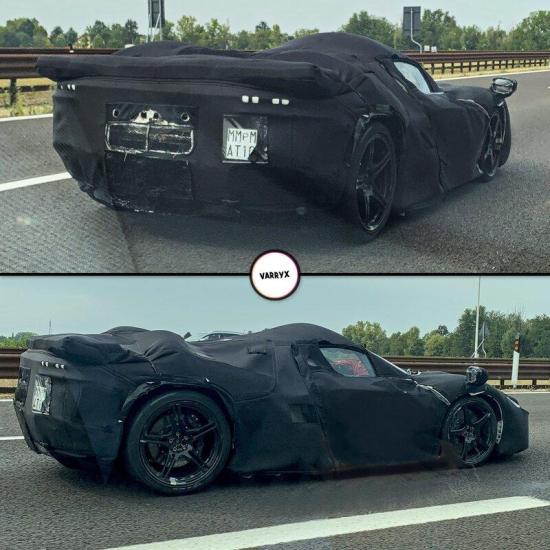 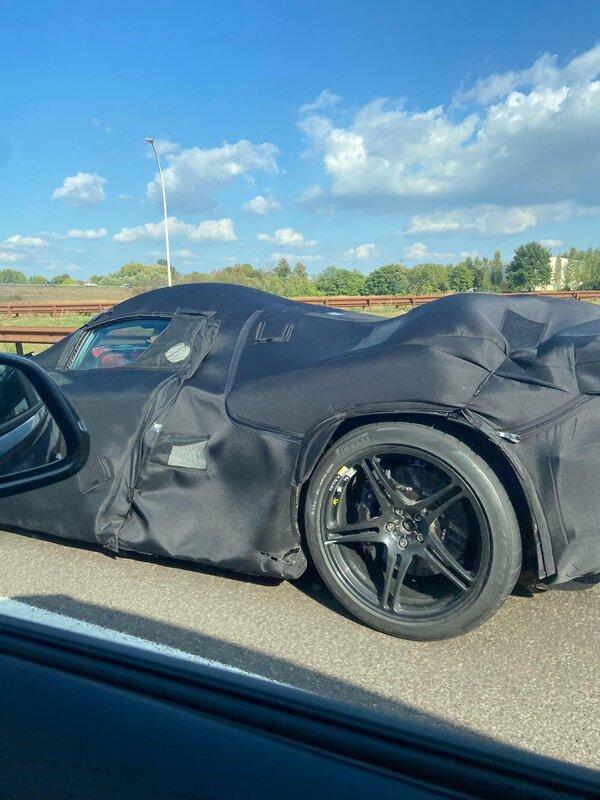 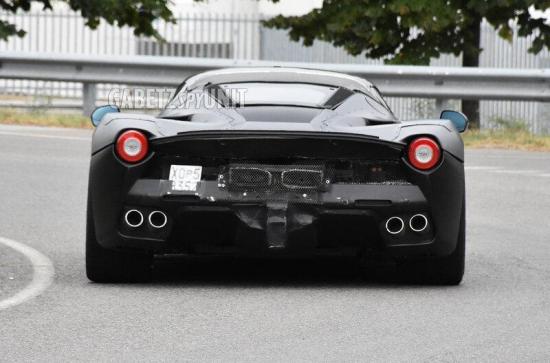 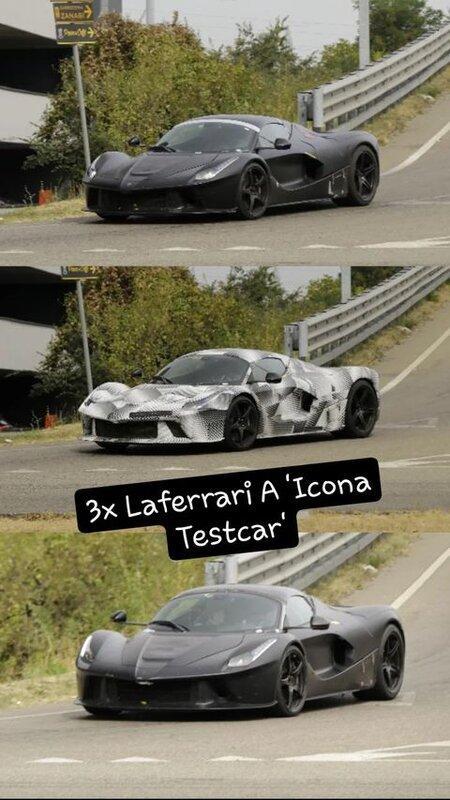 I've tried literally everything. The LAF 0-300km/h times is 17.XX region. And that's stitching together times.

0-300km/h claim unless something miraculous happens is unverified and unprovable at 15 seconds claimed. The SF90 is quicker and can only manage 16.4 seconds.

Now we know hybridity shuts off assistance at around 217MPH where does that leave stop speed? Well including factors>

251MPH maximum speed including frictional forces considered. Gearbox limited to 252MPH via final drive plus ratios. Coincidence? No at all.

400km/h plus+. Mclaren indicated the P1 always could.

This is the ONLY clean "hit" I can find. It's not Vbox obviously but still it's a digital timer.

Notes this run included the extra weight of the passenger. Also this cars acceleration I benchmarked against Road and Tracks instrument timings. At 150MPH (as far as they go) it was 0.5 seconds adrift. So the 0-186MPH or 0-300km/h time without passenger and better launch could see the LAF in the 16.5 second range perhaps a little lower. The car as yet isn't from the different investigations I've done, looking at hitting 15 seconds as Ferrari claim. Although they may have test data available. Maybe I could ask? I mean it's finished production anyway?

For me the more important figure is 0-200MPH.

Anyway as I've shown I try.

Quote>"When driving, the HY-KERS system disconnects only when the car reaches its full speed of about 217 mph. At this point, all 800 hp generated by the V-12 goes straight toward powering the wheels."

I'll jostle up a top speed calculation on internal combustion engine only. 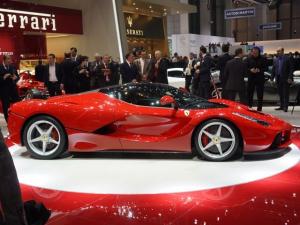 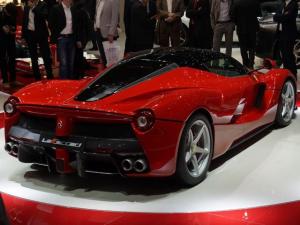 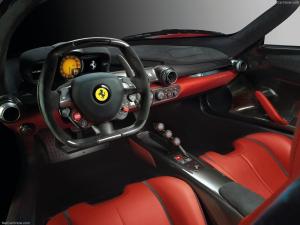 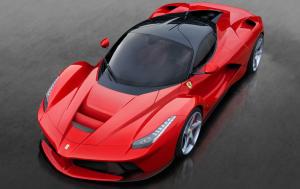 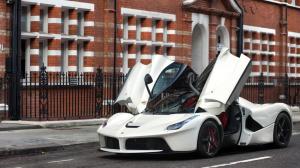 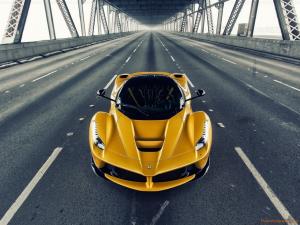 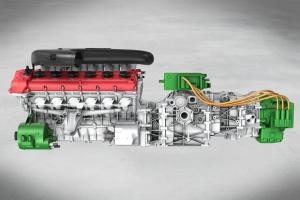 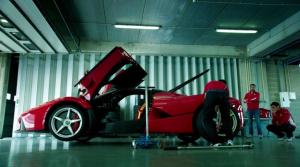 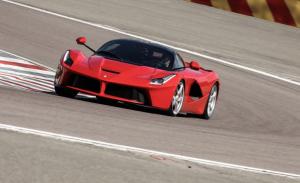 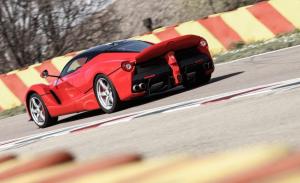