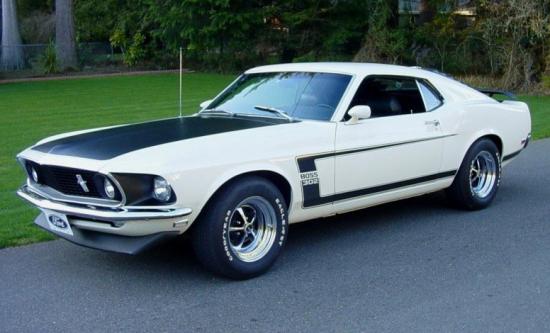 @ Super8: Yeah, 135 MPH sounds more accurate, 117 MPH, my mom's minivan can beat that, it has a factory claimed to speed of 120 MPH and can probably do 126 according to automobile-catalog.com.

That is one awesome looking Mustang!

I agree with you Viking quite right.
such a time , Ferraris,Corvettes,Jaguars,Porsches and the pony's.

Like a lot of kids in 1969, I followed all the road race series. Road racing had more coverage in U.S. media back then than either NASCAR or NHRA (although they were getting plenty of coverage as well). Motorsports interest was big at the time. Ferraris, Corvettes, Jaguars, Porsches, Mustangs, Camaros, (the whole pony car class in fact) were seen as successful road race cars. Few road race enthusiasts in the U.S. had ever heard of BMWs or Audis; or any Japanese cars back then.

A nice performance package for 1969. Noted to have excellent handling and braking for its time. It was after all a homologation special. These original Boss 302 models formed the base from which the factory built the cars used in the SCCA Trans-Am race series. SCCA had established a limit of 5 liters in Trans-Am, therefore Ford developed this 4.9 liter fast Mustang.

Not too shabby for a car that made under 290hp (pre-net ratings) and horrible tires.

He had a momentary conniption otherwise known as a sleepy Joe ...

Only possible scenario where F40 could be faster is just that - roll race ...

Stop this Ferrari F40 thing Both of these destroy F40