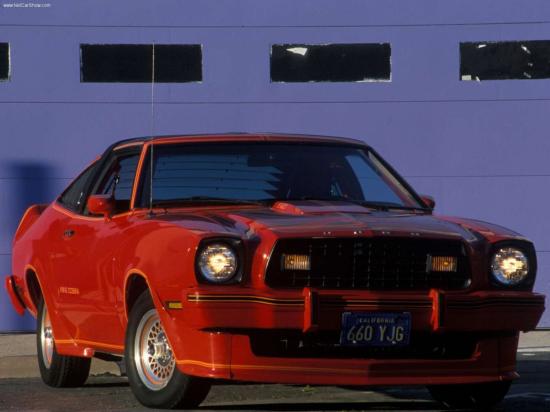 Ford Mustang II King Cobra vs Pontiac Can Am

Not to sound condescending, but there is much misinformation here. I was there and have wrenched on these cars a lot, I have also read probably everything written about them including their development.

Lee Iacocca who was the original mastermind behind the 64 Mustang knew the behemoth 73 was dead. He went to his design studio and asked that they develop 2 concepts for a Mustang replacement. A return to the original 1964 plan was the thought process. One of the design studies was based on the Maverick platform, and the other "based" upon a highly modified Pinto platform. Based upon size the Pinto based study won.

The Mustang II is not on a Pinto frame or chassis. The chassis is highly modified and larger than the Pinto. Fact is, the Mustang II shares only some bin parts with the Pinto and has much more Granada in it. The 1974 Mustang II was the most engineered car in Ford's history and is on the top 10 list of best selling Mustangs to this date.

The 1974 Mustang fastback takes its styling cue's more from the 73 Torino Sport Fastback than any Pinto. None of the body panels or glass from the Mustang II will fit on a Pinto.

Engines. The 302 released in the 1975 Mustang II had the same power as the 1965 Mustang 289 the only difference being that in 1972 most US cars manufacturers changed from "gross" horsepower/torque ratings to "net" ratings. It is fairly easy to reverse engineer a net horsepower rating of 139 to gross in order to find out it is actually a 200hp engine.

Road tests of the day show that the 1975 Mustang II with a 302 compared very favorably to its counterpart the 1865 Mustang with the 289 both in acceleration and road handling. As well, the 139hp rating does not align with the 250ft/lbs number.

All of this in a car that weighed under 3000lbs.

Tires: The standard tire for this Mustang was a bias ply BR78-13 or BR70-13 radials. It does not take rocket scientist to understand what 300ft/lbs of torque would do to these cartoonish tires when pressed, and to say the Mustang II was light in its rear would be an understatement.

Gearaing - All II's came with a modified C4 (size) and from what I have read could not house a rear end gear over 3.00:1

So what we had, was a perfect light weight car for which to turn into a hot rod, as we all did before the advent of the "factory" muscle car.

When looking at the de-tuning done by Ford, the undersized 2 barrel carb, the 13" tires, the limited gearing, it is a wonder they turned a 0-60 of 9 seconds. However, in the hands of those who knew how to hot rod, these things could be brought to life very easily with just a 4 barrel. They handled much better than the 71 thru 73 boats and were really the rage of the day.

I still like them but agree their lines have not aged as well as some of the others in their era like the Camaro and Firebird.

I hope I have cleared up some of the misconception about this little jewel that Mustang purists love to hate on.

Ford really didn't bring a good performance mustang back until 1983 the first true HO mustang with a Holley 4 barrel carburetor
and a factory aluminum intake manifold,
a lot of torque in a very light car, and with just a few mod's like Headers, bump up from a 600 cfm to a 650 cfm Holly , maybe a small cam and these cars would move pretty good. Mustangs were finally back.

132 mph? Sure, if you drop it off the Trollveggen or the North face of Ben Nevis.

My king cobra has 49 horse power under its belt, whew its slow

@Super8 yeah I can believe 110 mph, the two barrel carb 302 windsor engine has a very limited rev range. I find the Mustang II (1974-1978) to be a typically disappointing car from its low performance era. Performance started coming back into showrooms around 1985.

@ Super8: I wouldn't be surprised, this car disappoints me just looking at it.

BTW we should change that max speed since i'm not add that one. max speed is 110 mph from www.automobile-catalog.com

65-71 Mustang are the fastest first gen Mustang including Shelby Mustang. Luckily in second gen Mustang, some handful dealer offer a Racing BOSS 302 to this car (not under Ford optional). It rated at 345 Hp and 380 ft-lbs. Because the engine was not easy built, the price went up so highly. It fitted with wider tires and stiffer springs to keep the car in the right way. Here's the link: http://www.fastestlaps.com/models/ford-mustang-ii-king-cobra-special

Another bit of trivia: the Goldfinger Mustang convertible had the not yet available to the public 289 cu in V8. Ford also had plans to have a fastback model Mustang with gadgets used in the film, but this special gold painted Mustang was not finished until long after filming was completed.

@Viking
No, you didn't understand me correct. I meant that '64 Mustang (in basic I meant anyhow modified, or anyway the first) and its power output is greater than this "King's" '78.

Goldfinger.. mmmm.. yeah, a perfect movie! Great times were! Yeah, remember that pursuit scene between Bond's Aston and Mustang.. and a scene with Shirley Eaton.

@Bijan actually I do agree with you the '64 1/2 Mustang with the 289 V8 is an icon. I loved the movie Goldfinger wherein an Aston Martin DB-5 and a new Mustang were dueling on a curvy Swiss road. Great film and two great cars. I also agree that the "Pinto Based" Mustang II (1974-1978) was a lesser car than the original generation (1964-1973). The two barrel carb 302 cu in would have been fine as an entry level engine in 1978, the problem is that it was the highest performance engine available. In 1978 if you wanted real performance you had to go with a used car, preferably from the selection of muscle car big blocks or the hotter versions of sport compacts circa 1964-1974.

@ Viking : the 60' Mustang was a Legend , especially with Ho-Po 289/271 High-rev engine , Fantastic .
Same performance and size with much more expensive Aston Martin DB-5 .

Mustang couldn't survive the Muscle Car crisis. In comparison to the I Mustang this Cobra "King" is.. nothing. The power output makes the basic '64 MY Mustang just laugh, and its exterior.. could be much better.

The Mustang II is actually based on the Ford Pinto, so it's basically a Pinto dressing up as a Mustang for Halloween. LOL :D

There's no way in the world this car could 132 MPH with its stock engine, 139 horsepower isn't enough, my Grandma's 1991 Toyota Previa minivan had 138 horsepower. My 2008 Dodge Dakota pick up has a V6 and would blow this car's doors off. The King Cobra does look awesome though, it looks fast, but this car reminds me of the jerk we all meet every now and then who talks tough and tries to make people think he's hell on earth, but it turns out he fights like a panzy, that's what this car is like, or a kind of snake that live around my neck of the woods, the Hognose Snake, when threatened, it puffs up, hisses, and does mock strikes pretending to be a copperhead or a rattler, and if that doesn't work, it plays dead. Ford should have called this Mustang the Hognose.

@Bijan I agree. The top speed on this is more likely in the 118 mph range.

In gunsmith cats manga, it say the BOSS 302 had 345 Hp and 380 ft-lbs for high performance version. But it also say that engine with that power was made for racing and has been shown to put out 460 Hp without changin' the compression ratio. Here some prove http://manga.animea.net/gunsmith-cats-chapter-85-page-10.html
Is that real?

I realize that some car enthusiasts on this site have never seen a carburetor, so I should give a little info: two barrel carbs usually gave a bit better fuel economy, but had less high end horsepower than four barrel carbs. Peak torque on these two barrel 302 engines was at roughly 2000 rpm, peak horsepower was at around 4000 rpm. I learned to drive in a 1972 Mercury Comet GT with this engine, it accelerated well off the line, but didn't have much at higher speeds. Real world fuel economy was good, as far as I remember it was usually a couple miles to the gallon better than what my 2011 Mustang GT gets now.

I am actually glad that this Mustang was added. This allows us to remember how far we have come since the dark days. The two barrel 302 was introduced in 1968 with a "gross" horsepower rating of 220. In 1972 the compression ratio was reduced a little and it was rated at 210 horsepower (gross), but also rated 141 horsepower by the new (net) rating system. It stayed at roughly the same rating (around 140 hp) for most of the years it was available until 1982. Unfortunately for performance fans this was the top engine available since all the four barrel carb, high compression, and/or bigger displacement engines had all gone away.

I do have to admit though, these years of Mustangs did look pretty cool. There's a white one with blue stripes around here that's really slick.

Its close enough where other things about the car can be more important for ...

I very much thank you, Hamburger, for providing us with these acceleration figures of ...

Hello, Fastest Laps and Hoppelmoppel123. My mistake! I'm sorry about the confusion. It appears ...