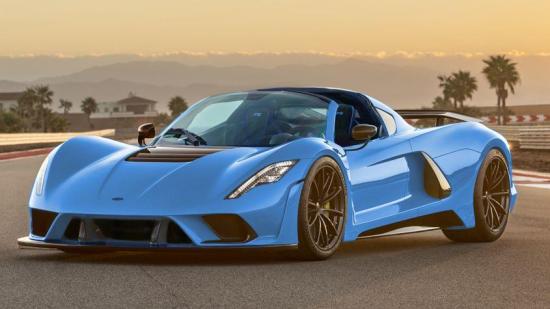 Named the Hennessey Venom F5 Roadster, it looks set to become the world’s fastest convertible. It was previewed in two images released by the Texas-based firm and will be fully revealed on 19 August at The Quail."

But!>"The company hopes the F5 Venom, be it in coupé or convertible form, will one day surpass 300mph.

Hennessey told Autocar that he wanted to complete any recorded run two ways in the safest conditions possible.

Speaking about the coupé, Hennessey told Autocar that he had “no desire go out and score anywhere near the theoretical top speed of 328mph”.

Then you don't to shut an entire highway down? Just use Kennedy Space Centre!🤔

Quote>"Hennessey on Tuesday announced the new Venom F5 Roadster and said the debut will take place on August 9. The car will then make a public appearance on Aug. 19 at The Quail, A Motorsports Gathering, one of the premier events of Monterey Car Week.

No further details have been announced apart from the car featuring the same 6.6-liter twin-turbocharged V-8 as its coupe sibling, meaning a peak output of 1,542 hp on pump gas and as much as 1,817 on E85. The mighty engine, nicknamed the Fury, is mated to a 7-speed automated manual transmission in the Venom F5 and spins the rear wheels only."

It was also recently confirmed that the Venom F5 Roadster will also be appearing at the exotics on broadway show along with 4 more F5 Coupes! I'll try my best to be there and get some pictures of the car.

Are you going? FIVE Coupes? That's a big slice of production!

Thanks for letting us know. I don't care too much about what people say, he's getting ON with it!

Ah my mistake, it's actually four coupes according to this instagram post by Exotics on Broadway. https://www.instagram.com/p/CgQVEoTp0_A/

I'll definitely try my best to go! If I do attend the event I'll post the pictures here.

That's still a good amount! Take an RS and race them! ;)

Look forwards to it. Ricky definitely will! LOL!

Technical specifications. Exactly the same as the Coupe. Dimensions to be added. Weight will not until verified.

I'm not a massive fan of the Veyron. It's more Chiron ...

So the BOSS of BUGATTI and an ex Formula One Champions ...