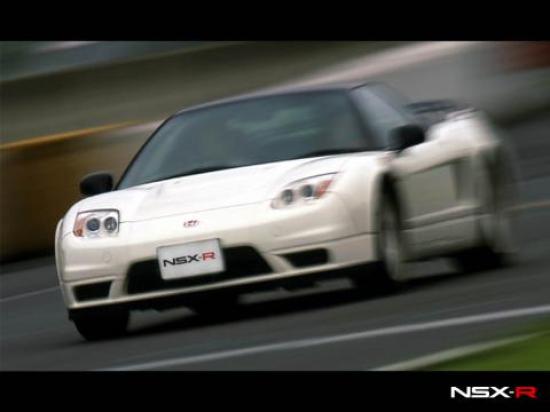 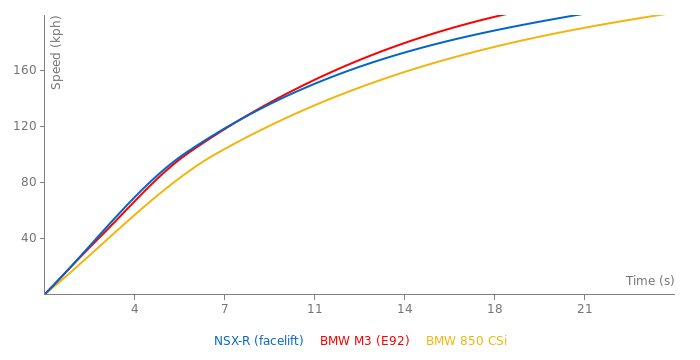 You think Motortrend and Car and Driver use massive rollout? Look at this example ;)

When do they start to produce this HSV-01 GT (Road Version)? 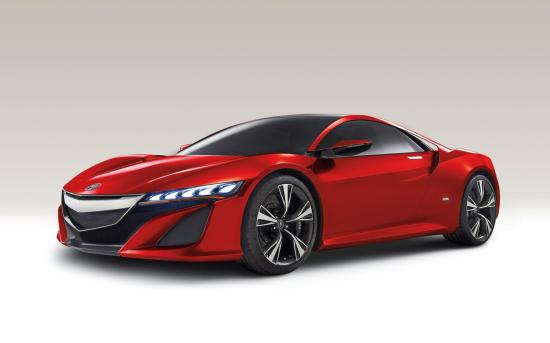 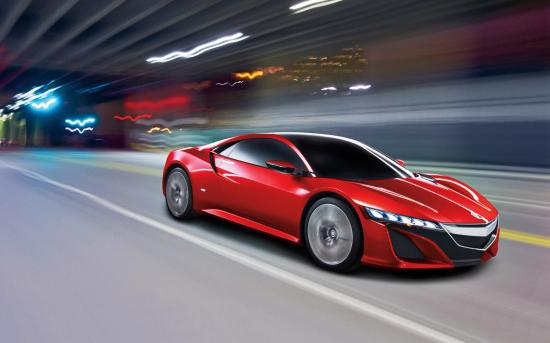 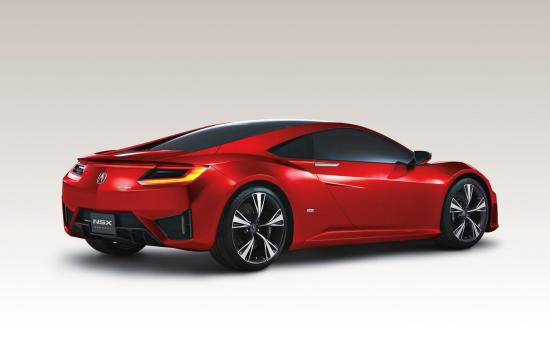 Anyway, the next NSX is going to have 600+ hp only mixed. The pure petrol engine, I guess, shall produce approx 520 hp. Damn, what an absurd setting hybrids on the supercars! Just throwing out their money and time on the wind! This next NSX is going to be a ruined car... in comparison to this 2002 model... Seems to be I'm going to get loved with the Nissan GT-R with such a .. future... till GT-R also get a hybrid...

In 1984 Honda commissioned the Italian car designer Pininfarina to design the HP-X (Honda Pininfarina Xperimental),[1] which had a mid-mounted C20A 2.0 L V6 configuration.

After Honda decided to pursue the project its management informed its engineers that the new car would have to be as good as anything coming from Italy and Germany.[2] The HP-X concept car evolved into the NS-X (New Sportscar eXperimental) prototype. The NS-X prototype and eventual production car were designed by a team led by Chief Designer Nicholas Zander and Executive Chief Engineer Shigeru Uehara, who subsequently would be placed in charge of the S2000 project. The original performance target for the NS-X was the Ferrari 328, which was revised to the 348 as the design neared completion. Honda intended the NS-X to meet or exceed the performance of the Ferrari, while offering targeted reliability and a lower price point. For this reason, the 2.0L V6 of the HP-X was abandoned and replaced with a more powerful 3.0L VTEC V6 engine. The bodywork design had been specifically researched by Okuyuma and Uehara after studying the 360 degree visibility inside an F-16 fighter jet cockpit.[3] The NS-X was designed to showcase several Honda automotive technologies, many derived from its F1 motor-sports program.

The NS-X was the first production car to feature an all-aluminium monocoque body,[4] incorporating a revolutionary extruded aluminium alloy frame, and suspension. The use of aluminium in the body alone

Don't forget about "hybrid" part. Electric motor will give a huge bump in torque for potential good acceleration times.

Yep, but if they are expecting to get 60 in less than 5 seconds,it won't be a truly competitor to the GT-R, or Porsche,etc. :/

400 hp would be good if it is light, but with all those batteries I don't know how light it will be.

http://www.worldcarfans.com/111122939337/acura-nsx-supercar-to-produce-400bhp---roadster-version
Another dissapointment. only 400hp, and expecting a 0-60 time in less than 5 seconds.
I hope that the new Supra take's the example of the GT-R and compete with the best performance cars in the world.

Just the name :/, It's a shame that it won't be RWD anymore

So it's not really an NSX then is it?

Next Gen will get an Hybrid V6 and AWD.
I don't like neither of them :/.
http://www.topspeed.com/cars/car-news/next-honda-nsx-will-get-hybrid-v6-and-awd-ar120795.html

I have always been iffy with spray. Just seems too risky and you only have the power when on the button.

I'm a supercharger fan when it comes to adding forced induction to a N/A engine. Fairly easy to install, no lag and unlike spray the power is always there. I've supercharged 3 different N/A cars/trucks and was always very pleased with the results.

I loved my trans-am, if not for getting married and having a kid I'd still own it. Something about the shape of the Trans-Am front end with the ram air hood that I loved. Wish Pontiac didnt go down the crapper.

I had an LS1 f-body too, but I went the cam and spray route with comparable results. Liked the spray when it was full, but it was a PITA when I had to refill it (cost adds up). No issues with low pressure though, thanks to the Nano system.

The other problem with tuning a car to compete with another is that the other car can do just as much work or more. There will ALWAYS be someone faster out there.

In contrast I had a 2001 Trans Am WS6. I pushed the LS1 to just over 500 horses at the rear wheels with a vortech high output supercharger.

I did have to replace drivetrain parts.. but nothing even close to as complicated or expensive as the evo. When I sold the trans am and bought the evo I thought I'd never hear the end of all the jokes. Most of my friends had never even seen a evo.. let alone could understand why I would want one.

My point is.. a tuned car is never going to be as reliable as a factory car. If you tuned a NSX to compete with a Z06.. its probably going to leave you stranded at some point.

Whats amazing is todays 600+ horsepower production cars that are reliable and come with a full waranty. I would have no problem with jumping in a ZR1 and driving across the country.. but I wouldnt have dreamed of doing that with my evo or trans am.

I didnt have a single issue with the engine in my evo, but I only put 20k miles on it before I sold it. My big problem was the same as Apathy, the drive train.

Not positive what kind of HP per liter I was getting out of it. I live in a rural area that lacks any 4 wheel dynos. Probably a little more than a FQ-400. I tried to mimic the FQ upgrade because I thought it would be pretty reliable as a daily driver. It probably would have been good had I used the factory clutch and replaced it every 5k miles.. but thats a pain in the ass and I wanted harder launches.

I think Mitsubishi uses a very weak factory clutch to protect the drivetrain. Put in one with more clamping force and you can kiss your drivetrain goodbye lol.

I use to have some pretty wild cars and the Evo ended up costing more than any of them by the time it was all said and done. With tuners you always have to be ready for stuff to go wrong but the evo was just too damn expensive to bullet proof the AWD system.

My DSM made a touch over 230hp/l on 93 octane. 461whp with an FP red and a butt-load of supporting parts. My engine was quite reliable, though it was far from stock (built long block).

I miss that car. I certainly don't miss its ability to chew up drive-train components like they were beef jerky though. LOL

what hp/liter performance did you run in your modified Evo9?

Currently I run with my car 151hp/l no real problems, the only thing that broke once in a while is one of my 4 ignition coils mounted in the cyl head, because of the heat specially during high speed Autobahn runs, but knock on wood since I have mounted a external oil cooler none of them broke.. but still have always one in the trunk..just in case!

They arent that much heavier.. and I dont hear of brake fade being much a issue with them.

To say that a stock NSX is going to be quicker around a track than a Z06 is just dumb.

When Gan San says that the American cars will slow down, he means brake fade. Heavier cars will do that, so in an endurance battle, it's not so much about speed as it is about your car running at optimal efficiency. A lighter car's brake will last longer than heavier ones (of which all the 3 American cars are).

Sure, you boost the crap out of that little engine and I bet it will be a monster. Problem is that it wont be reliable, the engine will be toast pretty quickly. Tuners are not compareable to factory cars.. tuners are money pits that will leave you stranded on the side of the road.

I went through this with a Evo 9. It got towed to the shop more times than I can remember and it was only mildly modified. 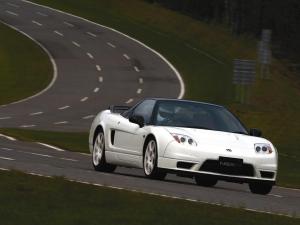 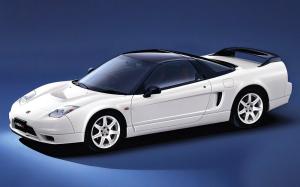 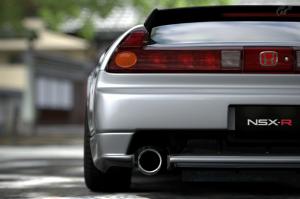 oooooo it does look good from that angle