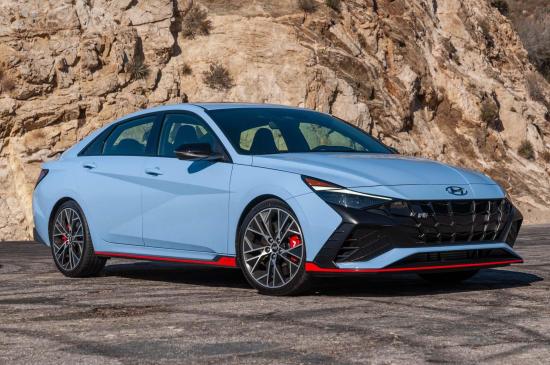 Yeah the Hyundai Elantra N looks and feels like a compact car, but the inside of it makes it closer to a midsize. This wasn't even designed to rival the Subaru WRX, but it's more of a middle ground between the Subaru WRX and the Toyota Camry TRD.

The Honda Accord Sport is a FULL-SIZE sedan and not even a semi-track performance version either, that barely goes against Camry XSE, really more like Avalon XSE. It's a "little" lighter than Camry, but only because of ALUMINUM construction and a SMALLER TURBO engine. It's a middle ground between Nissan Maxima and Toyota Avalon and not at all an Altima or Camry competitor.

The Sonata N-Line and K5 GT, too, are a breed of full-size. Quite a "midsize" car by American standards, MOST mainstream "midsize" outside of Camry, Altima, Malibu and Legacy all would be considered full-size.

Hyundai is HUGE car stuff, and Honda doesn't have a true midsize offering, the Civic is a bit on the smaller end though nowhere as cramped as a Corolla or Sentra.

Such a cool way of comparing cars, I wonder if someone already came up with this, or it's a completely new thing?

He's taken a few cars over the years from what I ...

According to stradman'a videos an SVJ has done around 218 there some 2-3 years ...

Hostboy was a car historian and worked for Dodge/Chrysler/Fiat/Nissan/Zagato. You are ...

Thats like saying if the laferrari didn’t have electric motors it wouldnt be a ...

i'm curious to why they made the race car 4.2L. Since power is already ...

The Camero ss or the Silverado ss with a yanko package wether it’s a ...