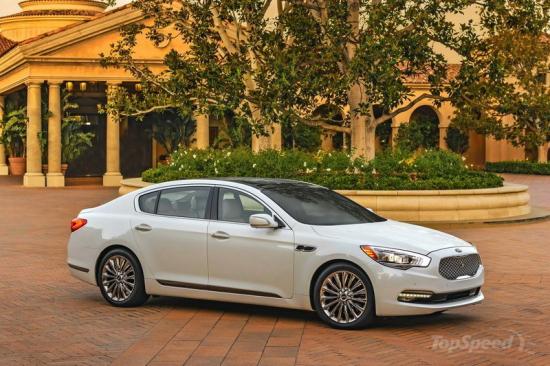 You live in Japan,then,and if Kia is required, you might have to fly to South Korea,to import it here.

Despite the fact that executives at both Hyundai and Kia alike have said on numerous occasions that the two companies are separate entities (and largely, they are), there's still a lot that's shared between the two brands. Common platforms and powertrains are found in a number of different Hyundai and Kia products, though the end results have typically been cars that, to the consumer's eye, are quite different. So when Hyundai got its first rear-wheel-drive sedan, the Genesis, a few years ago and followed it up with the larger, more luxury-oriented Equus, it was only a matter of time before sister company Kia got a slice of the RWD pie. And the first product to use this architecture is this, the new K900 sedan that makes its debut at the LA Auto Show.

Hyundai did (almost) the exact job as what Ford has done to three flagship models.

Happy birthday, Kia in the U.S.! Here's the rear-drive flagship to celebrate Kia's 20 years in the U.S.

Sorry, my stupid phone. Just go on the link to read the entire description, it's 10 times easier. :lol:

At the , unveiled its new, rear-wheel-drive flagship sedan that will go on sale next year. While we have no prices on the K900 just yet, rumors point toward the new sedan coming in around $70k, and will target the and models like it.

The new K900 will be built on the same platform as the , from which it will borrow the powerful, 5.0-liter, V-8 engine that hooks up to an eight-speed transmission with three driving modes: Eco, Normal and Sport.

The K900 will be put on sale in early 2014 â€[/quote] just in time to celebrate Kiaâ€™s 20th anniversary in the U.S. market. According to the company, the K900 "is the next logical progression for Kia. It demonstrates what Kia is capable of and will help redefine what the Kia brand stands for."

I couldn't believe it when i watched this 3 weeks ago. Utter stupidity to ...

Include the McLaren GT in the lower group, since it is the most grand ...

I apologize if I strayed from the CARness of the forum. Well anyway I've ...