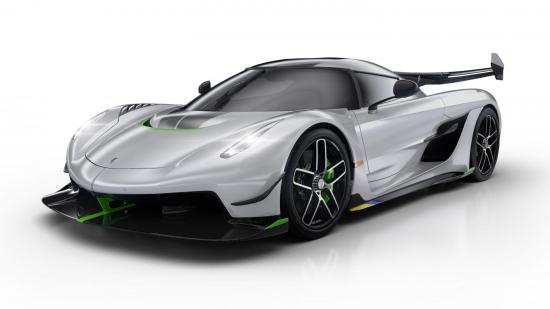 Koenigsegg One:1 vs Apollo Apollo N vs McLaren Senna (P15) vs Koenigsegg Jesko

Jesko (non Absolut) cant accelerate over 280MPH because of downforce

The drag coeff obviously higher than 0.45 (One1)

Even the gear ratios wont help 😭

That's more recent research, I'll have to revise my timings for MPH calculations. But looking at it now, "under 20" seconds will be difficult. For ANY hypercar.

So, I did these NINE months ago, I'm going to have to look at that 300-400km/h figure again which could possibly affect 0-400km/h. This is because I KNOW those figures were benchmarked and were more mathematical modelling but no simulators were used.

I suspect it may go UP! We'll see.

Jesko production has commenced, the first 12 chassis are on the production line, and should hopefully be seen testing sometime soon.

The Jesko Absolut pre-production prototype has been seen testing recently and should make its debut soon.

Interestingly, despite the significant increase in power, they reduced the rear tire width to 325 (Agera and Regera had 345).
I think it will be difficult to run it to 100 in less than 4 seconds...

All we await are verifications to check back on and one has already undergone the process, albeit with a couple of FK ups along the way.

And SO what? If you've ever been married, that's life! LOL!

A FORTY plus minute video with CVK himself? Who DOESN'T want a piece of that pie? You ALL do right! Will this become a Fastestlaps record viewing video?

Don't believe the "everything designed or manufactured "in house" bollocks some state as facts! Koenigsegg utilise Precision Turbochargers from the United States of America.

Yet they'll turn around, in interviews I've read and state that other cars similarly equipped with these are "dragsters!".

LOL! And this ABSOLUTELY includes Bugatti or anyone else. Don't believe anything without proof~ if it's available ~ anyone says. Unfortunately I learned the ****ing hard way with SSC and ultimately lost a years old Social Media account as a result of Nevada.

this cars top speed hasn't been tested yet please delete

Wow!
This engine revs faster than the LFA and GMA T50!

Unexpected. I always thought NA engines have an advantage over turbos in this regard...

Sometimes I use this site during validation sessions. It's confirms what I already in searching thought to be true. Koenigsegg haven't released the final drive ratios for Jesko!

If this is incorrect please forward the evidence. You don't actually need gear ratios for top speed calculations but it's definitely a factor as to whether those speeds can be reached as claimed.

Quote>"But as mentioned above, the car is geared to achieve (or exceed) 300 mph, with 30 percent more downforce than the One:1 has."

I promised I'd do a top speed calculation for the track Koenigsegg Jesko, well turns out there's no need. They did it already.

But with all that downforce I very much doubt it'd achieve 300MPH nevermind exceed it.

Anyway. It's largely irrelevant, they'll not test both variants top speed anyway. As with the Koenigsegg One:1.

Have all 80 Koenigsegg Regeras been produced and delivered?
Just wondering.

That torque drops horrifically! But it's the same for SSC for Hennessey.

As I've said it's an impressive car.

The car is officially called the Koenigsegg Jesko "Attack" now and below is apparently the first production specifications car.

OK so I did some calculations and benchmarking against previous models like the One:1 and Regera and in gear comparisons to other hypercars. These are the results THIS car accordingly to what I've calculated has the possibilities to do. It could go quicker and/or slower. Calculations are exactly that, tyre technologies and gearbox technologies and other electronics have marched on. So I decided to work from the mid point.

Top Speed= This will require further work and benchmarking. But I'll definitely publish these too. Once my other work is done.

Regardless, it's very impressive. And as I stated she might go quicker.

Plz Koenigsegg go on Fast racetrack with this car.

if the jesko can put its power dorn, the lst work properly and the aero be this then i see no reason why it cant beat cars like the senna in spa or other high speed racetracks

This will be a track demon

Koenigsegg Jesko
Koenigsegg has unveiled an all-new megacar – the Koenigsegg Jesko – at the 2019 Geneva International Motor Show. Jesko inherits the mantle left by the Agera RS as the leading track-focused, road-legal car for those looking for the ultimate in vehicle performance.

Jesko von Koenigsegg was a key presence at Koenigsegg Automotive during its formative years. His considerable business acumen helped steer the company through many early challenges. Now retired and in his 80’s, Jesko von Koenigsegg and his wife, Brita, were on-hand at the 2019 Geneva Motor Show to see his namesake vehicle introduced to the world.

A New Heart
Koenigsegg’s first effort at engine development was so successful it saw the company awarded a Guinness World Record. The Koenigsegg CC8S replaced the McLaren F1 as the car with the most powerful production engine in the world.

The next Koenigsegg engine achieved a similar feat when the CCR took the world production car top speed record, again from the McLaren F1. In 2014, we announced the Koenigsegg One:1 with a twin-turbo V8 producing 1,360 hp, enough to make the One:1 the first production car in history with a 1:1 power-to-weight ratio. With 1 megawatt of power, the One:1 was the world’s first Megacar.

Jesko – the all-new megacar from Koenigsegg – is powered by a newly designed, 1280hp (1600hp on E85 in some markets), twin-turbocharged V8 engine that benefits from significant changes to the Agera engine it replaces.

The crankshaft is milled by small manufacturing house located in southern Sweden. It is made to Koenigsegg’s in-house design from a single solid steel billet.

The flat-plane design allows even firing across engine banks and an even more visceral engine sound. Koenigsegg has countered the tendency that flat-plane engines have towards greater vibration by designing new super-light connecting rods and pistons.

The piston’s curved face shapes the combustion chamber in such a way so as to reduce peak pressure while maintaining high average pressure. The ceramic coating on the face of the piston prevents hot spots and detonation when the engine runs at maximum power. The piston weighs just 290 grams. Minimal weight is important because Koenigsegg engines have a very long stroke and at 8500rpm, efficiency of movement becomes critical.

The Koenigsegg Light Speed Transmission (LST) represents a scale of evolution not seen since the development of modern dual-clutch technology at the turn of the century.

LST comprises nine forward gears and seven wet, multidisc clutches in a compact, ultra-light package. The LST is capable of upward and downward gear changes between gears at near light speed thanks to the simultaneous opening and closing of clutches that allows for totally seamless acceleration/deceleration.

That LST gear changes can occur in virtually zero time between adjacent gears is impressive.

What takes LST from impressive to evolutionary, however, is that these shift-time benefits apply when changing between ANY forward gears.

The key to this functionality is found in both the transmission’s unique design and Koenigsegg’s intelligent ‘UPOD’ technology – Ultimate Power On Demand. UPOD is the brain that instantly selects and engages optimum gearing for maximum acceleration.

While modern dual-clutch transmissions (DCT) enjoy millisecond shift times, they can only pre-select for a fast shift in one direction. DCT’s are designed to predict and pre-select the next gear based on inputs from the driver. If that prediction is wrong – e.g the driver wants to shift from 5th gear to 4th, instead of the presumed and pre-selected 6th gear – the driver will experience G-force losses and a slow shift response.

In addition, DCT’s only work in single-gear intervals. From 7th gear to 6th, to 5th, to 4th, for example. If the driver is in 7th gear and wants 4th for maximum power, the DCT cannot pre-select 4th gear directly. The driver has to pass through 6th and 5th gears, wasting time and power.

The Koenigsegg LST overcomes this via its unique multi-clutch design and UPOD technology, which selects the optimum gear for maximum power with a light speed gear change, regardless of whether that gear is 1, 2 or even 5 gears away.

UPOD uses vehicle speed and engine speed to determine the correct gear for maximum power and directs the LST to engage that gear, no matter its relationship to the current gear. If you are in 7th gear and 4th is the optimal gear for maximum acceleration, UPOD can bypass downshifts to 6th and 5th gear and put the car directly from 7th to 4th – in light speed.

Koenigsegg has unveiled an all-new megacar – the Koenigsegg Jesko – at the 2019 Geneva International Motor Show. Jesko inherits the mantle left by the Agera RS as the leading track-focused, road-legal car for those looking for the ultimate in vehicle performance.

I think we're lost on what xenophobe actually means. Xenophobia- prejudice against people of ...

thanks for proving my point mr chironss man lol

The GT and Turbo cars are actually more comparable to the Viper. The reason ...

Maybe 996 Carrera on track So far Redeye is almost 6 seconds slower than ...

Aren't you that xenophobe JDM fanboy that disses on Nissan + Toyota + Subaru ...

Your arguments will get you nowhere, hellboat is hellboat, whether it's a Dodge or ...

I don't think the original Hellcat is faster than the current ...

Too much nonsense coming from you and your Hellcat being superior to the competition, ...