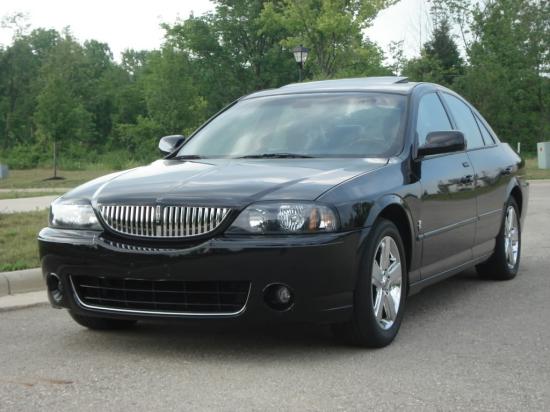 Before the Cadillac CTS-V, there was the Lincoln LS by McLaren Performance. Unfortunately, it never went past prototype stage because of the conflict with the Jaguar S-Type R that it would have to face.

There were no examples made officially for customers, but at least this version exists...

Contrary to popular belief, the LS wasn't just another Jaguar. The LS was a much larger car than the S-Type and used a different V8. Unlike the Cadillac Catera, this vastly improved competitor proved a success in hometown rival Lincoln's career into building an "entry-level" luxury car for the masses and especially for the younger audience, when the Continental and Town Car were geared toward senior citizens.

The LS Sport was the better variant of this car. Sure it had the same power and torque and everything, but in addition to those, it came with improved wheels, tires, brakes, suspension, and a paddle-shift transmission to target younger buyers.

This was one of the rare moments when Cadillac had to compete with Lincoln and not the other way around. The CTS-V came with 400 horsepower, but at the expense of displacing a whopping 1.8 or 2.1 liters more (depending on model year).

Both the CTS-V and the LS V8 Sport were athletic machines on the track. However, the LS V8 Sport was a beast since it wasn't trying to be what it wasn't — the glorified, overpowered wannabe "muscle cars" that the CTS-V (and later rivals like the Chrysler 300C and 300 SRT8 models) were.

Sporting 104 cubic feet of passenger volume, the LS was a true full-size sedan (equal in size to the Seville, barely smaller than the Oldsmobile Aurora and Chrysler 300M, and slightly larger than the Buick Regal); and while at 99 cubic feet, the CTS was only a midsize (luckily for the CTS, it was larger than the 9-5, E-Class, S-Type, and A6; and equal to the 5 Series and S80; but it was still refusing to stick to the American tradition of the full-size class).

Whereas the CTS was partly an evolution of the Catera (the Sigma platform was really an improved V-Body), the LS was something different. The DEW98 platform was truly American, even if the Jaguar stablemate was British; it unveiled the retro 2005 Mustang (on a different platform name, that is D2C); in comparison, GM knew that the Sigma platform was highly outdated and needed to rely on the Zeta platform instead (used in Holden Commodore and Caprice models) to revive the Camaro. The LX platform (loosely based on the LH) followed up a few years after the American Ford equivalent platform with the Challenger. (The Australian Ford equivalent platforms, notably the EA169 and E8, never marketed any cars for North America, most likely due to Premier Automotive Group and cost-effectiveness; basically the same reasons why Ford never slotted a true sports car between the boring Thunderbird and the exotic GT to rival the Corvette and Viper).

The Lincoln LS V8 Sport's direct rivals are the Acura 3.2TL Type S, Infiniti M45, and Lexus GS430; in addition though, it is far more enhanced than either of its Japanese rivals.

I have an 08 LS and my issue is that no matter what we've tried the top end of the engine continues to overheat. Reject the head gaskets, replace the thermostat and even removed it entirely, the radiator and all the hoses are good and so is the water pump. Does anyone have any idea at all what could be causing this?

I have a 02 LS V8. The problem is it won't charge and it will drain a battery after shutting it off over night. Does anyone know what is going on?

I bought an 00 Lincoln LS in 2007 for 9k and only had it for a little over a yr. When some jack ass with no insurance cut in front of me to make a turn using no signal. I couldn't stop in enough time and ran right into him. Pissed me off, totalled that car.

The engine torque numbers are wrong. Torque is 286 lb-ft not 211

Tip: Although the door jamb sticker says tire pressure should be 30 PSI, get some nice summer tires and inflate to at least 36 PSI and she will handle like a sports car. Also, from the factory, the LS came with passive rear steering and once you get used to it, it can do amazing things.

I just purchased a 2005 ls v8 having issues with the car it acts like it doesn't want to go above 45mph sluggish pulling out and looses power on small hills ...anybody have and ideas I've been told different things I had the car put on a computer .the guy give me a few codes but said I was in for a expensive fix...does anybody have similar problems

I love my 2003 ls sport. I've heard a lot of negative comments about these cars. but i always say its about maintenance. You take care of it and it'll take care of you.

So they cheat and get away with it, that's interesting news.

Bugatti4Life the real one 36m

Impersonate me? Good luck getting out with not getting destroyed. ...

God that interior is gorgeous.