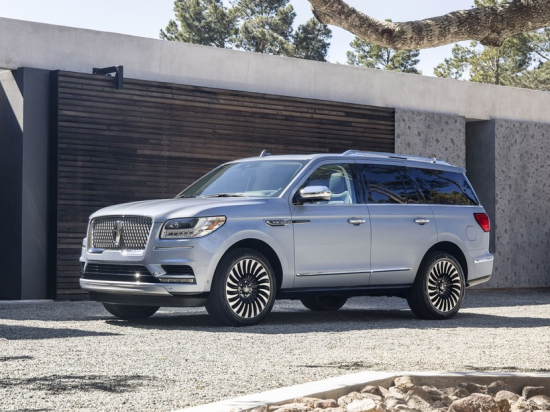 The monochromatic package is the closest thing you can order to make for a "sporty" Lincoln Navigator, but it still isn't any better than a Cadillac Escalade Sport (let alone a V-Series) in stock form.

With that being said HOWEVER, a twin-turbocharged truck is easier to soup up than a single-supercharged competitor due to upcoming stringent emissions (especially in Europe and Asia), so a simple ECU tune will do add +220hp and +255lb-ft/tq into the Navigator's V6 without even requiring race gas or straightpiping.

So with 660hp and 765lb-ft, an ideal Navigator Grand Touring (not even accounting for an electric motor) would easily swoop an Escalade-V.

As Lincoln's core focus is on quiet luxury, the Raptor R/Shelby GT500 engine is a no-go in their department — unfortunately, but understandable, as they want to target their niche audience. Cadillac's demographics are around the same age, but quite a different personality.

However, the thing with twin-turbo motors is that they're not as overengineered in their potential design like single-turbo motors; this is especially true with 6-cylinder engines.

In reality, a 3.5L twin-turbo V6 without electric assist is more like a 5.2/5.3L atmospheric V8 (similar to a Predator, but without the supercharger, and) with electric assist. In pure gasoline guise, instead of 510lb-ft a naturally aspirated V8 Navigator would make 510Nm(=376lb-ft)@3000rpms.

^^Yet, they're not explaining the real reason WHY it won't do such a thing. Well, for FOUR reasons.

The Shelby GT500's engine is the only supercharged V8 left by Ford, and that makes 78 hp more than in the Escalade-V.

They're spending their development costs on something better and not create a cash-cow in what will make a boring segment. Instead, they're creating something unique - don't miss out on the FORD F-150 RAPTOR R! (Basically, still a Navigator but in truck form and with a Blue Oval badge)

Stated above, PLUS why isn't Chevy or GMC building a Raptor rival?? You can't expect something in return if you don't do it! Life is a TWO-WAY street! Do unto others as you do unto yourself! Cadillac doesn't even build an XT6-V or XT6 Hybrid to rival an Aviator GT PHEV!

Even if they WERE to hybridize the Navigator's 3.5TT V6, it would still BLOW the Escalade-V out of the water!!!

From my writing on the Escalade-V page:

All this power and it's still barely faster on a dragstrip than the twin-turbocharged, two-wheel-drive Lincoln Navigator. It's a clear disadvantage of supercharging versus turbocharging. 1/4-mile in 12.7 seconds at 110 mph for the Escalade-V versus 13.1 seconds at 104 for the Navigator! At least it comes with the fun factor that the Navigator will never have!

Contrary to popular belief, it's not a fighter in the performance SUV segment. But it's still a BEAST in the underdog non-European full-size class, and the upcoming Lexus LX750h F Sport will play swords with this steroidized Yoda in the next Star Wars film!

To be honest, Cadillac's "V" version is just an LT4 version of the outgoing L87 model which was significantly lacking in performance compared to the EcoBoost Navigator, as well as the Hemi and Hurricane Grand Wagoneer models. Unlike with the German SUVs, there have been little to no physical exterior changes to make the Cadillac better on the track.

Cadillac's Escalade-V isn't a GLS63 or XB7 rival, don't think of it as that even with this extra power. It's only become a thing because Cadillac wants to remain King of the Hill in the segment.

If you recalibrate the Navigator with an ECU or even some OEM Ford Performance-approved parts that'll give you between 20-50% +power. At 660 hp (and 610 lb-ft of torque from a very low rpm) with stock internals you can expect it to beat an Escalade-V by almost a whole second in the quartermile! You're not gonna get any better than 820 hp and 750 lb-ft of torque in an Escalade-V with stock internals.

Once Cadillac releases the Escalade-V, Lincoln must tease up with the Navigator Grand Touring. I don't think it should necessarily have a supercharged V8, but a plug-in hybrid electric variant of the same twin-turbo V6 should be fair enough to keep up the fight.

You're looking at around 600 hp and 670 lb-ft of torque with this type of engine plus the electric motor. That's about 100 hp and 40 lb-ft more than the Aviator GT.

Maybe with AWD and a 75kg driver.

Funny thing is I almost got myself the TLX, but went ...

At least Mercedes knows how to keep it classy... They go ...

Normally I prefer imports>domestics (as I have for decades) but in ...

Damn they so similar 😂