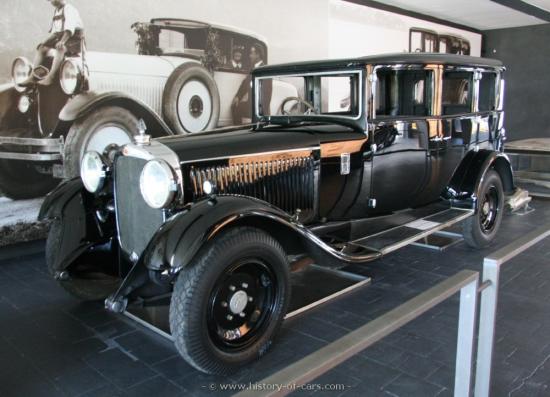 @Fangio Man
Are you sure it's a V6? I thought the first V6 engines used in road cars was after WWII. Lancia was the first one using them if I remember correctly.

@ Fangio Man: That's the oldest and largest V6 I've ever heard of, 7.0 liters. It's a magnificent looking car, just like all other Maybachs. I just noticed something, the front bumper is missing.

The difference to its predecessor, the W3, is among other things the larger engine of the W5, which produced 120 hp at only 2.800 rpm (W 3: a 5.7 liter engine with 70 hp at 2.200 rpm). An outstanding feature of the engine is its fantastic flexibility. It was practically unnecessary to shift gears, i.e. one gear was sufficient for speeds between 0 and 120 kph. A special transmission gear was provided for mountain rides only. Beyond that the SG had a speed gear (hence the addition SG) which permitted top speeds of about 130 kph. These special gears were activated and switched off by a lever-action without clutch.
As with all the Maybachs, the W 5 was extremely expensive. Depending on the body model, its price was between 31.500 and 33.500 Reichsmarks, and a Hanomag Army Bread only 2.500 Reichsmarks. Obviously, it required considerable wealth to be able to afford an automobile of this kind.

Well, you know me and numbers! Ofcourse I will!

This aged… not so well

Das good ya! Love the car too! Well done!

Nah i can't stand Musk and his attitude so i will ...

Thank you, that reminds me, I've to look further into the ...

doesn't look to have the aero for nürburgring, this is not the first Chinese ...