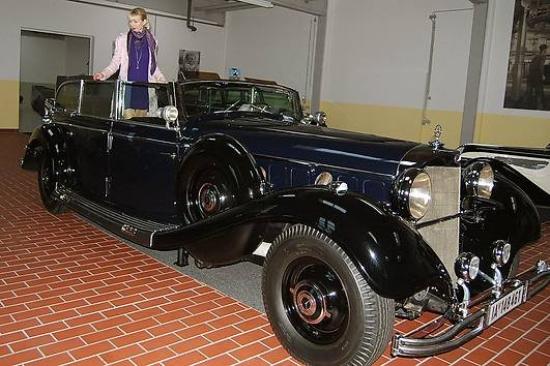 It probably has a butt-load of torque.

You drive this one on street, everybody will step aside from your way and if you drive it to the wall, you probably will has same strength as Hummer.

adolf hitler owned 7 of these 770Ks

Technologically, the massive automobile that was employed for many parades of the time, was absolutely state-of-the-art. So did the design of the chassis e.g. employ various developments derived from the construction of racing cars. To protect the passengers from assassination attempts the car had a mine-proof armor clad floor. In addiditon, it was equipped with windowpanes composed of several centimeters of bullet-proof glass, armored doors as well as a retractable armor plate behind the rear seats. Howerever, the convertible soft-top, in the nature of things, does not have any possbilities to be armor clad. The predicament as well as the fact that H***er used to ride in parades with the top down, and in addition to that liked to stand in an upright position seem to render these preauctions more than dubious considering that they would have offered any protection below the waistline only.
The car was powered by a colossal 8-cylinder supercharged inline engine with a displacement of 7.6 liters which produced an output of 230 PS already at mere 3200 rpm. In spite of the enormous weight caused by he massive plating this enabled the car to reach a maximum speed of 140 km/h.

This is like a comparison between the Dodge Durango SRT 392 and the Ford ...

AWD Nismo 400R vs RWD Callaway most likely spinning the wheels would explain the ...

@fastestlaps, can you change the picture to this one?

Hold up, wait a second- look at the power-to-weight ratios then ...

There is really no point in having this page added. It's ...

I'm only doing this comparison because the X5 M50i hasn't gotten ...

I don't think Ferrari would ever attempt to copy Chevy's design, ...

No it did not.

I meant more performance-wise than chassis-wise.. You're right the first AMG ...