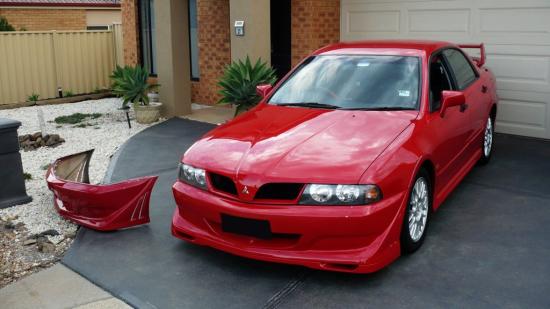 BMW 330i vs Mitsubishi Magna Ralliart

Rated as one of the top Aussie car's you can buy:
https://www.tradeuniquecars.com.au/feature-cars/2007/2002-mitsubishi-ralliart-magna-best-aussie-buys-5
Critic's were full of praise for the car's abilities.
Mitsubishi should revive it.

It's really ashame as they were quite a good Australian made car in this class & the only one to offer AWD at the time, Australian's seem to hate them with video's riddled with lies like this one:
https://youtu.be/CyxW4S74TbI
What amazes me about that video is he is claiming all the Magna driver's were at home when he was finding them parked on Seaview Road Henley Beach as evidence that people don't drive them.
Every house on that street is over $1 million to purchase - that only tell's you that Magna owner's are rich.
An auto Monaro CV8 has 225kw going to the rear wheel's - when it was closer to 160kw.
But also the way he talks about how the local Mitsubishi market failed due to the car not being able to compete with the competition as the reason why they shutdown in 2008 - the year the GFC hit.????
His 3 speed Bluebird certainly is a better option to him I guess as he bag's the richest people in his town.
Even now their has not been a car that has offered a faster NA V6 with the 2001 210kw 6G74 Ralliart Magna's in mind, a car with better Aerodynamics, fuel economy, value for money & they were also the lightest car in their class by a long way.
210kw with 350nm+ (understated) weighing 1470kg occuring to the Vicroad's registry - significantly less weight with a flat tire repair kit like the competition were offering at the time.
Plus their was the Supercharged model's.
Reminds me of the time the R32 GTR kept winning in the Bathurst Touring Car Championship in 1991 & 1992 - Australian's just kept booing the winner's which eventually prompted Jim Richard's outburst towards Australian racing fan's in 1992.
Sometimes I wonder if those supposed fan's think that they are to blame that all these fantastic car's appeared, than disappeared due to their own arrogance.
HSV's & FPV's were heavy, very heavy despite having power - comparing them to the current GTR is like comparing a Camry to a Ferrari.
But their own view's shaped the weight they wanted in their cars.

The 210kw Ralliart Magna's didn't meet emissions regulations.
So Mitsubishi couldn't advertise them, even though they mixed them in with the 180kw version's.
They are pretty fast for a car that was released back in 2001, definitely break's into the 13sec mark down the 1/4 mile.
Officially released in 2002 though, since the 2001 model's only had 210kw.

They are really nice looking car's too????????
https://youtu.be/01gKzyVFr2U
But they also have a aerodynamic co-efficency of 0.28, it's very difficult to make a car look good while having impressive aerodynamics; but I think Mitsubishi did really well here.

This is a 6G75 AWD Magna with launch control:
https://youtu.be/3kKJF5bew5E
It has a purposely built auto gbox to handle all punishment's & it's been tuned (fully tunable gbox with stock ECU) to run alot higher oil pressure & fast gear change so I can easily say it changes gears as quick as a DSG.
AWD Magna's come with EVO VII GTA Gbox & tuning so it's very flexible.
It has a EVO X paddle shifters for easy gear changes.
Launch control was implemented courtesy of the converter being rebuilt so it can stall for a hard launch.
A different guy has a similar setup on his AWD Magna with the naturally aspirated 6G75 motor, it puts out 232kw & 437nm.
0-100km/h in 6.2sec & the 1/4 mile in 14.3sec - this was achieved without launch control & a extra 100kg.

I think this is the video that is inspiring people to do up Mitsubishi Magna's:
https://youtu.be/T4gxoJfVnmk
It's only a Naturally aspirated 6G75 Mitsubishi Magna, yet it pulls away from the worked BMW M3 down Conrod straight.
Inspirational ????

The only Ralliart Magna's available in 2001 according to the introductory year this page specifies, was the 5 210kw Ralliart Magna's that were converted to production from the showroom floor; not the 500 180kw version's.
They are lighter too as they didn't receive all the standard features of the 180kw version's at 1450kg.
You might need to re-evaluate this page with that in mind.

The most powerful Magna ever produced was actually a TJ series FWD VRX that came
with a Sprintex Supercharger.
It benefits from the many extras offered like the dual exhaust system & it's final power output was 251kw & 440nm while weighing 1472kg.
The AWD model also came with a Sprintex Supercharger that boosted power to 226kw & 422nm while weighing 1604kg, definitely the best handling Australian made car in it's class at the time of launch.
They have started doing manual conversions to them which makes them extremely powerful due to the 80kg weight drop it brings, in fact if you switch to a flat tyre repair kit than it makes them lighter & more powerful than the locally delivered EVO X.

Only 5 210kw model Ralliart Magna model's actually existed for production officially.
They were converted to production as such from pre-production or ex-showroom status.
But here's the thing, the upgrade is available to do; so is calling it a custom upgrade really necessary since it was officially done to some of the model's within the range?
Car throttle added it to their top ten list of fastest Aussie 6s ever made recently:
https://www.carthrottle.com/post/the-10-best-aussie-built-cars-ever/

Performance drive put the Ralliart Magna in the top 10 list of fast Australian made 6's:
https://performancedrive.com.au/top-10-fast-aussie-sixes-part-two-2312/

MG ZT190 Vs Ralliart Magna:
https://www.motoring.com.au/mg-zt190-vs-mitsubishi-ralliart-magna-3900/
Does the top speed limiter come on at 240km/h for the Ralliart Magna?
My friend tested it with a digital tachometer & found that it hit 248km/h before the limiter kicked in.

Just depends on whether you have the 180kw or 210kw model Ralliart Magna.
Wonder why MMAL never came forward about it tbh?
I'm suspicious about whether Autospeed was supplied with a 210kw model when it killed the Subaru WRX STI in a straight line.
http://www.performanceforums.com/forums/archive/index.php/t-67120789.html