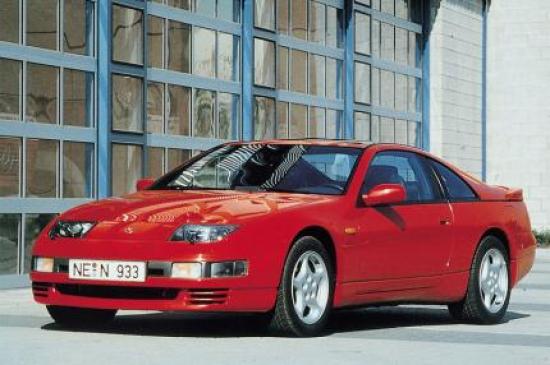 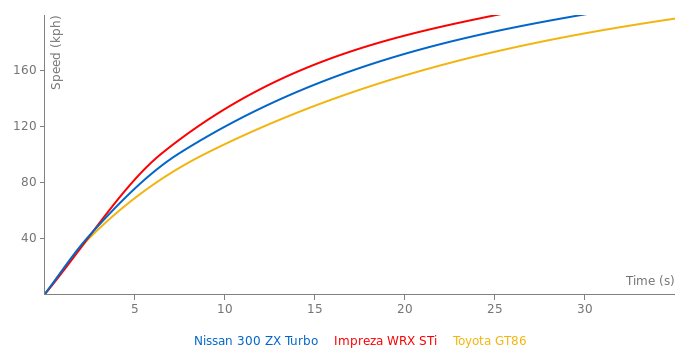 It’s wierd. Why is it always famed to be slow? Every time I drive it and some dip wad with some loud a$! exhausted Mustang or throaty muscle car wants to race, it never looses. ????‍♂️ There is undeniable power vs power. But anyone who can actully drive, knows it more about the driver than the car. (When racing red apples to green apples). Like your tool belt, there’s never one tool for every job….unless your a tool!! Take a super cool car, drive it every day, stuck it on a track with real tires, and 300TT even stock is hard to beat for all around fun and performance. You can spend $225k on a Bentley GT and launch at 11.4, but if I took the $150k difeeence and put it into my Z….well…..you can keep the boring Ladyboy Bentley.

It's sad that this car is much slower than the Toyota Supra Turbo. Hell it's probably not even much faster than the N/A 300ZX.

10 miles on the blue ridge parkway with my 96TT with 100 treadwear tires, 3 rd gear, 60-100 the whole time, for the money and overall comprehensive performance, it’s hard to beat the untapped ability of the 300TT.

I’ve owned both. The weight of the 3000 gt feels like a my 72 impala. The Z with only one cold air intake mos($80), 100% stock is twice the car. The gt is nice, but Mitsubishi make good tv’s and air conditioners not award winning race cars. Keep up with SCCA racing and see how many 3000gt’s you see. Just saying....heck, my 240sx with a $500 turbo upgrade made better times and handled like a Kart. Just sayin

Z32 all day long. In fact, we have two manual TT's in the family and what awesome all rounders they are. And without the boy-racer image !!

I would take a 300TT any day over that ugly vr4

The Z32 wasn't a straight line car like the GTO/VR4. Obviously due to its 6 speed and AWD the VR4 would easily beat the Z to top speed by a couple car lengths.

That being said, let's not forget that modding a Z32 can turn it into a monster.
Thanks to whoever posted those articles, what a blast from the past!! These days the only way to know stock performance of any of the 4 is those old magazine articles since most of those JDM cars are modded these days.
The Z32 was much more of a fun car, and it was well balanced. The GTO, although very fast stock and modded, is definitely an acquired taste, same with the others. The Z imo was the best balanced, no shame in running 13.8-14.0s in the quarter, it was slower than the others but had a charm about it that the others lacked. Just my opinion.

And the gearing on a stock Z32 is trash as well. They're nice cars and handle well, but they're not fast, and it wasn't very fast even when it debuted. It got a 5s flat once, and never again, I'm guessing Nissan threw a hot test car since the rest of the times it got were slower than the others.

And that list of links wasn't supposed to say VR4 vs, It has all 4 beating the Z in multiple articles. It's not beating an STI, especially an older one. The launch alone would put 3-5 car lengths on the Z. It would catch up mid-range but still not enough to actually pass.

The Z was the slowest of the JDM cars stock and lost to its competition in 1993. The fastest ET it ever ran was 13.7.

Its not pulling on much.

Best Motoring is a famous Japanese television show that’s focuses on Japanese performance cars. They’re drivers are actual race car drivers that have WON AWARDS They tested all the performance cars of the era. In 1994 Mitsubishis 3000GT VR4 beat the R32 Skyline GTR a car that weighs 3100 lbs and dynos 270@whp https://youtu.be/fwps3TVcJMM ! And then in 1996, the GTO MR, which is identical to the 2G VR4, with 67 less pounds, bested an R33 Skyline GTR pulling a 12.8 quarter mile https://youtu.be/ukVsqR66ldE The 1990 300ZX Twin Turbo got 14.1 to the 1/4m for a TT 2+0 Slicktop, the lightest year https://youtu.be/EWd70mdVfao
The Skyline GTR was the fastest model Nissan made, their Halo car. The J spec VR4 is identical to the USDM version, how would it lose to a 300ZX Twin Turbo which is a much less powerful and heavier car than the Skyline GTRs above? These videos alone prove how much faster the VR4 is

https://www.caranddriver.com/reviews/comparison-test/a15140581/nissan-300zx-turbo-vs-dodge-stealth-r-t-turbo-archived-comparison-test/ - The 300ZX Twin Turbo won with a faster ET and trap. The Stealth weighed 200 lbs more. Car and Driver states this is the fastest Z they've ever tested, and can't ever get these numbers again from the Z for over 4 years of testing

Seems the Z32 isn't all it's shaped up to be, it lost to a 250HP Corvette by a SECOND around a track and ran identical numbers. QUOTE: When all was said and done, the Cor¬vette turned laps in the one-minute 38-second range, at an average speed of 64 mph, while the Nissan was almost a second per lap slower. "No big deal," you're saying? On the contrary. It is a big deal in a two-hour race. Far more important, the Corvette—with its hip-hugging seats, smooth power delivery, and neutral handling—is far easier to drive for long peri¬ods at those speeds. To put the Cor¬vette's racetrack prowess into per¬spective, remember that the big V-8 produces 50 fewer horsepower than the twin-turbo terror (LOL) https://www.caranddriver.com/reviews/comparison-test/a15112003/1991-chevrolet-corvette-z51-fx3-vs-nissan-300zx-archived-comparison-test/ http://www.300zx.cl/ga2/300zx/images/cvsg4.jpg - 300ZX Twin Turbo - 0 to 60mph 5.6, 0 to 100mph 16.3, quarter mile in 14.6@96mph
Car and Driver never got this slow of a time in a 1G VR4 or Stealth Twin Turbo

Publications notice the VR4 being markedly faster than the 300ZX Twin Turbo.
Since 1996, it became 320 hp and 315 lbft. It feels decisively more punchy than the contemporary 300ZX turbo yet without adding turbo lag -AutoZine Magazine https://www.autozine.org/Archive/Mitsubishi/old/GTO.html

Wikipedia states that the 2G VR4 is faster. The new 6-speed, while notchy, was geared well and the extra horsepower and torque allowed it to out-accelerate most of its' rivals from a standing start to top speed. Road tests at the time showed the second generation 3000GT VR-4 to be capable of 60 mph (97 km/h) in 4.8 - 5.4 seconds[18] and the quarter mile in 13.5 seconds at 101 to 105 miles per hour (163 to 169 km/h), making it faster in a straight line than the Nissan 300ZX Twin Turbo and Mazda RX-7 Twin Turbo.[19][2][20] https://en.m.wikipedia.org/wiki/Mitsubishi_GTO Wikipedia has to have sources to prove the above to be true, or it gets taken down. 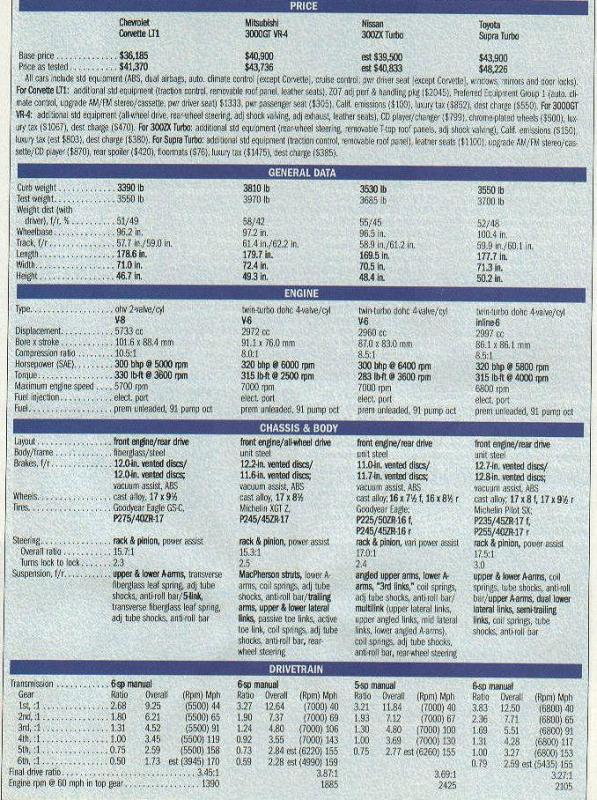 Alright when my z was stock I walked wrx sti’s from 40roll, from a dig the sti would be about a car ahead but the z’s long gear make it catch up and pass it easily. the low 14s to high 13s is about right for the quarter mile, and the actual 0to60 is 4.7. These are things that I know if your z doesn’t run like that you probably have an auto, high miles or something is wrong, yes 100,000 is high

I know 4 years is a long time to pass before an answer is posted but...

As for power it'll be BHP, Back when this thing was built the jap's had some sort of agreement to limit their cars to around the 280bhp mark.

Im confused about the source of this data
1)Is the a forign Spec version of the car?
2)Is the Hp rating Brake Hp or Crank Hp?
I ask because the United States Spec model came with 300HP and would 1/4mi in 13.6 seconds. Also road & tracks 1/4mi times seem a little high for the cars tested in the article sited on this page. 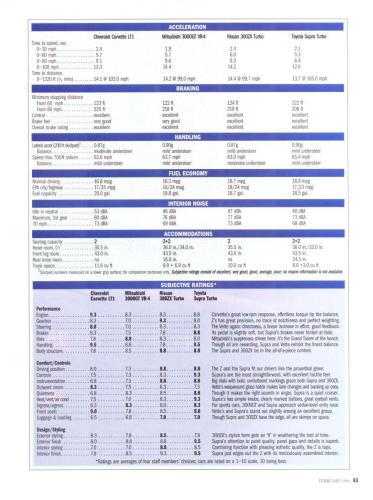 He needs it for his Giga factory expansion on Mars! Haha!

It's utterly pathetic how Musk's fanboys/speculat ors suck up his arse and ...

Yep this is all part of the bullshit and lies that ...

Maybe they can use some of that extra "cash" and bring the Tesla Roadster ...

so far, the only high 10s cars are the ones with factory plates. which ...