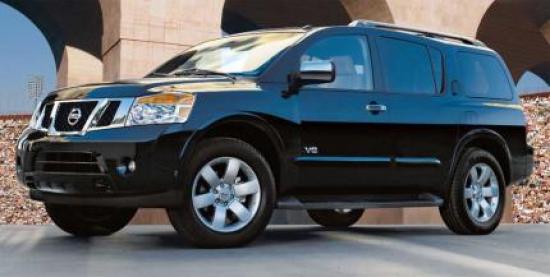 The Nissan Patrol (an off-road oriented version of the Armada sold in other countries) is, believe it or not, a popular tuner car. Apparently some garages in Dubai modified the hell out of a Patrol owned by some rich oil baron's kid. According to Motor1, it was caught by police at 217 miles per hour. To achieve this it had a turbocharged engine, a JET FUEL tank, and a "speed enhancer" (probably a second engine modified to run on jet fuel) and a computer to operate this system. However, he said that some of his friends modified theirs to hit 248 miles per hour.
https://www.motor1.com/news/33433/jet-fuel-powered-nissan-patrol-seized-in-dubai/
However, there's more. If you've seen The Grand Tour, you probably remember this car: https://www.youtube.com/watch?v=V12C6xuMwmE

Apparently, according to 1230video on Youtube, all of it's internals, drivetrain, and even interior, was swapped out with that of a Nissan GT-R. It has 4 turbos, of course and it's engine is bored out to 4.0 liters, and it's also got a roll cage. It runs on road-legal drag slicks, and has 1900 horsepower, so no wonder it beat a Porsche that had half the power.
https://www.youtube.com/watch?v=wHf2ejIZ44g
But that's not all. If you want proof, 1230video made this video with a 2000 HP drag modified Patrol hitting 205 mph with 4 turbos and 4 doors.
https://www.youtube.com/watch?v=zU_oAu4sqC4

What is this doing here? Giant SUV on performance car site = FAIL

i saw this with some 20s on it. Nice.
But i think the toyota sequoia looks better.

fake news lies and misguides everyone