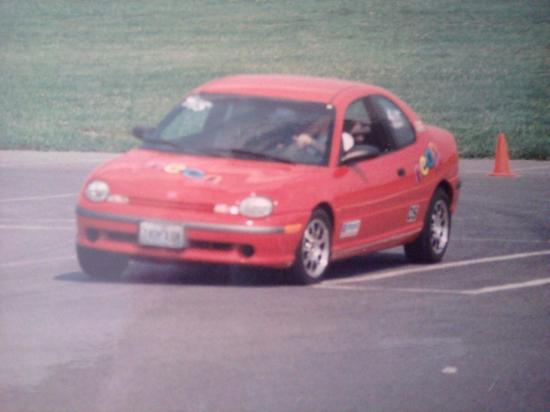 Uh, we really need to change that main picture. Btw, I remember this one sold in my country but instead a Plymouth, it named Chrysler Neon ACR.

I finally found some old photos of my 1995 red Plymouth Neon ACR. Sorry if it is a bit blurry. The one on the lower right of the page shows me at an autoX in Frederick, Maryland cornering at more than 1 g (R compound tires). :)

Yes, completely street legal. However it was limited in production. The authorized dealers had to send a copy of the buyer's SCCA membership card with every order since it was intended to only go to competitors. The factory wanted some racing publicity and they got it.

Yep, unlike normal street Neons the ACR did not have a top speed governor. It could reach its top speed of 130 mph on some road courses. In Solo II competition the straights were too short, and I rarely went much over 60 mph (SCCA tried to make them tight enough to keep fast cars from exceeding 70 mph). Great cornering grip. A Neon ACR set up like mine could pull 1.03 g on a skidpad. The stiff race shocks that it came with made it harsh, but responsive. It was indeed fun to drive, and I drove it for 219k miles over the course of the ten years I owned it.

@ Viking: The top speed isn't bad, I'll bet it was fun to drive on the track, although it didn't have much power.

Yep, same color even. Those look to be the stock wheels. I used the stock wheels for street driving, and American Racing AR24 wheels (same size 14X6 as dictated by the rules), with B.F. Goodrich Comp T/A R1 race tires in competition. I had about 2 degrees negative camber up front with a little toe out, in the rear almost zero toe and camber. I ran 225/50R-14 front, and 205/55R-14 rear. Yes, a reverse stagger in width to improve front grip since it was front wheel drive.

@ Viking: So this is what you raced in in SCCA, cool.

I am sorry that I haven't found a lap time for the Neon. There are plenty out there, but unfortunately all the lap times are for Neons with "R" compound tires. When these were sold to SCCA members, we were all told that the original equipment tires were just there to keep the wheels off the ground, and we would have to replace those cheap tires with race tires for competition. These cars were designed to be used with "R" compound tires, and I can't find any laps done with the original street tires.

Hi admins, could one of you exchange the blank main photo for the nice picture that I just added. It is the one on the right, thanks. It looks nearly exactly like the one I used in SCCA competition, but mine had fairly large magnetic decals from the factory that spelled out "NEON Racing".

The picture is a completely stock ACR on the original wheels, without the factory supplied magnetic decals. It is easy to see that it is the ACR package since it has no side molding, and just holes instead of fog lights. The holes were supposed to help with brake cooling.

@Wads I took a look around for Neon ACRs and I found a good picture: http://www.comicozzie.com/gallery2/v/1995/AX/95AX-73.jpg.html

Viking..... if you have a good picture provide a URL and I'll add it if I can.

I looked but the images on Google all look like riced up Neons so not sure which to choose.

I would appreciate it if a moderator could add a nice photo of this important car. It was available as a Dodge or Plymouth, but one had to have a SCCA membership to order one. There were only 400 ACR coupes made in 1995, so it is fairly rare. The race shocks were ridiculously harsh, but very effective. The special adjustable front struts allowed a lot of negative camber to compensate for body roll. It was almost unbeatable in its class for several years. I didn't have to worry about other cars in Solo II until the 2000 Celica GTS came out and joined the same SCCA class. The gearing is pretty tight, actually very similar in some ways to a 2011 Mustang GT with 3.73 axle ratio. Same 7000 rpm redline, similar shift points in the first five gears. The Mustang has six speeds of course, and reaches redline a lot quicker, but otherwise it is similar, especially 2nd to 5th gears.

I have uncovered a lap time for one of the Neon ACR Coupes used in the Neon Celebrity Challenge races. It was a 2:52.085 lap for Road America by Gary Fratienne on August 18, 1996. Unlike our regular SCCA competition cars, the Challenge cars used reqular street tires. They did have roll cages and fire extinguishers, but neither of those mods would greatly affect lap times. Still, I am not going to add this as an official lap time unless it passes the muster of the Admins. I will however see if any of my old magazines have a lap time for a completely stock ACR.

I drove one of these in SCCA Solo II competition for eight years. I owned the car for ten years, but it stopped being competitive as it neared 200k miles. Easiest car to drive on a track. Just add street legal race tires and a little negative camber for the front. Great track car, but a bit harsh on the street with the factory racing shocks (dampers). 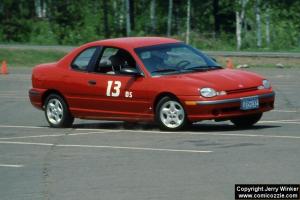 Ahahaha! Absolutely and resolutely not! ;)

He can't handle the truth...