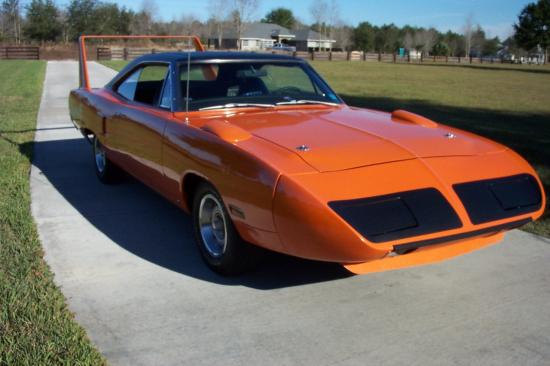 Missing my Mopar  1y ago

I've wittnessed 150MPH in 68 Charger [on it's speedo] that roomey had back in the day with 426 dual 4bbl, new process 4spd, Dana 60 sure grip. One memorable trip to Lincoln , Ne from Omaha lasted all of 20 minuets on I-80. Even new tires then were pretty sketchy[cept for Goodyear BlueStreaks which car didn't have]. Only 3inch drum brakes all arround were useless over 75mph. Mopar didn't require avail frt discs then [Incredebly] on this class car as GM was doing at this time. Unlike the fairly safe muscle cars of the last decade , this vehicle was definitely brutally dangerous.

There's alot bs ,lies and big time exaggeration in these comments. It's nice and healthy to dream .

This car is so weird

I had a neighbor who had a 440 six pack 70 superbird. 1980 he took me for a ride on a 2 lane country road here in sarasota that was 160 mph plus. We had to slow down when a truck backed across road 1/2 mile away still going 80 when we passed. Ask me how it rode. Simply amazing!
Hell my 70 TA got up to 135 mph quickly with the 3.91 limited slip rear axle. 1 Dodge 1 Plymouth both 6 paks same street. Way cool.
Open the out board carbs wide the air intake sounded almost supercharged on those cars.
Lotta fun!

Plymouth was one of NASCAR legendary cars

I read that the Arizona state police got one in a drug bust they changed the rear ratio to 2.73 and put taller read wheels and tires, it was stock except for these mods, they claimed out in the desert they could catch 1990s Ferraries just by driving right up behind them at top speed and theyed just pull on over because the mopars could hit 205 in street mode.

I didn't read the gearbox. Is that 6 Speed?

The Charger Daytona in that 277 MPH run sounded supercharged, but the engine was normally aspirated.

277 mph! Holy Hell! Simply unbelievable... Tires must have burnt out after the run. And what a sound..mmmm...

@ Super8: I looked on automobile-catalog.com, according to the site, the top speed of a 1969 Dodge Charger Daytona is 120 MPH, I know that can't be right, my Mom's 2010 Grand Caravan can beat that. LOL
I never even heard of a supercharged version of the Charger Daytona until I came to this site.

@ Super8: I don't doubt the racing version can go 220 MPH, the Dodge Charger Daytona and Plymouth Roadrunner Superbird were so fast, they were eventually banned from NASCAR. Most likely it's the version with the close ratio transmission, which was more popular that could do 145 MPH, the speeds you're talking about could only be accomplished with a long ratio, but I don't doubt it could go that fast with just a change in gear ratio, a lot of the old school muscle cars were only limited in top speed by their gear ratios, their transmissions allowed them to accelerate quickly, but probably not reach a speed fast enough to be limited by aerodynamics.

@ Super8: Great video, but the car in the video had a 498 Hemi modified by Roy Barton with 900 horsepower at the wheels. The NASCAR engine was a 426 Race Hemi.

@ Shaggy: The video for Super Daytona hit 277 mph http://www.streetlegaltv.com/news/video-on-board-a-277-mph-%E2%80%9869-dodge-daytona-at-bonneville/
It said it modified just like in NASCAR

@ Super8: Close ratio, don't know the exact ratio number. Only the racing versions for NASCAR could reach 200 MPH, longer gear ratio. The fact that one could do 200 MPH with so few modifications confirms my suspicion that the 426 Hemi makes a lot more than the 480 horsepower that many people claim. The 426 Hemi is my favorite engine from the muscle car era. I got 145 MPH from a book I read years ago, I was still in high school when I read it. I'll believe in the higher top speed when I read it from a more reliable source, many of the top speeds on this site are incorrect. I'm not saying I couldn't be wrong, too.

@ Shaggy: on which ratio? Standard one with 3.23 final can reach 163 mph. Both of them. On test track both can reach 200 mph on slick and some tweek tune in carbs and wide ratio while the engine still standard.

They didn't sell very well, many people were put off so much by their oddball styling that many Dodge Charger Daytonas and Plymouth Roadrunner Superbirds sat in dealerships for 2 years before finally being bought. I would have bought one, they look weird, but they're quick, fast and powerful.

@ Ferrari Driver: Dodge Charger Daytona and Plymouth Roadrunner Superbird were both built by the same company, just sold under different divisions. Only around 500 were built of each, I was blessed enough to see 2 of them in my lifetime, and I'm only 28 years old. Many people go their whole lives without ever seeing one.

Such a nice car, is not it?
In the 70s it was a challenger to other muscle cars like the Dodge Charger Daytona.
298 km/h where fast for the 70s.
It is a pity that there were no tests.
Of course, the track performance would not be as good as in other cars of those days (for example: Lamborghini Miura or Ferrari 'Daytona').
But I think it is a way faster than a Miura in straight line.

I am one lucky person who had the opportunity to see and hear this car.
I never will forget that experience!

@ Viking my friend the aerodynamics of the wing wonders and the 69 GTO with endura front end and no bumpers, maybe close , I think the Wing Wonders slightly better ,too .but the RamAir IV engine capable to 7500 rpm red line ( Pontiac claim 8 grand) with 3.31,3.55,3.91,4.33 final ratios.I speak about Street version of this car , no NASCAR form. anyway in my opinion The Superbird one of the most important Muscle cars with unique styling and brilliant performance.

One of my neighbors had a 1970 Superbird back in the '70 to '74 time frame, before I moved away, but I never drove it, and certainly can't confirm its top speed. However, I do have some very old books (long out of print) that have lots of info on the cars of the "muscle car era". So I could be wrong if my source material isn't correct.

@Bijan I didn't forget about the GTO Judge Ram Air IV, or the Chevelle 454 SS LS-6. Both of those cars had similar real power to the 426 Hemi. However, with the poor aerodynamics of their standard bodies they were drag limited to roughly 150 mph (or a bit more) with the right gearing. The winged wonders (Daytona and Superbird) were capable of 160 mph with the standard 3.23 rear. NASCAR used a non-standard ratio that was taller (a lower numerical raio) and some engine tweaks in order to go even faster.

@ Viking : You're back! That's good!
@ Orenthal : Even Plymouth and Dodge claim that speed, Charger Daytona and Superbird could only run 160 mph on standard final ratio but if it using optional 3.54 ratio it can reach 160 mph +

https://www.motortrend.com/reviews/2022-tesla-model-s-plaid-first-test-review/ Could we please add the torque to the above figures please? Quote>"TORQUE (SAE ...

That's the last you saw it. That has nothing to do ...

Threshold for disappearing a comment is higher now. One of the things I fixed ...

Yes. I was talking more about several laps at once. Pretty sure the Veneno ...

Exactly. I mean it's blind stupidity to even claim such nonsensical writings. But as ...

If my dad had this the last thing I would worry about is air ...