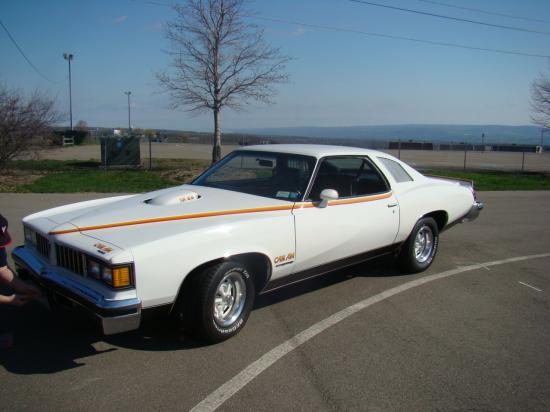 Pontiac Can Am specs

Ford Mustang II King Cobra vs Pontiac Can Am

Ford Escort RS Mexico vs Pontiac Can Am

Ford Escort RS2000 vs Pontiac Can Am

Ford Escort RS1800 vs Pontiac Can Am

It certainly had the bell and whistles but kids that owned the 1969-71 beasts were shaking their heads at this last 'effort'.

Oh, and the Can Am came with a TH 400 not the TH 350, when equipped with the Pontiac 400 motor, which most of them had. Some were produced with the Olds 403 motor for sale in California which did come with the TH350. The TH 400 had a slightly steeper 1st gear than the TH350.
A 4 speed manual was never offered at all.

Strange that the 1977 Trans Am came with the TH350 with an optional 4-speed manual. But I never got beat by one of those cars, ever. I would always nose them out even with the Can Am being a couple a hundred pounds heavier than the Trans Am.

Some say that Pontiac stockpiled special engine parts for the Can Am 400 motor, meaning that they took parts with the lowest tolerances and put them into one engine. I think it made a difference. They also used a special 6x head with a slightly smaller combustion chamber to raise the compression slightly.

I ordered a Can Am from the local Pontiac Dealer and waited months for it to arrive. It was a great car for a 17 year old kid. I immediately started to make it faster. It ran a 15.5 quarter mile out of the factory, but it never ran a top end of 136mph like I see some people say out of the factory, with the single exhaust and corked up catalytic converter.

I didn't like the white Rally II wheels that came on it and had the Dealer install the snowflakes on it. I thought it looked way better.

It had the red interior with white seats.

The things I did that I can remember.
Each one progressively made the car faster and faster.
It was a beast of a car and almost never got beat on the street.

It had Air Conditioning and was suppose to have a 3.08 rear end.
I checked it. It had a 3.23. Don't ask me why. Pontiac people were sneaky bastards like that.

The car eventually ran low 13's/high 12's in the quarter mile.
I had the car at top end one time. Have no idea how fast that was but it could have easily been 140/150 mph.

It handled good and was a great car for as much abuse as i gave it.

If you have any questions about it, I can probably answer them.
Not sure how old this thread is or if anybody still looks at it.

I wish the American company would bring back these classics, the Mustang/Camaro/Challenger are here, they need to rejuvenate these old bad boys and bring the Era of the Muscle back, theres nothing like an Older American Muscle car, No other car has quite the same presence. cmon America get your Arse in gear and give us what we want!...(nd import them over here why your at it..)

Yes the L82 was 210hp in 77 but the base line L48 was only 180hp.Also the Can Am production #s are undetermined since there is no way to track them. The consensus is between 1130 - 1377.They do know 1130 were sent to motor town for convertion. 5000 units were to be made but pontiac pulled the plug.They had to figure away to satisfy those who ordered and would not recv. I'm finishing a restoration on a T/A 400 CAN AM now.I'm stuck on the breaks the back ones do not get any break fluid to them. I tried everything.Just found out that there was a recall on the proportionate valve in 77. Ordered one today on ebay. All brass.Pricey sucker. Fingers crossed. The booster is new as well as the master c.Lines all been blown clean.Thats all that I can think of thats bad.We will know soon enough.

Only a bit more than the production number of the Porsche Carrera GT which was 1282 i think.
;)

With less then 200 units on the road to date this pontiac is getting very rare and has a great history behind it's one year creation.In 77 the corvette didn't even have 200hp. The can am was one of the great ones that year.Pontiac claimed it realy had about 265hp and 325 net lbs torque @ 2200rpm very respectable for only 8.0:1 compression. Take a look around on the road and tell me you see one of these rolling by in a world of cookie cuters the Can Am is the true last GTO made and was org. to carry the name GTO but was pulled the last minute.This car if you can find one is with out a doubt a great investment. Trans Am / Gto look with a great ride & comfort.

Yeah, 200 hp in 70-ties was very good for a small (not muscle's dimensions car I mean) sportcar, but considering the fact that in 1959 there were already V8 390 engines with 345 hp (Eldorado), this Can Am's engine looks like an engine from a milk lorry!

Slow and ugly. A true late 70 to 80 Muscle car. Only available on automatic transmission but you can also order with Super T 10 4 speed manual but as far as i know, only 1 car that using 4 speed manual.