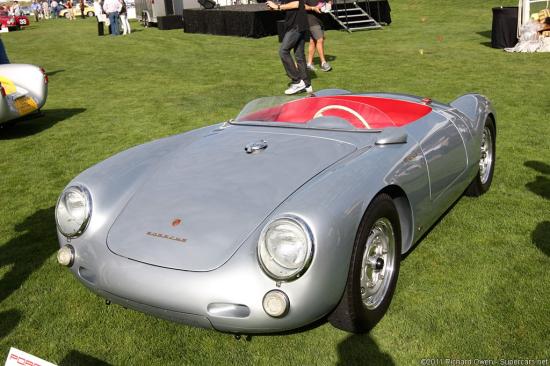 @lafars
There are many other people who said what happened later.

Like Wolfgang Graf Berghe von Trips.
After an accident with Jim Clark, von Trips and 16 other people died, over 60 others were injured!

He said, if he ever is involved in a crash in which spectators die, he would like to die too.

"As the story is told, the 24-year-old Dean was enthralled by the car, but his friends expressed a dark foreboding about the vehicle. It was said that actor Alec Guiness told Dean to get rid of the car or he would be dead within the week, which was exactly what happened. Another friend, George Barris, said the car seemed to give off "a weird feeling of impending doom." Dean's girlfriend, actress Ursula Andress, refused to even get in the car. and Nick Adams said the car made him "uncomfortable."

they say the car was cursed and judging by the reaction of his frends it kind of seems like it, heck even a car using the engine of the "little bastard" and another one using the gearbox crahed later on

sometimes, the words they said were a bit too acurate :P

i wonder if there are others who have said stuff like that and it has happend later?

It was really one week before his death?

Jochen Rindt said about the Lotus 42:
"Either I become world champion, or I will die in this car..."

"If you get in that car, you will be found dead in it by this time next week." -guiness on james deans little bastard (porsche 550)

1 week later he crashed and died...R.I.P

@Shaggy one of the reasons that these Spyders can go so fast with so little horsepower is that they have such a small frontal area. They are small cars. Probably the ultimate version is the 718k RS 60 race car that came out in 1960. Due to new race regulations it had a wider cockpit, a trunk, and a taller windshield, but it was still very small. It had a 1.6 liter flat four with 160 hp at 7800 rpm, and a five speed manual. It was 145.7" long, 86.6" wheelbase, front track 50.8", rear track 49.2" and a claimed weight of just under 1300 lbs. Probably with fluids only 1400 lbs, and maybe 1580 lbs with driver. Very small indeed.

The 550 Spyder was an amazing car for its day, 140 MPH, and with only 110 horsepower, it usually takes around 200 horsepower to go that fast in a car.

One of this car owner is...... James Dean! Im still not born to saw the accident

Don't be sorry, I like to research about this kind of things :P

Road legal 917 cars were created by Porsche I think it should count...
Anyway sorry for making you waste your time over this Mike :]

I should of research more, so, they made 53, well, the point is that they weren't made road legal for homologation, just owners wanting them to be road legal, I guess that doesn't count... do we still have the MC12 Corsa here?

imagine how expensive this car is....

And I know you're not a mod lol, but road cars were made, im just sayin.

Heres production notes, a little bit confusing but road cars were made
http://wsrp.ic.cz/chassis/chassis_porsche_917.html

No, they only made 25 cars, all for racing, I only found that 2 were converted for road use but that wasn't Porsches doing.

Yes, and 12 production cars, so lemme add it!

They made 25 racing cars.

Not actually true as far as ive read. Porsche was required to build 50 for homologation purposes in 1970 according to FIA regulations. Porsche only built 12 road cars, saying it was too expensive to build more. Somehow they got away with it, but what im saying is they did make 12 road car 917s called the 917K.

Are in fact road legal production cars made for homologation purposes.

The GT40 is the MKIII road legal version, it was made because of customer demand, the GT40 was a prototype so it required no homologation, the same applies to the 917 you added which was never made road legal by Porsche themselves.

So my Porsche 917 didnt get added. Are we not allowed to add Le Mans Race Car homoligations? Because the GT40 is on the site, among others...

Yeah, then it's definitely faster lol

In the next AutoBild Sportscars it will have a Supertest.

Yeah and it's probably even faster than that one considering that it was almost ...

Ah, okay. I was confused for a second.