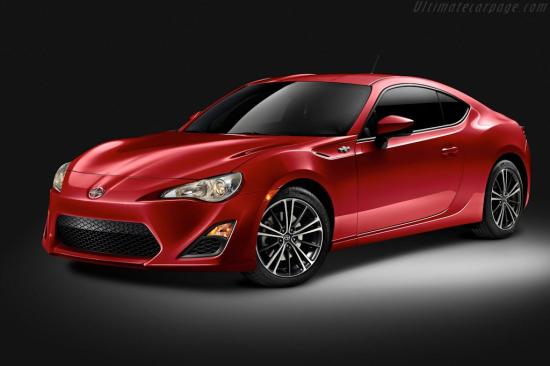 BTW. Scion now survives hard period. Decrease in sales. In 2006 they were selling more than 170,000 vehicles, but last year less than 70,000 units were sold. Nobody wants to buy rebadged Toyotas. Scion's only hope on FRS, but everyone is buying BRZ instead. So Scion's future is under the question...

And I wish Toyota already shut down Scion! Because that's a redundant brand, that makes no sense and goes straight to the fail. There is no need in their production, except FRS, but Toyota simply could export GT86 to the US market. So, Scion, please, disappear.

I saw a gray one, yesterday, these cars look so much more awesome in person. I predict it'll outsell the Mazda MX5 Miata.

Finally, Scion built a car worth driving and doesn't look like it was designed by 3 year olds. I know Toyota aimed Scions at young buyers, but no self respecting twenty something like me would be caught dead in an XA, XB, or XD. They have all the appeal of a radio flyer wagon.

If I had a race track in my back yard I wouldn’t mind having a really powerful car but for the street / public roads it’s mostly a waste for most of the time. A lot of folks seem to miss this reality a choose #’s above all else regardless.

I think the end result / production model looks better than the over the top concept version. Based on most reports the BRZ / FR-S (basically same car) are well worth the cost.

They may not be all that fast but they are among the most fun / rewarding cars to drive for the money and then some according to reports. Many say they’re close to the MX-5 Miata in terms of being fun to drive so in that case there’s no doubt the BRZ/FR-S are well worth the money. People often bring up the Genesis Coupe (are some other merely quicker car) for comparison saying it's a much better deal because it has 274hp and runs a quicker 0-60, etc.

Personally I pick the car which is most fun to drive over the one "s" which is merely quicker, have more HP, etc. Those things only matter if you for some reason race your daily driver's for a living. I don't race my daily driver's for a living so the cars test track #'s mean next to nothing as far as I'm concerned. How the car drives/ feels from behind the wheel is what's important not its 0-60 time.

I wouldn’t want an over powered car for the street regardless because most of the time the posted limits don’t allow for it. A car with adequate / moderate power can be a lot more fun because you can actually run it through the gears without worry of going to jail for running 30+ over the limit just tapping the throttle briefly. If I had a race track in my back yard I wouldn’t mind having a really powerful car but for the street / public roads

Either way, at 28k Usd, like the Subie and Toyota, Im sure its sales will be quite good, id take the Subaru though, but still, if only it looked like the Concept:( a shame..

I haven't seen one in person yet, but it seems okay in photographs. I like the extremely low center of gravity, and the fact that its real world fuel economy is likely to be quite good. Unlike my beast which can pass everything except a gas station. :(

If this looked EXACTLY like the (Concept) This would have blown the sales door Off! I would have put my order in for one Imidietly.

if you read the article carefully, you'll see that 765LT laptime ...

its not really a good indicator of track performance this track. (e.g) the 600lt ...