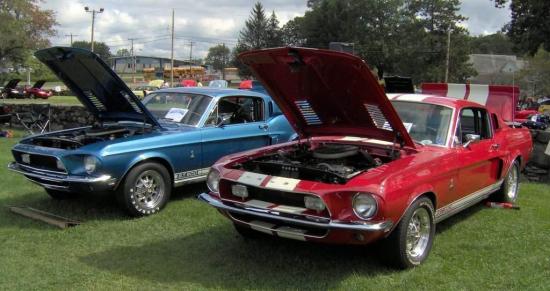 @ Viking : Possibly less than 10 for GT500 that ever produced using 427 FE and all of them is sold by request. I heard there's also a right hand drive model.

@ Dear Viking , very complete and useful comment and of course correct , and I prefer 427 side oiler , too .

The automobile insurance industry in the mid 1960s started to arbitrarily use claimed horsepower figures in determining how much to charge their customers. This caused Ford to under rate the 428 CJ engines at 335 hp, so it makes it look like a big drop in horsepower when the 427 was replaced by the 428. The 427 was a shorter stroke, higher revving engine and did have more power at higher rpm. The 428 had better low end torque. Hard to say which is better overall, but the 427 was more expensive to make. The high revving 427 was the better choice for NASCAR competition, and probably the one I would prefer.

@Super8 yeah, very, very rare. The mild 390 hp version of the 427 was available only until it was discontinued in December 1967. The replacement for it, the 428 CJ, wasn't available until April 1968. Some Shelby GT500s, Mercury Cougars, and full size Galaxies certainly got the 427 engines for the 1968 model year. It was supposed to be available for the Mustang GT as well, but there are no build records for it. Record keeping in the 1960s wasn't perfect, so it may exist, but it isn't certain.

The rarest Mustang in the world must be the real 1968 Mustang with 427 FE from 1966 Shelby Cobra S/C. This one is fitted with it but it's de tuned into 390 Hp instead 425 Hp from previous car. Only Mustang GT and Shelby GT500 that has this engine and it only fitted with Ford long ratio gearbox only which rumored can reach speed as fast as 1966 Shelby Cobra S/C