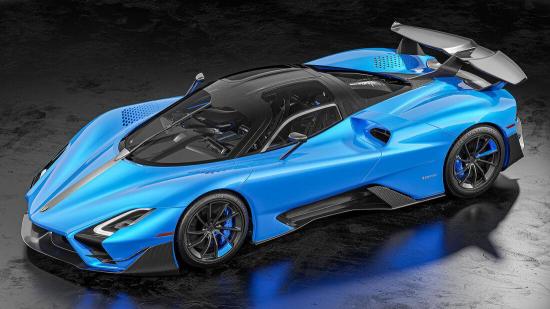 Apparently SSC North America are or were at Laguna Seca the Striker, the red one number 4 (that we know of!) Hopefully some lap times are forthcoming and video.

Just make sure they are synchronized and calibrated. LOL!

As a 6-year-old, Christian von Koenigsegg was taken to a go-kart race track – and the experience would come to change his life forever.

13 years later and with the long-term ambition of building his own supercar, von Koenigsegg launched a trading company to raise funds for his project, one which most people said would be impossible.
Having earned a bit of money peddling frozen chicken and misprinted plastic bags for two years, the 22-year-old entrepreneur launched his car manufacturing firm

SSC Tuatara Striker TRACK CAR is seen for the first time! On a RACETRACK! Testing?

SSC North America the journey is sometimes testing. But you continue to shock and awe! Keep pushing the boundaries! Perfection can be strived for and potentially achieved!

Speculation granted, but the red SSC Tuatara is an AGGRESSOR on the SSC North America website? The SSC Tuatara Striker is currently under wraps and the specifications not yet revealed so BOTH could be unveiled, possibly, very possibly, be revealed at the same time! LOL!

The records are cool, but production is absolutely massively paramount! I can't stress that enough. Obviously, very obviously they are acutely aware.

They'll always keep us guessing, the projects got years in it yet! ;)

It's possibly an SSC Tuatara Aggressor, but unfortunately there's hardly any news just yet. Pebble Beach is around the corner anyway!

Very impressive from what I understand!

So SSC North America aren't making the trip across to the Atlantic to the United Kingdom with the SSC Tuatara. That's a DAMN shame, we would definitely (somehow) of made the trip for that beautiful production hypercar!

Anyway Czinger and Hennessy are with 21C and the F5 so 2 out of 3 isn't anything to be sniffed at!

Meanwhile August is looming and the first production Tuatara Striker is ready to roll.

So we will leave the high speed version for now, she's done enough and we will see what we can uncover about this track version. I've largely left it alone! ;)

SSC TUATARA STRIKER to be unvielved at the Quail Gathering 2022!🔥

Quote>"Shelby also revealed that the first Tuatara Striker will be unveiled in August at The Quail. The Striker set to be unveiled was purchased by a celebrity, though Shelby wouldn't comment on who the buyer is, yet.

The Tuatara Stiker is a high-downforce version of the regular Tuatara and is essentially a body kit upgrade, as opposed to a standalone model. The upgraded aerodynamics include a fixed rear wing augmenting the Tuatara's active rear wing, plus a revised diffuser. The front features a new splitter design, dive planes, and the sides feature six vaned rockers."

PLUS a possible 4WD electric variant!

No, I'm good the high speed version plus 1522 lbs/ft of torque just enough for the hills around here! LOL!

And if you ask did I already know the answer is YES? Saw the ROLLING chassis ages ago! I mean it's on the appropriate channels?🤫

I don't think it will be able to use all of it's power on a track... it will just make it harder to drive.

I'll be comparing before and after. Sexy Metrics style!

As far as removing it will only remove bunch of non-activated accounts and accounts ...