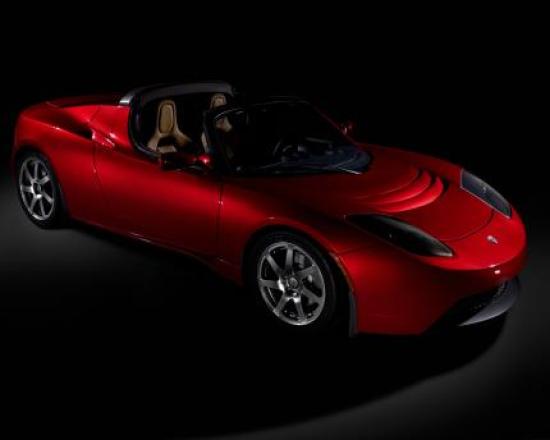 Tesla Roadster vs BMW 335is Cabrio

Is not it funny?

At Bedford it did the same time as at Knutstorp 2, in rain. :D

No offense dud, but youd have to be Incredibly stupid to spend $135,000 on this electric Elise.

drove mine at laguna Seca yesterday at the Refuel Track day held by Speed Ventures. I'm a total novice....all 6 of us with Tesla's were, so after only 2 15 minutes sessions, we were hitting sub 2 minute track times, but barely. The ambient temp was only 75 degrees, but our motors were overheating after two-three laps. Then you are on reduced power. Lots of torque for exit speed but the car still is heavy and understeers a bit. The sport model should fix the lack of toe/camber issues, and have stickier tires. I'd like to see a someone with some experience put the car around laguna Seca. But for those of us non-trackday drivers....it was a blast. I'll do it again.

i am quite impressed at how well this electric car did on the DAMP Top Gear Track, its highly impressive!

P.S. I hope the mains adapter comes with a VERY long cable ;)

You should change the name so that it just says "Tesla Roadster". Also remove the extraneous "unknown" times for acceleration & quarter mile.

That would be amazingly interesting to compare this 100% different piece of transportian to other "normal" piston-engined sports cars. Electric motor is insanely fast but overwall weight of this Lotus Elise based car is kind of disappointing. And my guess is - thats because of batterys. A 6 cell laptop battery normally feels kind of heavy but when you combine 7k cells together you end up with 1200 kg overwall car weight. Remember that Lotus Elise/Exige is 800 kg and is available with 200+ piston engines.

One thing about the travel charger: The travel charger uses a lot of electricity (as much as it can without tripping the breaker) so it might be a good idea to ask before charging at e.g. a gas station. When renting a house, it might be a good idea to ask before you charge, and use a meter suck as the Kill-A-Watt to monitor how many kilowatt-hours you use, and offer to pay it back to the owner of the house. I'm not sure, but I've heard you will be able to charge from a dryer outlet, which would allow for a faster charge. If you want the car to be more environmentally friendly, you can charge from (third-party) solar panels or wind.

Some more information that there were not enough spaces for:

This car is entirely electric (not hybrid, pure electric). To fuel the car you connect the charger plug to a socket on the car that looks like the gas tank on gas-powered cars.

Motor:
The motor in the Tesla Roadster is a three-phase motor, as most large electric motors are. The motor only weighs about 70 pounds and can fit inside a backpack. It can safely spin at speeds up to 14000 rpm, allowing one to drive up to 70 mph in first gear.

Charger:
There are two chargers available:
The fast charger which needs to be permanently wired to its own circuit in the garage by a professional electrician, and the mobile charger which can charge the car from any wall outlet (although slower than the permanent charger).

Cost:
The base price of the car is about 98 thousand dollars. The car is available with various options (e.g. mobile charger, a nicer stereo, a hardtop) for extra cost.

Company:
Tesla Motors is a relatively new car company making only electric cars. It is named after Nikola Tesla, the inventor of alternating current. The roadster is their only car so far, but they plan to release a sedan sometime in 2008 or 2009. You can visit their website at www.teslamotors.com

This is the equivalent to the Lamborghini Sesto Elemento.

That last part right there. That's why I have later justified ...

I found the video, Im not sure how to embed videos ...

That is Sesto Elemento chassis 3, it was originally delivered to ...

This has always been a car i was curious to see ...

I can't stand it because I want to know the lap time of huracan ...

I don't think he has anything to do with Mercedes? ...

Yep. Cadillac too with the ICE cars, they're only going to ...

only because it has more power 🥱🥱🥱🥱