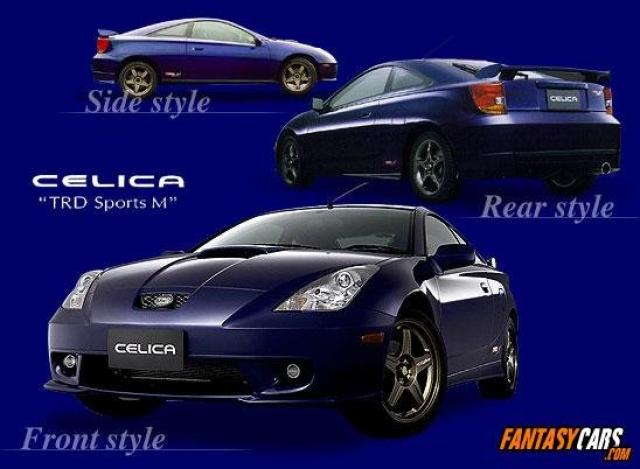 I love TRD Sport M :)fast and very good handling!! I have a normal Celica T-Sport..

I don't consider Celica as a beautiful car, but neither bad. Would be cool, if Toyota made a successor at last. Probably it might come in cooperation with BMW.

BTW, I'm kind of tired seeing all these Celicas... They and RX-8s are the most ordinary sportscar over here.

But I do think they should bring it back, They looked good tuned with nice widebodys, but that's about it, good selling car too. But bring it back and get some performance in it, Dammnit! Bring back all these goddamned good Japanese cars that made a big impact.

I always felt the Celica looked good, but was underpowered. Too bad this version didn't make it to the US, it would have given the Acura RSX-S a run for it's money.

I found this about this car. it says 210 PS.
Original Sports M Factory Upgrades: TRD started by stiffening the monocoque chassis with extra spot welds to suspension structural points & roof pilars whilst reducing sound proofing and thus shedding weight. The engine was fettled with TRD light weight pistons of increased compression, re-profiled high-lift camshafts & lightweight valves. The exhaust system was replaced with a TRD manifold & high response Version S muffler. This combination increased power to 210ps. A TRD Helical LSD with uprated organic clutch virtually banished wheelspin off the line whilst the gearbox ratios were revised to close ratio (6 speed). Suspension was uprated to TRD Sportivo shock absorbers, a thicker front anti-roll bar & uprated TRD suspension bushes. Wheels remained original in design, but were painted dark grey as opposed to Silver. In typical TRD fashion, the body-kit of the Sports M enhanced the original design without resorting to excessive fuss. Unique features included a revised front lip, side skirts, rear valence and rear spoiler - with just two badges to give a clue of the tasty changes beneath the skin.
Note this body-kit was made of injection moulded Polyeurethane so it would be resilient to stone chips and the damage that FRP bodykits tend to suffer from regular use. On this example a set of very rare and desirable TRD original option HID headlights was fitted - an item other 7th Generation Celica owners certainly can't help

@ Super8: Awesome car, I've always like Toyotas, especially Celicas. I wish they sold this version in the U.S. :) BTW I imagine it's pretty fast, capable of at least 140 MPH.

This is Japan market only Celica. It has 200 Hp engine that you normally found on Lotus Elise and Exige but slightly tuned. It's the fastest Celica on Japanese market.

If they'd included Track performance, Lighting would have Bolted past !

I love this thing.

On a practical level the edit function is there one minute ...

The F40 is still one of the best supercars ever made. ...

Ha i could be here for hours highlighting things lol But to keep it ...