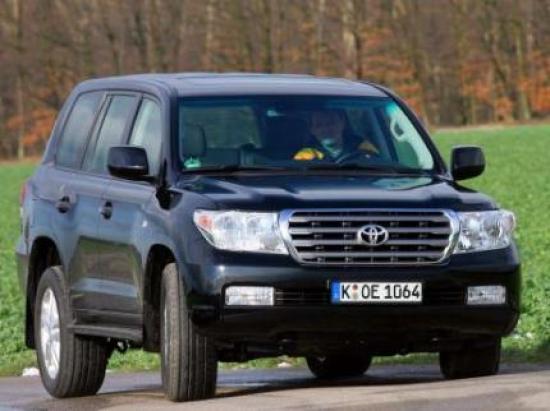 the biggest failure from toyo box will no longer be available in murica, f**k yeah :)

You Europeans may laugh at big off-road diesel SUVs, but when the world ends, these will be in hot demand.

@Georg
Thank you very much for the info!

yes...
Rang Rover V8 diesel
power like a bear, sounds good and convince with low consuption and a smooth quiet running. Very late close to the 125mph mark it started loosing acceleration steam...the engine and ZF tranny developt for this SUV are a true masterpice

Mercedes GL 450 CDI
The diesel V8 sounds sometimes stressed but thanks to 700Nm of torque he never is. It was the benchmark befor the Range Rover V8 now the engine tranny combinations looks little bit dated... needs little more revs and the tranny took slightly longer to shift.
Land Crusicer V8 D-4D
The engine fights the high weight and large tires, it result in a very slow throttle respons, the engine is unwilling to rev, the 6 speed automatic is dated and the engine loose lot of its power in the trannys torque converter. Under full throttle the engine runs rough and has the highes consuption in this test of 18mpg, Mercedes 18.5mpg, Range Rover 20.2mpg..
The Toyota is the farest away from factory claimed consuption (18.0tested - 23.0mpg claimed) followed by the Range Rover (20.2tested - 25mpg claimed) Mercedes is the closest to the true (18.5tested - 20.0mpg claimed)

@Georg
Has the Autozeitung written about the engine characteristics of this three SUV?

Did you win at the annual clown championship already?

Carfection with Henry Catchpole (if you ever get a chance, watch ...

it's successor only came to us when they decided to go ...

the center console buttons reminds you of the nakatomi towers elevator ...

ah yes, yes, it's super comrade to the rescue reminds you ...