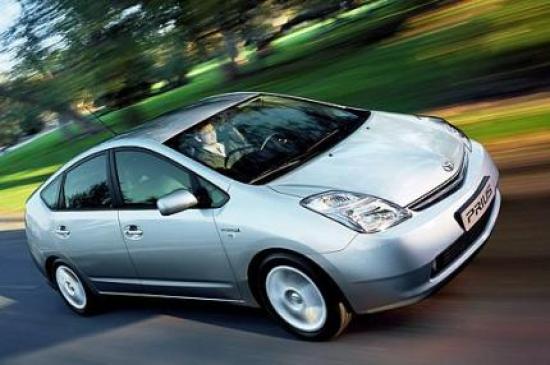 What about the RPM?

It is not incorrect.

0-60mph is incorrect,
It's actually 10.1s, with 16-inch wheel's - better use of torque,
top speed is 182kph
The power is higher with charged batteries both engines work together approximately 139HP

@ Super8: I remember the Brutus, it's a crying shame it was deleted, you, Mental, and I were joking about that car for at least 2 days, fun times. :D

@Super8
Because the Brutus is not a production car. It is just an experiment. It was built by employees of the "Auto & Technik Museum Sinsheim".

Yeah it's shame. I don't know what is inside fastestlaps mind or why he delete that car.

Argh! Brutus... Pity it was deleted, even though it had a laptime.

@Super8
The Brutus is awesome! I will "visit" it in August.

Surely, Mental and Shaggy will remember about that thing ;)

Imagining the old time: Driving this Prius into the night when suddenly strange engine sound is heard from distance. Suddenly, a black terrible old car appear from behind the Prius and ready to make a terror. A flame coming out from the engine and Frankenstein is behind the wheel. What is that thing? It's "Brutus"!! The BMW V12 Frankenstein! And the Prius driver will have no chance to escape the nightmare cuz prius is no match for that thing. The duel is begin.....

"Best way to destroy a Prius with a caravan! :D"

...While the piano is falling at the burning Morris Marina; the Stig is rolling over in Reliant Robin taking a virage; and a bomber squadron bombing the field at the background... To make a complete scenario. ;D

@Flabernat
They drove over one with a tank! XD

America's roads are crawling with these cars, I don't hate the Prius, I just don't like hybrids.

@Fangio Man
Haha, yes, I'd love to see that :)
Did you see what Motor Trend did to a Prius?

Best way to destroy a Prius with a caravan! :D

I always bored when I see this car. There's too many car like this on my neighborhood

I found a funny joke about the Prius, also the whole car is one:

"In the "You asked for it, You got it." category...More bad news for Toyota- a reported problem with the brakes on their Prius Hybrid. The good news -the Prius doesn't go fast enough for the brakes to be a major issue."

It has a 1.5 liter inline 4 gasoline engine backed up by an electric motor, with the cruise on or when sitting still, the gas engine shuts off, when you step on the gas pedal, like when driving in the city, the engine starts and propels the car, the battery for the electric motor is recharged every time you brake, it's recharged by the friction from the disks rubbing against the shoes. A Toyota LMP class hybrid race car using very similar technology won the 2012 24 Hours of LeMans at the LeMans Circuit de la Sarthe.

And what's with that 74160 km/hr? Are we talking about cars here or sonic plane?

It took only ONE second for this car to run a lap in Nordschleif? Are you fuxx'en kidding me?

I drove one as a rental car once, let me tell you, as much as i despise hybrids, I'd rather have a Toyota prius than a Tesla Roadster. The Tesla is a toy, it can only go 50 miles on a single charge, so you play with it for an hour and it takes 13 hours to recharge. It's the most pretentious car in the world.

Meh, I'll stick with my 5 speed Accord for fuel economy. 30 MPG and it actually has some get up and go unlike todays microcars/hybrids.

There is no reason to buy this car besides it's fuel economy. It's fugly, the interior is cheap, it's not even close to being fun to drive, and it has almost no good avalible features. The same goes for the Civic Hybrid. The verdict? Get a Tesla if you have the money.

sorry that was a print mistake in the Autozeitung Magazine... and I copyed it...

Something is up with these times. Some are saying they must be old, before ...

what time at nurburgring?