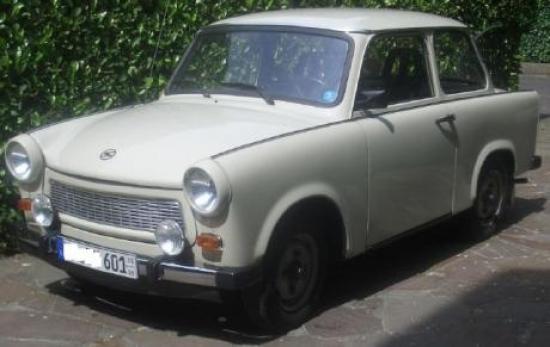 True story from 80' Our neighbour was heating up his huge truck engine almost half of an hour. My mom went to work on her tiny Trabant, by only starting the car amount of exhaust fume totally destroyed air outside. In several seconds cloud of blue smoke completely hide parking truck. It wasn't equal competition. Big truck does not have a chance.

I thing there is one reason to buy this car. Pissing off the climate activities.

@ Eddie UK
I didnt diss this car but in fact I reflected on my experience living next to them and actually having had the pleasure to drive it. Believe me , if other guys had my experience , comments about it would be much worse. Its not a fun car by definition as it can kill you at an only 20 km/h crash - thats a fact from crashtesting. Sorry but its not fun dieing in a trabant . Lets say its not a prestigious death to say the least.

Yes, slow. Yes, smelly. BUT... oh so addictive ! Oh ye of little imagination, just get one and live the fun. Not many good 'uns left so not a lot of impact on the planet. Besides, as my great friend 'The Bish', a vehicle development engineer tells me, " the smoke just lands and decays environmentally in an friendly way", so not even that dirty ! What's not to love with this cute, practical, fun little micro-car. It's day is past but it's future is assured by the millions who still love the few thousand left. 'Diss' it only when you actually know what you're talking about !

This is thé worst car in history of modern carmaking. It stinks and dont even have a fuel indicator. I lived in Russia and u have plenty of low quality cars there, but this is the worst communist production car ever made. Lada is a bentley comparéd to this carton made piece of kaka

@ Fangio Man: The driver is still trying to finish the lap, he hasn't finished yet. LMHO XD

Did it finish the whole lap? XD

Why would anyone want to drive this heap around the Nurburgring Nordschleiffe circuit?, the quarter mile is a marathon for this car! LOL XD

The Trabant P50 did a 16 minutes time at the Nordschleife.

I could tell this was a commie car by looking at it.

People joke about how a Honda with a fart cannon sounds like a Weed Eater, then they hear this...

http://www.youtube.com/watch?v=VKUiJm1L8Hc&feature=search 0-100 in 33 seconds with other exhaust..let\'s say in 35 with error

it depends on the 2cv..the first ones reached 63 kmh...haha you could beat that with a 50cc Mobra motorbike.:D and my MZ ES 175 would rape a Trabant in acceleration :P

it\'s not true..it woudl get to 100 kmh faster than 60 seconds..like 50.and i saw some guys modifing exhaust and getting to 100 kmh 5 seconds faster.i am not joking!! i actually been with 2 friends in a trabant we reached 70 kmh when we passed my college.the dudes were watchign there like : wtf =))

Wow! A Citroën 2CV would easily beat this in a drag race! 60 seconds???

My family used to have a Trabant 601. And is COMPLETELY TRUE what LJUTICA wrote. It has an enormous smell, even old trucks and buses no match with Trabant.

Cant believe you wrote this much about this car lol

True, Troll is much faster than Trabant, hmmm BUT just you wait 'till Trabant gets big double-carburettor and thinned-up fuel mixture, it can get a power increase of up to AMAZING 70-100%!(that's actually true).
With it's super light weight material body (plastic) it's a no compromise machine that's meant to be tuned and driven hard.(it only goes with full throttle).
Did I mention that it doesn't rust?
Now,considering the emissions (which were never measured because they're actually visible), just like it's aero sibling-the F-16,Trabant also leaves 700-1km of "con-trail",which can also be very useful if you lose your way home.With Trabi, once you're lost, you'll never get to g into circle,you'll somehow "smell" that you've already been there.
It's practicality is beyond imaginable!
Furthermore,summer evening by the lake with your better half,just turn on the your Trabi and say moskitos farewell,2km in diameter.
And so on,list of it's pros is neverending...

But seriously now,I wonder why there isn't much more clever materials in today's cars,I'm certain there are some light materials that could be an appropriate solution for use in mass produced vehicles.
Trabant may be car to joke with,but it's an icon and I really (secretly) love it.

what a horrid car!

It's because it has got a two-stroke engine and it uses a petrol and oil mixture as a fuel.This vehicle is definitely good for one thing...Killing all the insects in the neighbourhood. -THE EXTERMINATOR-

This car certainly is not the best in the world. Because unlike normal small cars, this one isn't even economical or clean. 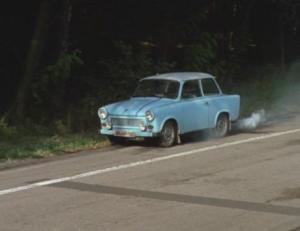 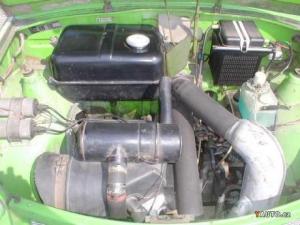 I wonder if anyone will ever change the name to the ...

This is probably the reason: "We never fully settled in, but ...

With Perfomante they screwed up. It might as well have been ...

Quite interesting French site with a lot of lap times, I ...