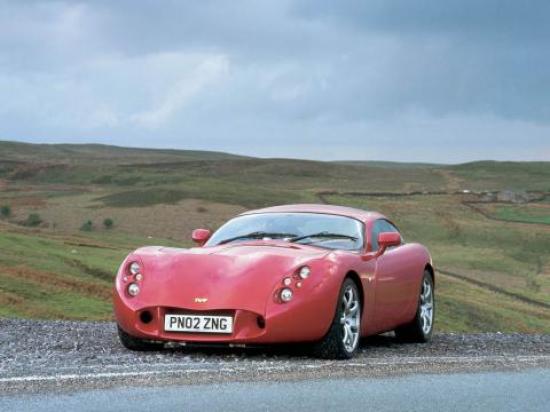 Same thing, Just a rename, And possible retuned Hp rating. Supposedly there both over here registered to 2 average blokes.

Either way is a guess, Not too mention its an Absurd claim by Tvr, But i think that was with the Typhon(Renamed T440R, Or the other way round) Which had 585Bp when announced, So that top speed figure was prolly that one, Which i would believe. A few years ago i was able to see a Sagaris owned by a private investor, And those are putting a bit more then advertised, Not to mention he was able to hit 193Mph on a part of the Autobahn that wasnt restricted, But they only made i think 4 of them, I think production costs.

Its more like 198Mph, Thats a hugely over estimated claim, If anything it wont go past 202Mph at its max, Ive been able to get into just about every Tvr since 1982, And there all extremely fast while having fast top speeds, But this aint hittin 215Mph, Not with 440Bhp and its aero.

Is this the most powerful NA inline 6?

Or while its still for sale use:

is nearly 200 mph.
The T440R's interior reflects its race car origins, and a distinctly minimalist style pervades the 2 + 2 passenger compartment. The trademark TVR style is showcased to great effect. Beautifully machined aluminium componentry contrasts with the polished carbonfibre structure of the car, which is left on show. The interior is focused and purposeful, but with an aura of quality, conveyed by swathes of craftsman-trimmed, Andrew Muirhead Scottish hide in black with red features, matched by black carpets bound with red leather. only one road legal TVR T440R exists - derived from the T400Rs which campaigned and finished at Le Mans. What price total exclusivity ? Just £150,000.

The chassis for the T400R racecars was originally designed for 24 hours endurance racing using sophisticated CAD/CAM software. Each was then hand-built by a specialist team. The T440R's chassis was fabricated by one member of this team on the same jigs as used for the racecars. It is constructed from seamless tube and features the same engine bay-strengthening 'tower' design as the racecars. The only revision for road use was the elimination of the cockpit cross-bracing, although the car does feature a fully integrated rollcage - fully leather-trimmed. The chassis/body construction is complex. It employs a flat under-floor, constructed from resin-sandwiched aluminium honeycomb, to which the tubular and square section chassis is bonded and bolted. A separate carbon-fibre tub is then bonded to the chassis and finally the car's carbon-fibre bodywork is bonded to the tub and to the flat floor. This ensures the car is as stiff and as light as possible.
A great deal of attention was paid to the T440R's aerodynamic bodywork, which - in combination with the front splitter, virtually flat floor, and rear diffuser - endows the car with a very low coefficient of lift and a drag co-efficient of only 0.32. The aero package provides the car with astonishing stability. The handling is predictable, confidence inspiring and hugely competent - in skilled hands and if you are brave! The car has a power to weight ratio which ensures 60 mph is reached in well under 4 seconds, and the V Max is

Not 215 but close to 200 so fast enough! It was never put into production, the following is from Pistonheads.com

THE ONLY TVR T440R IN THE WORLD Str8six are offering Supercar collectors an opportunity to invest in one of the rarest and most desirable British Motoring Icons - the unrepeatable TVR T440R.

The T440R was derived from TVR's T400R racecars, built for endurance racing at Spa, Sebring, the Le Mans 24 Hours,and the British GT series, in the hands of teams such as Eclipse, Peninsula, Chamberlain and LNT. The T440R was the only one of 4 road cars TVR created to obtain FIA homologation, which was built to the 4.2 litre specification.
Unlike the other three cars, the TVR Typhons, (which were conceived to run 4.0 litre supercharged engines with 6-speed sequential gearboxes, but which were never sold with this powertrain), the T440R was specified to run with a normally aspirated engine - with a larger capacity than the 4.0 litre race cars. And so it does, being equipped with a 4.2 litre engine incorporating a gas-flowed cylinder head, steel crankshaft and conrods, a carbon fibre air box with 6 upper injectors (12 in total for the 6 cylinders), and bespoke exhaust headers - to mention but some elements of this very special power plant. Most of the engine components are derived from the TVR race programme but the engine is detuned to 440 bhp for road use and durability. It features a large bore exhaust which exits at the rear, rather than on the nearside like the

No, what he's saying is that this car, with this body and this power won't ever reach the same speeds as the GT-R and Z06

So, what Apathy is saying is that the TVR cuts trough the air better than the GT-R and ZO6

Since when is a cd of .32 extraordinary?

The GTR's cd is under .3 and the Z06's cd is .31. Neither one will go over 200 and they both have more power then the TVR. Also, the TVR's frontal area is only slightly smaller than both cars, so they all probably have roughly the same drag area (frontal area times cd). And as you know, drag area (not drag coefficient by itself) is one of the most important figures in determining top speed.

Nice top speed!
So it's faster than the Murcielago Superveloce ? An Inline-6?
Naturally aspirated?!

your lost mother  11y ago

haha idiot this car have a drag iffecientcy of o.32 and it will hit 215mph and it is produced even clarkson review it !

@enzo ferrai
And that tried it to disperse?

It was renamed to the Tuscan R

Did it ever go into production?