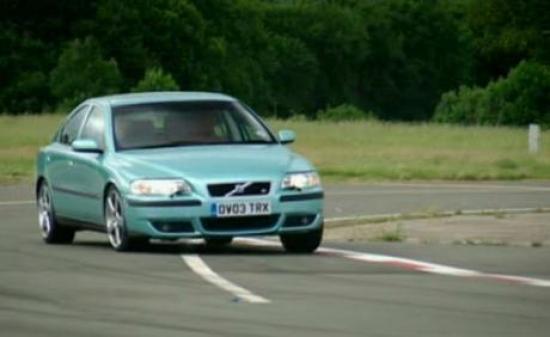 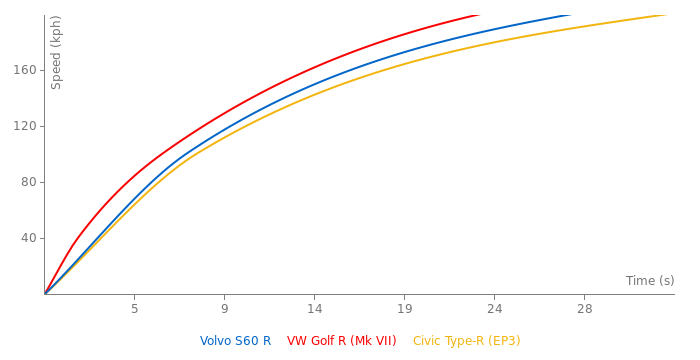 I've 2004 S60 R manual at 170,000 km at clock but fully revised to factory condition from engine to even seats, almost all electronic replaced. For S60R there's two main things to get best acceleration, first it must be at advanced mode for Max acceleration, second dstc must be completely disabled by pushing 5 times simultaneously, if you do these it accelerate 0-100 around 5,5 seconds, 0-200 around 21 seconds. I've this car for almost 7 years and I ate almost all cars at road because it's extremely road holding, I've also other fast cars as Audi C7 A6 3.0 TFSI and Skoda SuperB 2.0 TSI 280HP but R is completely different, at real roads it's king because of its extreme road holding which is due to it's clever 4C system.

I own an S60R manual and looking at your posts I agree either way. If you don't care about what breaks then you should lauch it at 5k rpm and never let go of the accelerator when changing gears...you will then get 5.0secs 0-100km/h. There is a slow boost response from the turbo everytime you lay off the accelerator to change gears which affects your 0-100km/h times significantly.

The power is 220 kw!
http://www.carfolio.com/specifications/models/car/?car=99660
Please change it!

The acceleration is OK in terms of sensation. The motor is not very smooth and dones't sound tht great, even wth a 3 inch exchaust.

If you are a 'street'racer, first, get off the street. Secondly this car isn't fast when strictly comparing numbers unless you launch it above 5k RPM.

The bigest dispontment for me is the ability to throttle steer the car and get good feedback from seat-of the pants roll and slip angle. I am onbviously doing this with all driver enahncements turned off (yes, I did hit the required button 5 times).

I bought the S0R 6spd man car so I can be conservative when visiting client and want to go out into the woldersness with mountin bikes and friends whtout having to put on and remove tmy Porsche Techuipment roof rack.

In sweden is it 5,7 confirmed

The 06-07's are a different animal due to drivetrain differences, changes to engine management/ driveline programs. My 07, 6 speed auto runs 86-87mph in the 1/8 mile. Only mods an EVOLVE reflash and 3.5 inch downpipe.

I have an S60R auto and also a 997 Carrera S. The volvo isn't great off the line, although I have had a little work done on it and ran an offical 14.2 qtr.
Suspension lets it down which I am trying to address atm.
Overall a great daily car, but I wouldn't pick it if I was in a real hurry, just for longer drives.

Have had 5+ years of experience with this car. A typical driver would be lucky to get 0-60 in 5.4 sec. This car is not easy to launch, does not feel fast, has angle gear problems requiring replacement, and simply is not reliably fast off the line. Handling wise, be warned the turning radius sucks, the Anti-Skid DEM has been shown to fail and require replacement. Those that rave about its "speed" are S60R owners that are either disillusioned or being biased in my opinion. I do agree with others that state ambient temperature and gas quality affect acceleration. There is a notable difference with temp below ~50 deg F versus above.

I own a S60R. There has been a lot of discussion about its performance in the Netherlands, where the car has been tested and they found a 0-100kph time of 7,7 seconds for the V70R (mind you the weather was very hot at the time: 30C or 86F).

Later, they re-tested the cars when the weather was normal (it was a december morning, so probably around 10C / 50F), and their retest showed a 0-100 time of 5,6 seconds for the S60R (0,1 faster than factory specs) and 5,8 for the V70R (again 0,1 faster). Not just the weather but the usage of cheaper RON95 gasoline (instead of RON98) caused the difference. The evidence is in Dutch: http://www.swededemon.com/images/ext/autovisier30104.jpg

I can tell you I do believe it will manage 0-100 in 5.7 seconds if you shift at the right time. However you do need the premium fuel for this turbocharged car, something that isn't necessary for a big V8 like the Jag XJR that's described in another comment.

The car is very comfortable to drive and I feel it's powerful enough (especially when revving high).

More of the power discussion can be found here:
http://www.swededemon.com/v70rhtml/enough.html

I think the car does deserve the 5.7 status though, as you can read in Dutch (run some of the passages at the end through Googles translator if you don't believe me).

I own one of these(Manual transmision) and also a Jaguar XJR8(308 model with automatic transmision). I believe the 0-60mph factory figures are 5.4 for the Volvo and 5.3 for the Jag(fractionaly longer for the 0-100kph)so pretty similar on paper.I've got to say the Volvo feels much slower during hard acceleration, (although I've never timed it) so I wouldn't be surpised if the factory figures are a second or so adrift!Having said that I've heard that very few of these cars actually leave the factory with the claimed 300bhp and generally require tuning to reach this figure.Again I wouldn't disagree or it may just be that I've got a slow one.I guess no two cars are the same.

This car does 0-60mph in 5.4s and 0-100kmh in 5.7s and that is true.
Different magazines will post different numbers, that's why we don't cross finish line all together at the track.

a few more dollars  14y ago

i'm buying one soon so i will test it and settle this once and forever.peace

The slow laptimes shows that the car is not a burner..

The only real test of the S60 R with real tested 0-100km/h perfromance is from sportauto they clocked the 6.3s

Please give us some clue on what media tested this car and got these 0-100 figures. We can't change anything if we are not sure that your claims are valid. 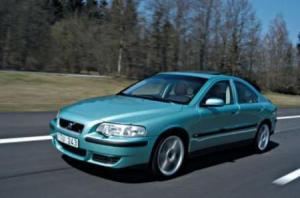 Very good although you should've increased the peak speed to 288km/h. The GPS speedo ...

Is this even a production car? I was trying to search ...

One of the more beautiful new cars. The slightly upward sloping, ...

Turbo lost out to GT-R in acceleration because many of them ...

Facts have no authors. The test results are what they are. ...

Added non-road-legal tyre status and notice: "Vehicle was not on road-legal ...