This time should be marked with a 'd' because it was damp. 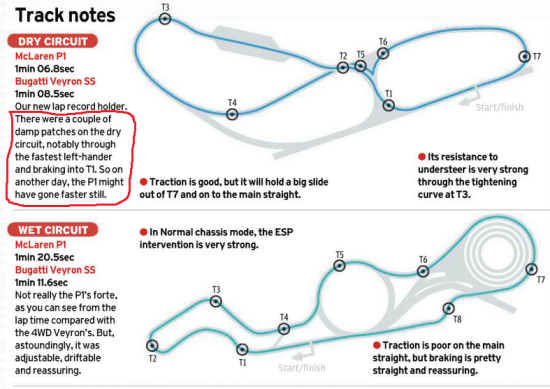 at least the p1 has 1 laptime unlike the laferrari (fiorano doesn't count) what I gotta see is a nurburgring laptime from either car, or at least a comparison between the three

La Ferrari already all sold out, so if you have a lot of money and you want to buy the fastest road car on the track, you have to choose between 918 and P1. It would be interesting to see a comparison test on the track between 918 and P1 in the same conditions. If La Ferrari would bee added - it would be all super.
Seems to me it is not so clear that P1 will be faster, do not underestimate the Porsche. Assume that P1 will be a somewhat faster than the standard 918, but a bit slower than Weissach package, though I could be wrong, we'll see.
As for La Ferrari - it's hard to say, there are very few information about this hypercar yet. I think, being the most powerful of this super trio, it will have best acceleration at high speeds, and will be the most fun to drive. As for track performance, I wouldn't be surprised if it would concede Porsche and McLaren, as the creators of these vehicles initially proclaimed different tasks. McLaren and Porsche took to create the fastest on the track production road legal cars; Ferrari claim was to create a supercar that will give maximum driving pleasure, bringing the driver as much as possible to the world of Formula 1.
Nevertheless, each of these cars is great, being the apex of modern engineering thought. It will be very exciting to watch their battle on tracks around the world. Time will tell who is the fastest.

"The P1 might have lapped even faster but for two damp patches; one in a high-speed bend, the other in a heavy braking zone."

It should have all 1st places on all dry tracks, until LaFerrari would come.

Idk bout you but i think this car competes more directly with the LaFerrari.

1-st place as expected. Now we all looking forward to comparo with 918.

The lap time is somewhat slower than it looks.

That's with the redline increased to 7000rpm.

The Corvette was NEVER a GT-R competitor in the first place. ...

I don't see anything particularly wrong with the Ghibli's interior(?) ...