Some deep stuff in here. Jesus. They were hardcore.

Yeah and they never thought it would be wise to put back the roof on the 918 before they actually ring it out for a lap.

Yet the "representative" lap of a P1 is to take a P1 from the factory and change to the stickiest tires.

At 7:35 Evo have acknowledged the P1's 1:11.2 as the more representative P1 time following tyre revelations!

Nope its just you...

Maybe you just have a double negative because you're pretending to know better than the chief of GT car development at Porsche.

I 'll call it questionable, However, Mal 2-2 miraculous return does seem to be quite timely. I remember that Spat you had with him A few years ago on the MP4 page sounds vaguely familiar...and there's the double negative marked on most of our posts...

Lol I did not remember he posted as Mycroft in Macca forum.

manone - let's compare apples to apples here. He's 10s off a time set by Timo Kluck who's a factory driver. Sport Auto's pro driver, Horst von Sauma, only managed 3s better (7:32), which is next to nothing on the 'ring and may be down to ambient conditions.

Well we didn't have those conditions in Chris Harris's tyre test either. The Cup 2 laps were ran the previous day during his Car of the Year competition (all cars on stock tyres), the Trofeo R laps were ran the day after. Mechanics on the scene adjusted pressure in the 458S tyres and the Trofeo R tyres, Cup 2s on GT3 were ran as was.

Not that I even think the difference would be as large as the 3s you suggest but even if we had a few seconds from the comparable lap splits that would still only put the 458S 4s ahead on the Trofeo Rs at Monza, which are supposed to be 2s faster than Cup 2s, yet it was 4s faster even with Cup 2s at Portimao. So either way Chris Harris's tyre test is bollox, as is the 4s 458S to GT3 delta on Cup 2s.

sroser: yes he is pro-level, but most likely not pro, meaning he does not do that for a living. btw, he is 10secs off the time set by a pro and he admittedly states that he is much more used to drive gt3s on n-ring then his own speciale.

in order to compare to subseconds-levels lap times of two cars you need, at the very least, all the following: 1. the same pro-level driver on the two cars 2. the cars driven back to back in the same track conditions 3. the cas baing in the same full working order.

in this case we have none of them, thus we can easily have few seconds discrepancies from their respective comparable lap splits.

Sure the 458S can be 2s faster on a GP length circuit, that's what I'd expect on most occasions..... but not 4s! That was just Chris Harris being a dummy and different tyre pressures taking affect. It will never be 2-2.5s/minute faster though.

sroser: "Both Monza laps were driven by pros, the GT3 has light traffic, the 458S none."
no, they are not pro. the driver of 458s is the owner, probably also gt3's is. gt3 traffic in the timed lap is absolutely uninfluential as anybody can see from the linked video.

as for the other circuit's lap times. in much slower tracks (such as vairano) gt3 may be close to 458S,as well as on german magazines
lap times (for very different reasons!). but again given the differences in performance of the base platforms, all the rules being equal, it is of no surprise if 458S is 2-2.5 secs faster than gt3 per minute in a f1-class circuit.

Where are the braking issues ?
No squarelling at all.
Ah another piece of rubbish

Actually it was just over-cautious driving. He was probably scared of stacking a customer car into the amco. The P1's brakes are not worse. All the deceleration curves of the P1 are just as steep, or steeper (in the case of going into T6 and T7) than the 918's.

The only issue is that he's braking too early. See T9 ezpecially, brakes half a year too soon then goes round the corner 2mph faster. Also slowed down too early for T10 and drive around it faster. Then you have T6! Aside from the fact he fluffed entry by going in too soon (same as on T2), the speed of 73.6mph is 5mph slower than he managed on other laps. T3 is also way too slow. Just watch the video, he could have carried more speed. 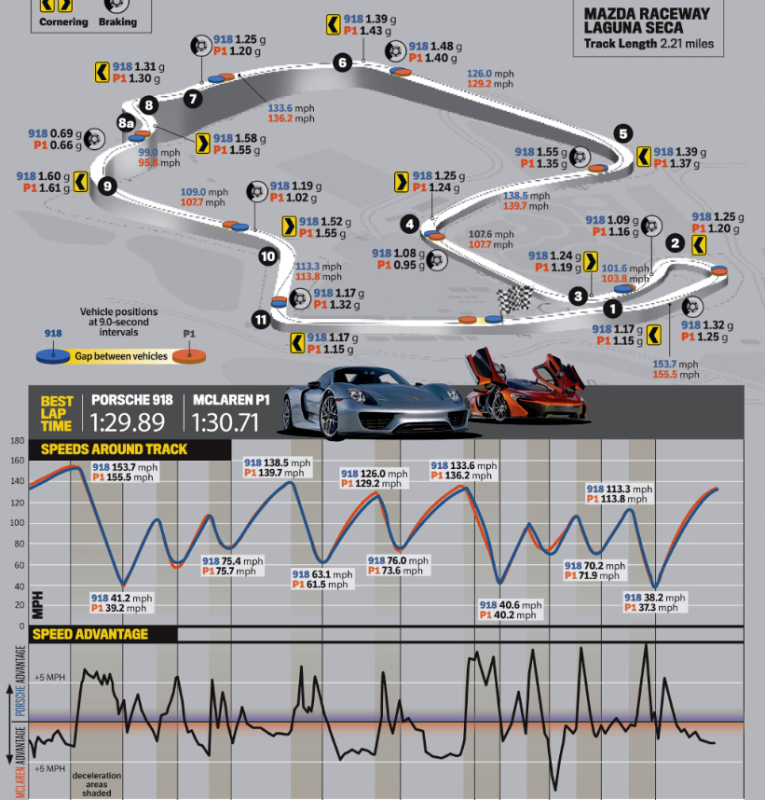 Grasp, grasp, Grasp.
Rolling resistance and grip are directly proportional. So 3 weeks ago N1 > N0. Today are the same tires.
Always at your convenience. A real clown.

Turns out they're the same tyre, as stated by the Andreas Preuninger - head of Porsche GT car development... twice!

What about tread wear rating? How come that is the same? Because they 'ratings' are not to be taken at face value.

If you believe the GT3 RS and 918 don't have the same tyre, go argue it out with Andreas Preuninger.

"I'm sorry to take you away from Porsche GT car development, but I believe the facts you have given on your own developments are wrong."

I 'll call it questionable, However, Mal 2-2 miraculous return does seem to be quite timely. I remember that Spat you had with him A few years ago on the MP4 page sounds vaguely familiar...and there's the double negative marked on most of our posts...

The only explanation is a brake issue at Laguna.

Where are the braking issues ?
No squarelling at all.
Ah another piece of rubbish

You can have the same compound and different load index/eco rating because they depend on tyre inner and outer circumference and inflation pressure. When pressure changes so does economy. Probably something to do with the 918 running 40psi for road use.

Grasp, grasp, Grasp.
Rolling resistance and grip are directly proportional.
From Mclife about 3 weeks ago

So 3 weeks ago N1 > N0. Today are the same tires.
Always at your convenience. A real clown.

Both Monza laps were driven by pros, the GT3 has light traffic, the 458S none. The 458S is 1.2s faster on Trofeo Rs which is about what you'd expect, even on Cup 2s.

That's the difference people are seeing, not some BS tyre delta that certain Porsche nuts want people to believe. That said the GT3 Cup 2 isn't even the same compound as the 918 Cup 2 as Andreas Preuninger has stated.

Manone - It's definitely faster but not by that much, an expected delta would be less than 2s, not 4s on a 2 minute lap. The GT3 is very low drag and accelerates exceptionally well at high speed despite lower power.

"Yet 458S was 4s faster on Cup 2s at Portimao,... It's more likely he just set a shit time with the Cup 2s and then beat it with the Trofeo Rs by driving better given his delta."

i am one not trusting christ harris a bit. i do not see however why one should be surprised to see that 458S is 5 seconds faster than a 991gt3, every 2 minutes.
on full fledged circuits around the world, 458 platform has consistently shown to be better than 997-991's for years, complying with gt-series technical rules, which imply same power to weight ratio for all cars (except for possibly varying ballast), in particular.
thus, i do not see why one would be surprised when a speciale is so much faster than 991gt3 in a 100+hp higher configuration that the porsche.