Some sources say that STO and Perfomante laptimes at Daytona were computer simulations based on real GT3 Evo laptime... 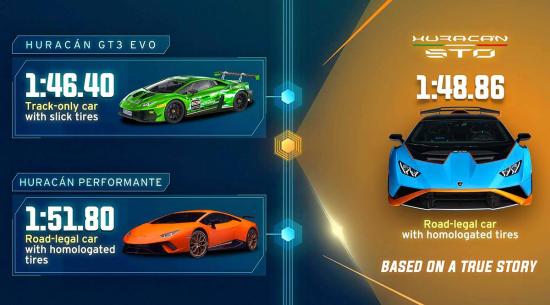 Who are these sources? It is my view that if any one of the Lambo factory GT3 drivers ie. Mapelli, Bortolotti or Calderalli were behind the wheel(highly likely) then the 1:48.86 is actually a real lap time not a computer simulation. Of course if you've got evidence to the contrary i'd love to see it lol

One of the sources:

Sorry, it's in Russian here. Here is part of the text translation:
"The GTD class Huracan GT3 Evo raced on slicks and won the pole at Daytona, clocking 1 minute 46.40 seconds. Computer simulations showed that the production Huracan Performante would lap five seconds slower in 1:51.80 in the same conditions on road tyres. And the Huracan STO on its road tyres in 1:48:86."
Another source is Autopanarama magazine, I'll try to post a scan later if needed (it's in Russian too though).
I can't vouch that this information is 100% reliable. But I tried to find some photo or video proofs of Perfomante and STO testing at Daytona, and unfortunately found nothing. Also, the official Lamborghini website and other sources such as Motortrend, C&D and others, do not indicate that STO was actually tested or who was the driver. Instead the wording "STO can lap a Daytona in ..." is used everywhere.

Don't get me wrong, the Huracan STO is a great car and I'm not trying to belittle it in any way. Even if it's not faster on the track than the SVJ and Perfomante, it's still much more interesting in terms of emotion and trackdays experience.
But if the times at Daytona are just modelling, and given recent Lambo's attempts to cheat at the Nürburgring, then it seems that Lamborghini wants to give the impression that STO is faster at the track than it really is. And it looks rather clumsy and inappropriate.

If Lamborghini did not actually test both the STO and Performante at the Daytona Road Course and they are simulated figures then not only should the lap time be removed but they deserve to be called out for the bullshit because that's unacceptable...

I haven't read the article but what the FK are Lamborghini doing of late? I hope to GOD this is false.

In this case, they can be left as estimated.

Well 3 seconds faster than the Huracan Performante is a big deal. If it manages to replicate this kind of times it could beat the AMG BS, the sf90, the 765lt and the gt2rs MR on the track, or at least be in the same league. On a straight line though it would lose to all of them exept the AMG, which accelerates slower off the line but faster at higher speeds. This Lambo is a bi down on power bu still... I admire Lamborghini for their refusal to abandon NA engines!

Question is, did they close up those air vents and replaced the windshield with plastic like they did with their Nurburgring record?

We're going to get some idea when independent tests commence sometime soon but given the Nurb idiocy who knows?

the deafening silence from Lamborghini speaks volumes about what happened that day at the ring.

Ahahaha! Absolutely and resolutely not! ;)

He can't handle the truth...