2013 Chevrolet Camaro Z/28 completed a lap of Nürburgring Nordschleife in 7 minutes and 37.5 seconds.

This is a really impressive time! Especially for all the rain in the last couple minutes of that lap. And it's only worsewhen you have wide tires (305's)in the front!
GM's driver has some serious balls, was it Aaron Link?
I'd say it can probably drop another 3-5 seconds on a dry lap.

I can't wait to see some head-to-heads(same track/driver/conditions)... Ford certainly has their work cut our for them, lets hope they deliver like Chevy did. :)

The base C7 Stingray is not gonna beat this thing around any track unless it swaps for this car's aero and tires.

...Too be brutally honest, I think I was expecting more, I don't see the StingRay beating this around a track either..

Very impressive laptime. Being as fast as the 991 Carrera S deserves a huge respect. And some say American cars cannot go round corners?... huh

Making a conclusion out of this laptimes, I predict C7 Stingray Z51 to finish the ring in 7:34.xx. As for a base Corvette that would be embarrassing for others. I'm afraid to imagine what the next Z06/ZR1 would be capable to do.

Looks like a really fun car, struugled in the damp because of those Pirelli PZero Trofeo R P305/30ZR19 on all four corners. I don't think I've ever seen such wide tires on front.

Anonimity is Great  10y ago

What's really really impressive is how this car beats the Carrera S despite having slower top speed at the end of the long straight! its 161mph (z28) vs 168mph (Carrera S)!! Doesn't this mean the American car corners better than the germans?? Amazing, really! 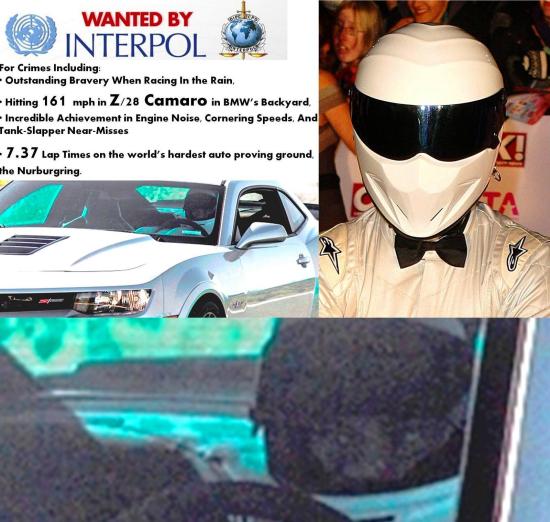 I said most likely not because I just don't see how a Camaro, as great of a car as it is, could outperform a Corvette with the exact same engine.

So after half of century and great pure sport cars like bmw m3, nissan skyline, porsche 911, mazda rx-7 etc., camaro just join the club and prove that it actually can go around a corner? That's fuc*ing impressive! In 2063 it will destroy nissan and porsche. FEEEEEEEAR IT!!

I was kind of expecting a faster time after all that hype. But still impressive.

@Shaggy
Depends. If it were the older Z06, with the crappy Goodyear tires, I'd give the edge to the Z/28. The Z06 would certainly outpace it in acceleration, but the Z/28 would be able to brake later going into corners and carry more speed through. I don't think the 'Vette's straightline speed would be enough to compensate for those shite Goodyear Eagle F1s.

@Georg
3 seconds is huge, even on a track as long as the N'Ring. In a head-to-head race, that's an ass-whooping. Wholesale slaughter. It may not seem like much over a span of 7+ minutes, but think about the distance that would be between the first car crossing the finishline, and the second car coming in 3secs later. Conventional wisdom says that every 10th of a second is about equal to a car length. Let's say that's around 15ft. Using that, the distance between the 1st and 2nd car would be some 450ft. About a football field and a half, for Americans like myself.

And it's not just the rain, but the overall conditions and the car itself. Though it was only raining on one section, it looked like a pretty cold day, and a cold track is already a strike against any car riding on R-compound tires. Honestly, it's amazing the thing didn't spin out or slide into the grass(or a wall), even before the wet parts.

two turns of the northloop with rain and u call it wet lap.... come on guys it was only raining at kleines Karusell and the last turn to the long Doettinger Höhe straight. The rest of the track was perfectly dry.
I guess the rain has cost the Z28 3seconds maximum

@ Fastestlaps: Most likely not.

its a damp lap at best, not wet.
still, its one sick laptime.

I would not call it a wet lap.

It wasnt so wet, for most of the track it was ok. But for sure it wasnt the same like it could be on hot tramac in mid of the summer.

With it, there is possibility for few seconds cut, maybe 3s, but... wait a minute, its starting to race with 911 turbos, Zondas, R8's.
Thats a one good handling muscle car.

..Still...That Splitter and those Prelude lights-_-

Bugatti4Life the real one 6h