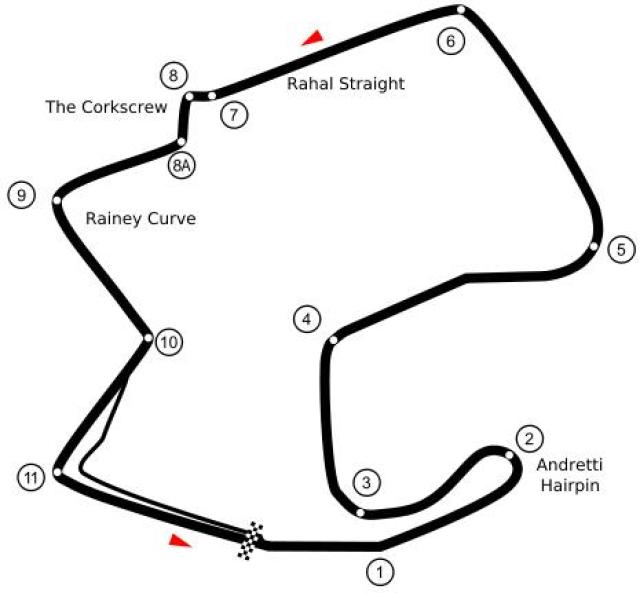 Mazda Raceway Laguna Seca is a paved road racing track used for both auto racing and motorcycle racing, originally constructed in 1957 near Monterey, California, USA. The current racetrack is 2.238 miles in length (3.602 kilometers), has eleven turns, including the famous "Corkscrew" at Turns 8 and 8A, and a 300 foot (91 m) elevation change. A variety of racing, exhibition and entertainment events are held at the raceway, ranging from superkarts to American Le Mans racing to music festivals.

Are current cars continually added to this list? When was the last update?

Can we please add below Tesla Plaid laptime?

Quote>"Tesla posted an onboard video of the Model S Plaid’s Laguna Seca lap, and we’ll spoil it right now—this EV is wickedly fast. Tesla didn’t strip the interior or run a trick suspension setup, either; the car was wearing a set of Michelin Sport Cup 2 tires that will soon be available on the production model, and the ONLY MODIFICATION to the car was the installation of a racing bucket seat."

The car is stock production and the video plus GPS are below.

Could we please add also the Lucid Air laptime set by the factory. The Unplugged Tesla laptime has been added? Mark it pre production prototype or whatever!~ It's only fair and more importantly consistent. These cars have a stigma attached to them regards racetracks and laptimes! But they are bloody quick!

I only found out because of someone on Mclaren Life! It is what it is!🙂

It's one thing to read that a car, in this case the 1,100-horsepower tri-motor Tesla Model S Plaid, is fast. It's quite another to see visual evidence in the form of an in-camera video of the tartan-Tesla lapping Laguna Seca in 1:30.3 seconds. Now, thanks to the magic that is the Internet, you can witness the next best thing to being the person belted into the driver's seat by watching the video up above.

Speaking of the driver, this is apparently well-known YouTuber Sebastian Vittel (not to be confused with F1 driver Sebastian Vettel) behind the wheel. Vittel, which we will assume is an alias, says the S Plaid was on a custom set of Michelin Sport Cup 2 tires that will be released along with the vehicle when it goes on sale in late 2021. The only modification to the vehicle, according to the video description, was a replacement bucket seat that was installed for safety reasons.

To put a 1:30.3 lap in perspective, it's just a few seconds shy of the McLaren Senna, which set a production car record of 1:27.62 when Motor Trend had it at the track. It's also faster than any published time recorded by a prototype Lucid Air, an electric sedan that ought to compete with Tesla's best once it actually goes on sale. Tesla CEO Elon Musk hinted that there are a few seconds to be gained at the track, suggesting that the Model S Plaid will eventually hold, not just the electric vehicle record, but the outright production-vehicle record at Laguna Seca.

We look forward to watching Lucid, Tesla and Porsche continue to battle for electric-sedan track superiority."" <Yes we absolutely do!🔥

Where are the 2 wheel times? 👊

If you filter out non road legal that silly Unplugged Performance time still shows up, even though that thing had racing slicks, stripped interior, etc.

I know tesla fanboys like lying but come on now, don't kill the credibility of this site.

Why hasn't the new lap record been updated? The Tesla that was heavily modified was? OO @fastestlaps

Quote>"The 1233bhp hyper-hybrid was sent around the 2.24-mile course, with professional racer Joel Millar at the wheel, in just 1min 25.44secs, far outpacing the previous record of 1min 27.62secs set by the McLaren Senna in 2019. Conditions were described as "ideal" and the car used road-legal Michelin Pilot Sport Cup2R tyres."

Will Wattanawongkiri just beat his best time in his modified GT3 with a 1:31.84 https://youtu.be/NKr-t_yMitQ

Congrats Tesla! Who else can break 1:30 with a roomy four door family sedan that gets 100 MPGe? Most cars that can do that (and there's precious few) are lucky to get 15 MPG.

Maybe the Porsche Taycan? Ooops, not roomy, not a family sedan and way too slow!

This is price vs Laguna Seca performance plot created by @ilias.

As you can see, there is almost pure nonlinear function in how price explodes higher as you squeeze out last seconds from the Laguna Seca lap time.

Good example of "diminishing returns" law, which we see almost in any kind of product or service - the most specialist, most well made or very best performing product will sometimes cost multiples more than nearest rival, even if value difference is negligable.

For cars there are other strong factors that affect price - for example, Porsche 911 GT2 RS has very high collector appeal and you have to pay huge exclusivity premium on top of what you would expect to pay for the high performance.

Given enough market liquidity, there really is no such thing as "overpriced car". Prices are function of demand and availability. 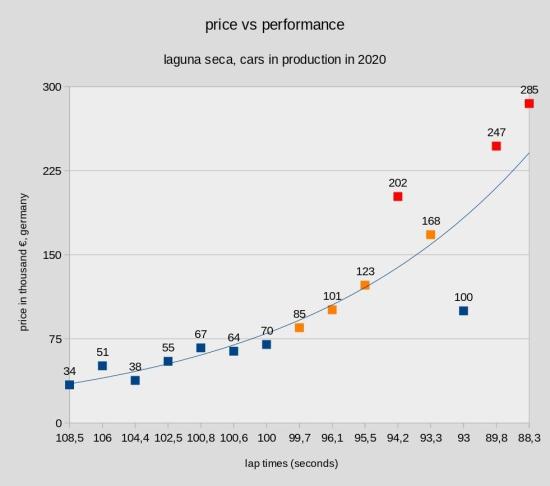 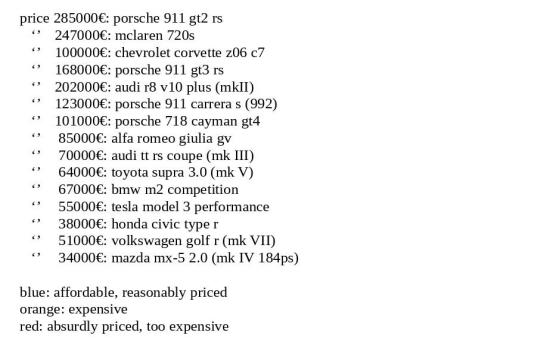 did you ever wonder, what sports cars are worth their price? I have.
so here I present to you all cars available for sale in 2020, that raced on laguna seca, and whether they deserve their price tag or not.

Huayra BC did 1:28.5 with Randy himself driving