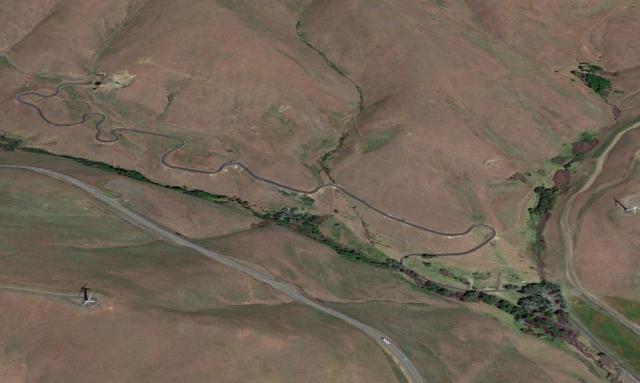 The Maryhill Loops Road was an experimental road in south central Washington, United States, built by Good Roads promoter Samuel Hill with the help of engineer and landscape architect Samuel C. Lancaster. Climbing the Columbia Hills from the Columbia River and Spokane, Portland and Seattle Railway to his planned Quaker utopian community at Maryhill, Washington. Built in 1911 as the first asphalt road in the state, and bypassed by the present U.S. Route 97 after World War II, the road achieved low grades with horseshoe curves. The design became the model for the Figure-Eight Loops on the Historic Columbia River Highway in Oregon, designed by Lancaster several years later. The road is now owned by the Maryhill Museum of Art. This 2-mile stretch of paved blacktop has 25 curves, at least four of them hairpins, and an average grade of 5%.