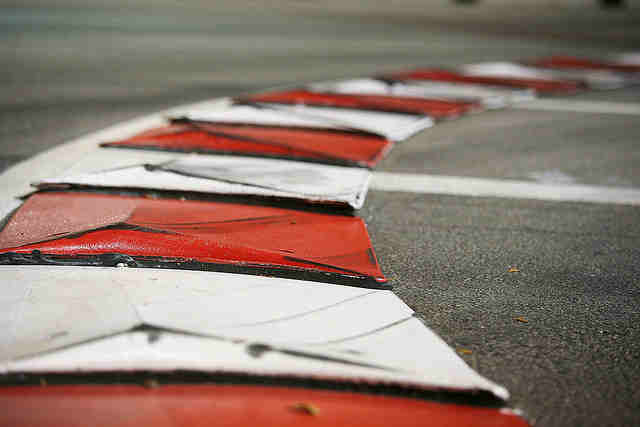 Mendig AFB Circuit is a racing venue in Germany with 119 lap times.This page represents the 4.2 kilometer (2.6 mile) configuration of this track.

Wtf are these laptimes??? The 911 turbo S is quicker than the gt3rs? The Pista is almost a whole second quicker than the Black Series?? (Well, that could be explained by Ferrari giving an improved car than what customers get but I thought Ferrari stopped that).Both porsches (GT3 RS and Turbo S) are quicker than a performanté??? And a 570s is over 1 and a ¼ seconds quicker than a Z06?? What's the deal?

If you look at the track map (which is essentially a bunch of straights and 90-degree corners) and the fact that the runes take place from a standing start, things suddenly become more clear.
Due to these factors, cars with better straight-line acceleration are more successful at Mendig.
In addition, the semi-slick tyres and stiff suspension here on concrete slabs do not offer the same grip advantage as on a smooth asphalt surface.

In Car & Driver's full instrumented test a narrow-body Hellcat Charger was just as quick to 150 mph (high-15 range) as a 992-gen Porsche GT3 or Carrera GTS.

19.2 sec for the Hellcat Charger https://imgur.com/a/MNm7S

Well, E63 is much faster on the straight.

My god dude why do you hate the Hellcat so much? The Hellcat absolutely beats ANY Cayman except for the GT4 RS

Not on track at all

Cry bitch, this is the kind of girls you simp to that'll never get back to you inept soyboy

dodgy hellboat is the worst handling car of all times

I am no Bmw or should i say, bullshit motor works fanboy

Compared to its midsize companions yes, full-size ones no

On the track: E63 and M5 > Hellcat, but S63 (and especially S65) and M760 < Hellcat. Previous gen S8 Plus is equal to Hellcat thanks to shorter wheelbase and virtually identical exterior bodywork and weight in spite of AWD.

I don't think the original Hellcat is faster than the current M5, but it surely has an advantage over the previous one. The Hellcat Widebody can keep up with the current M550i xDrive in straight-line performance, and the Redeye Widebody is an M5 competitor.

I think Hellcats are overrated because they're made popular on social media by urban/inner city Hoodville clouts and Dodge is overtly concerned about competitors getting closer and closer to the horsepower game while not emphasizing on the chassis of its cars, even if the tires are indeed "good" enough for the track. They're also underrated because magazines refuse to compare them to a similarly powerful Cadillac or German sedan.

I'd rather have a Cadillac CT5-V Blackwing.

Your arguments will get you nowhere, hellboat is hellboat, whether it's a Dodge or a Cadillac.

The GT and Turbo cars are actually more comparable to the Viper. The reason why Dodge hasn't made a track version of their Hellcat is because Dodge has simply decided to head toward a different direction than even Chevy and Ford, putting more focus on dragstrip performance than track performance. That to me is a good thing because it's like building a better version of you at the gym with self-discipline which relatively helps with getting the right girl with the right mindset. All this nonsense talk about track performance, girls really don't care about. Most girls feel more feminine when a guy takes them out for a joyride on a freeway, not on small twisty turn roads. Chevy Camaro/Corvette and Ford Mustang were possibly chick magnets 20-30 years ago, but that's not the case anymore.

While Dodge is the only one currently with a traditionalist and sigma muscle-car mindset, the Hellcat twins' chassis have roots dating back to 2004 (accounting for the then-new LX platform which is an evolution of the LH albeit with Mercedes parts added-on).

The Hellcats may not be faster than most cars with identical straight-line metrics on a road course, but they are faster than F430/575M and original Gallardo/Murcielago + even the SLR McLaren under ALL circumstances, the benchmark supercars of the 2000s.

No one cares about that car.

This should be added. Why has this not been added?

@fastestlaps There are more than 150 lap times on this circuit, make sure you add as many as possible

Hello Christian, I think it is time to test some Teslas. Everyone will be watching with big interest. Is the future is faster than the past?

Where is the Ferrari 488 Pista? I thought there was a new record?

Anyone saw the episode where Porsche 911 GT3 Carrera Cup was tested? It really obliterated everything! I cannot find video anywhere though. I watched it on AMS TV.

There are more than 100 real laptimes in the internet for this track.
Why nobody adds them?

Anybody know something about if there is the track mendig builded to assetto corsa , but i mean the christian menzel fastlap track which is on the airfield not the one just passing the airfield.
There will be good to have also the laptimes for that track for some of cars wich is made already in assetto corsa to have a good testrun for comparsion.

Here you have 70 position on this track

https://www.thelist.com/739488/where-is-lularoe-founder-mark-stidham-today/ Quote>"As for the $4 million settlement the company paid in 2021, State Attorney ...

So this is your colleague? wasn't this guy a scammer back in a day? ...

I would look at how much each costs. If CSL is super excluse / ...